Oo La La! Welcome back for Part 3 of Potato Quartet!

Start at the beginning here.

Ms. Potage Fry was born to a family of humble Russets near a farm that produced the best in the world. Her mother was a little dry, and her father a little wet. Their house was potato underground, and as the potatoes of this region were considered unpredictable, they were often ignored, and Potage grew up without big dreams. One day she saw, through more than one of her eyes, that there was to be a contest to find the potato perfect for frying. In this region were born the best potatoes, and the leading families had invented a test for all of the candidates. Potage longed to try out; her family, however, had suffered from wild gossip and scorn: their children were either dry or wet—never ideal. 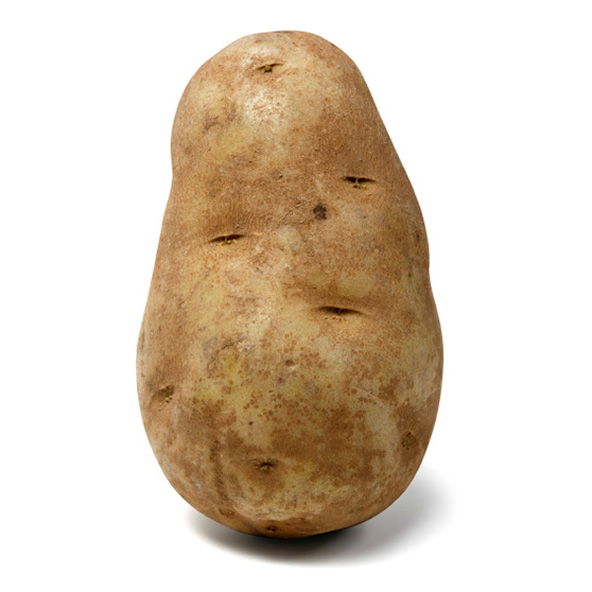 But Potage, remembering her grandmother (the last in the family to be chosen for restaurant fare in far-away Paris), wracked her brain to think whether she’d once known the method. She was good at science, and she remembered about gravity and some kind of swimming pool in which some potatoes sank, and some floated. And some—the winners—did neither. She recalled talk about a fine farm over the hill with a precise testing station, packed a small suitcase, and went to McDonald’s; literally billions of people adored these potatoes, and she had grown wealthy from this fine line of spuds.

In a large, immaculate barn, she had installed two tanks to test the floating (or sinking) of potatoes as above. Into the first, she made a tub of brine at 9% relative to the weight of the water, which was 8.25% at salinity. Then, into a second tub, she placed the larger 12% salt relative to the weight of water at 10.7% salinity. Each candidate, wearing an attractive swimsuit, dove into the first tank containing the 8% salt. If she sank, that meant she wasn’t too wet. Then she dove into the 12% pool, and if she wasn’t too dry, she would float in this pool. It was a double test, one she was very willing to take, though she was more of an earth than ocean girl, and had only very recently learned how to swim. (By the way, the sinkers were quickly brought back to the surface.) 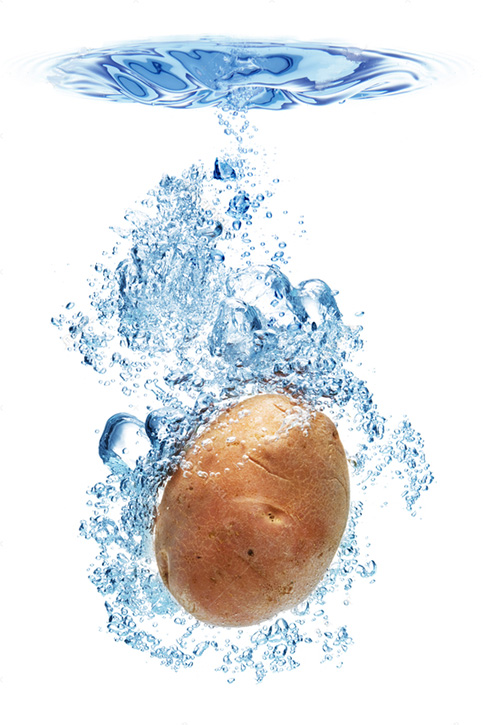 These potatoes’ quality was based on gravity. Drop potatoes of the same crop into the pools, and gravity would give the verdict: potatoes that aren’t too wet would sink, and those too dry would float. Potage snapped the leg of her new bronze-colored suit, as swimming contestants often do. She pulled her swim cap away from her ear, and let it snap back. Her ears and eyes were ready. Her mother was in the stand, having finally worked up a little faith in her daughter, who’d always wanted more.

Placing nose plugs of pliable, white rubber on all of her noses, and foregoing goggles, she jumped into the first swimming pool. Her relatives gasped, and when she didn’t appear for the three seconds required for full emersion, she broke her sinking and quickly rose to the surface. There was cheering and she was greatly encouraged. 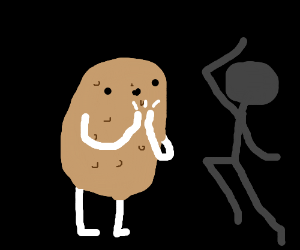 The second pool still awaited that opposite test. With one big gulp of air, Potage waited for her turn—four or five potatoes in front of her—and when it came, she plunged in, and went nearly to the floor of the pool, and paused (some spectators thinking she’d drop to the bottom—far too dry.) In an interval that seemed like forever, with a great whoosh of water shooting up into the air, she rose up like a swan on the strong currents of a fountain, spread her arms, then wiped real tears from her several eyes. She looked around: there were no contestants still standing. Potage had passed the test.

She was given a large trophy and a wide red satin ceremonial ribbon was placed diagonally across her body (to signify the craftspeople of ketchup). Now she would go to the big city where her naturally lean body would be trained into a long and thin shape. Then she would be given a golden tan—one with no harmful rays—and be chosen for further accomplishments, along with stars from other farm countries, local, national and overseas. Her family, embarrassed to have doubted her, made their apologies, which Potage gracefully accepted, and she went on to become the spokeswoman for French Fries, the national dish for many millions of Americans and many other nationalities from babies to oldsters. Rated at the top grade—the officials anointed her with finely-ground sea salt and red ribbons. 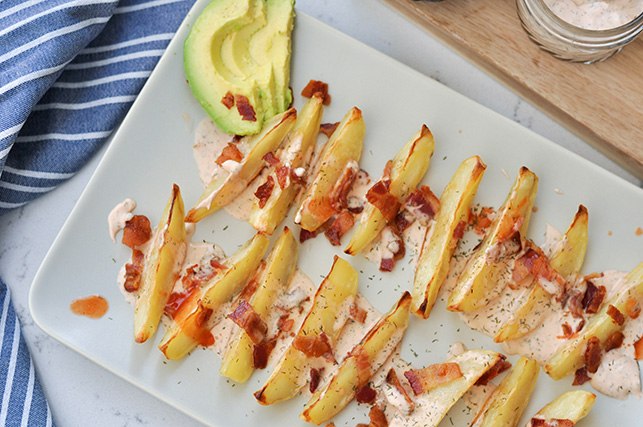 Potage gracefully lent moral support to other potatoes: red, new, Yukon Gold, sweet potatoes, Valley Fine, button potatoes, French brown potatoes, peel-less potatoes, cluster potatoes, giant roasting potatoes, Irish whites, Kenyan elephant-skins, Guyanese skinless potatoes, and Lausanne pinks. Then she went on to the great French Cordon Bleu roles where she visited her French cousins-by-decree: pommes lyonnaise, pommes gratin dauphinoise, including scalloped potatoes, aligot mashed potatoes, tartiflette, leek soup, and hachis parmentier casserole. When asked to give advice, Potage said: Put your own potatoes to the test; find the ones who neither sink nor swim, slim them down and tan all your lovely ladies, for at least one winner will pass both tests.

Come back next Tuesday for the fourth (and final) installment of Potato Quartet!