Editor’s note: Two more potato relatives have been unearthed and found their histories linked; from the Andes to Dublin (and from Oxford to Kiev). We can safely say that the Potato family is ubiquitous and found everywhere. We here introduce Ms. Pomme de Terre Frite, and her distant cousin, Ms. Pomme Puree. They are earthy souls and when they were born the bells in the cathedrals peeled. We thereby rename the group THE POTATO QUARTET, THE POTATO SEXTET. We mean six, of course.

POMME DE TERRE is descended from the families of queens who made a happy mistake in the early 1800’s and deep-fried some potato slices, which were quite thin. Ms. Pomme, herself, was as they say in Venezuela, “delgada,” which means slender, and because her foundation had an earthy scent of dirt and water and sunshine, and since she preferred cellars — root cellars — and dark places, you would likely find her in basement-level cafes, where the air was cool and dry and her maquillage stayed perfectly in place.

She was a chip off the old block. She was said to actually moisturize her fair skin with goose fat, though some said butter (others, bacon); however, she was delectable no matter the face cream. At first she applied very little color to her face, but a century passed (rather like Orlando’s centuries of our Virginia Woolf), and the luxury of salt was applied to her ear lobes, and she then found herself holding the power of the hard-to-resist woman who, like so many wonderful appetizers, was over consumed, after which one could hardly go on to dinner, only toyed with one’s steak. Poor Ms. Pomme would subsequently always appear ill, which was blamed on Ms. Frite, who in defiance went without makeup for a week. 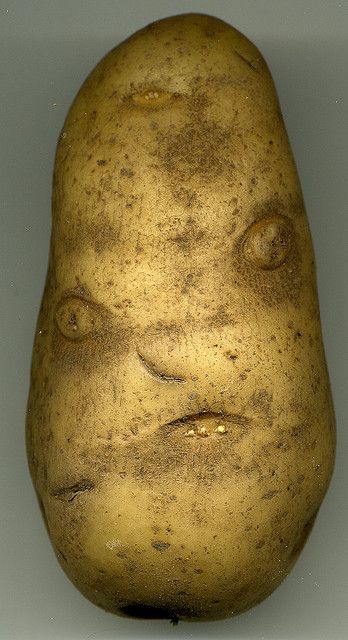 Well, she could not let this gossip derail her, so she resumed her morning routine, and all the gossip was stopped, and the populace was so relieved that they sat wherever they found Ms. Frite and admired her and pretended to pet her (but were too polite to do so) and her comments, it must be admitted, were rather salty. For the Welsh relatives had made her a gift of sea salt and good local vinegar, and her cheeks turned golden, and her hair (ah, her hair!) was rippled and grooved and so wavy that you could hardly see her beautiful big brown eyes.

The Brits called her Miss Crisp and many other countries added their own perfumes, of shrimp and seaweed and honey and in the States, barbecue—actually one of the first of the new scents. The Thai nation gave her lemongrass, and Montana, parsley, and Paris, butter, and Italy garlic and sardines, and American tomato chip flavors which they called “catsup chips,” and these were rosy and rich, as you could see in her photographs even after she had become a pomme of a certain age…

Her descendants, for some reason, had sets of triplets who liked to spoon, tummy to back, and could be seen in Central Park dressed in clothes of the fashion house Lay or Utz or Laura Scudder. Even into her eighties, she was all the rage, and often summered on Cape Cod where she attended the Cape Cod Chip family festival. The Miss Chips were not quite as slender as her side of the genetic pool but were friendly and amusing and very well liked.

Her other summer stomping ground, or habitat, was Saratoga Springs, where she was said to have dined with the ghost of one of the Vanderbilts, who seeing that his potato fries were a tad soggy, returned them with a good deal of rancor to the chef who, insulted but restrained, popped some potato shavings into bacon grease and served them up with a flourish.

My, how he raved! 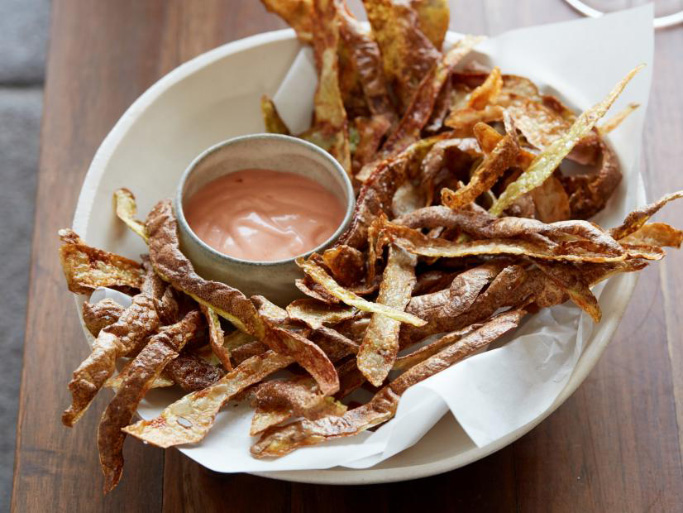 And to think he was sitting across from Ms. Frite, with whom he chatted until closing, while she combed her beautifully-manicured hands through her wavy locks which, to the gentleman, looked as good as railroad stocks, and so they sat, so entranced that Mr. Vanderbilt failed, in a rare breach of etiquette, to invite her to dinner. But neither of them minded, for they were ravished by the sweet emoluments (is that the right word? No? Oh, well) that they dined off these pomme appetizers, and so goes the legend: that they had a brief affair, after which the gentleman reluctantly returned to his wife, who was as chips is to stale bread…

Oh my, what a naughty (mechant) idea, and Ms. Frite went on to other amusements in other salons, where she was plied with morsels of unguents (oh, dear, another word that sounds like snacks), of tasty little bits in bowls, and licked her fingers gleefully, and didn’t mind if she was caught on the social pages of The New York Chimes, with her moistened fingers plying the bowl in publicity photo after publicity photo, smiling with rapture. But perhaps I’ve overstated my case, as I report this with a distracting bowl of shapely Frites at my side. They are intelligent and well-travelled and have all gone to Smith, so there’s no taking them for granted, one can only respect them, for girls in checked wool trousers won’t stand for anything less.