Prentiss Douthit’s book, “An All New Light”, is a coffee table masterpiece offering a glimpse into what life can look like when viewed through the lenses of love and light. Captivating stories accentuated by Douthit’s wit and vulnerability, paired with photos of his stunning paintings and photography inspired by and during his times “away,” make this a book you won’t ever want to end. And it doesn’t have to. Because Douthit’s story isn’t over. And neither is yours or mine. 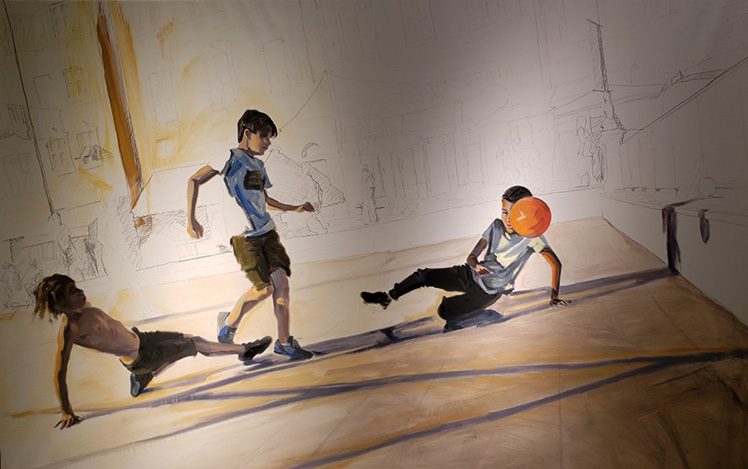 I first met Prentiss Douthit in 2018 when I went to his home studio in South Austin to interview him for ArtProfiler’s Artist Monthly series. It was immediately apparent to me that he is a man who feels joy and selflessly spreads it. We laughed through much of the two-hour shoot, and I probably left with more blooper reel footage than what was actually usable for the article. It was one of the most fun artist interviews I’ve ever done. I learned then that Prentiss studied painting in college but spent the next many years working in graphic design, at one time owning a successful stationary business. Sensing the need for change, he moved from Alabama to Austin in 2012 and landed a job as executive director for the Hill Country Ride for AIDS, an endeavor that found great financial success under his leadership. This year’s ride was the 20th anniversary, and Prentiss’ last in that role, as he had begun, once again, to feel a sort of shifting beneath his feet that would require an entirely new focus… 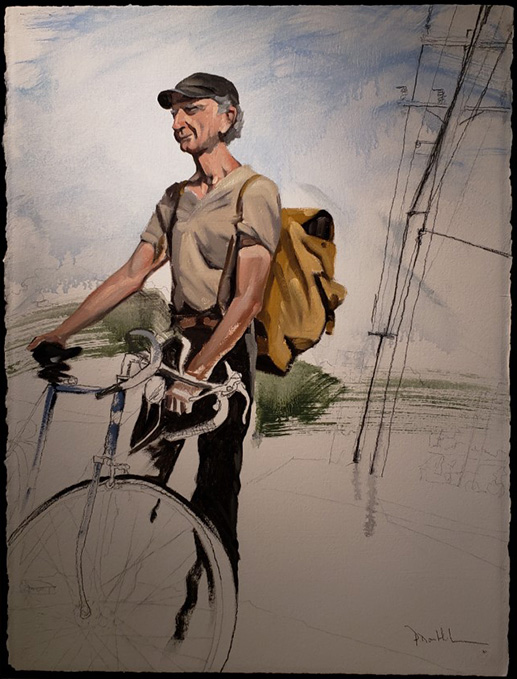 A book. But let me backtrack and tell you what led to Prentiss writing and curating An All New Light. He traveled to places he’d never been before, and he did it alone, really the only way to find the calm of self-reflection and self-guidance. While on this sojourn of solitude, he captured photos on his iPhone – of the architectural landscapes, the quiet places off the beaten track, the people. Some, like him, basking in their own aloneness while others were celebrating life together and even those who were just going about a normal day, sitting along the water’s edge among friends at day’s end in Croatia or walking down the street in Paris because the sidewalk had narrowed. And most of his photographic subjects didn’t know he was taking their photo. That’s the beauty of a smart phone – no fancy photography set up to spoil what’s real. So, in a sly fashion, Prentiss snapped their images into the digital world, and then he came home where he shared them on social media, accompanied by wonderful stories about human connection, adventure and self-realization. And then, after sixteen long years away from his oils and brushes, Prentiss sifted through the thousands of images, chose his favorites and he painted them. 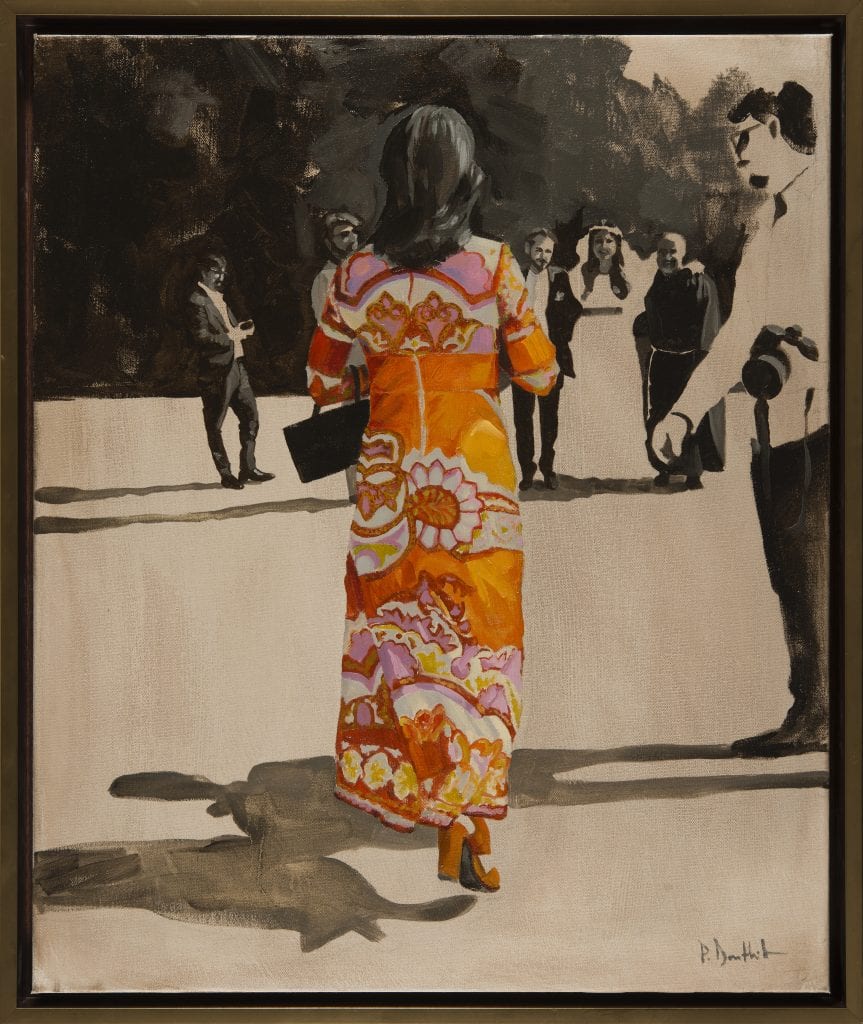 He held his first exhibit in Austin in November of last year, which he then took on the road back to his hometown in Alabama. But if I remember correctly, there were very few paintings left for sale by the time he reached home, as the Austin show was a near sellout. With both this success, and the tremendous support and interest his stories were receiving on social media, he decided to write a book. 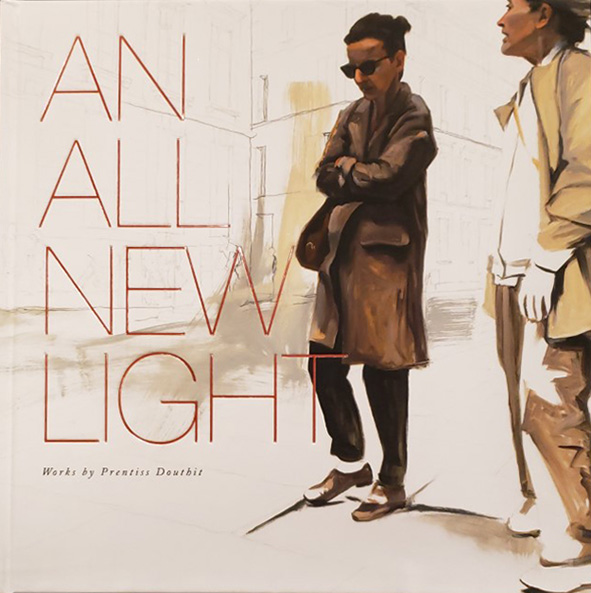 An All New Light Cover

An All New Light’s release party and Prentiss’ exhibit of his 2019 paintings was this past Saturday at Springdale General. I lucked into a parking spot right in front of the long wall of gallery windows and wasn’t all that surprised to see the over-sized exhibit space chock full of patrons. The atmosphere could be felt from the parking lot – music, laughter, chit chat – and with that welcoming ambiance I walked right in and began my first tour around the perimeter of the six-walled gallery. (I ended up doing a full four rounds!) There were 19 paintings in total, all oil on linen or paper.

Many were from Prentiss’ travels this past year. 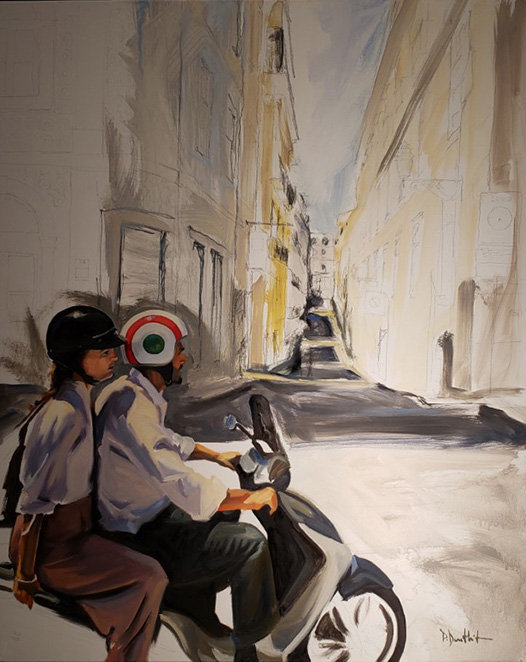 And there was a sprinkling of paintings that were based on dated, found photos. 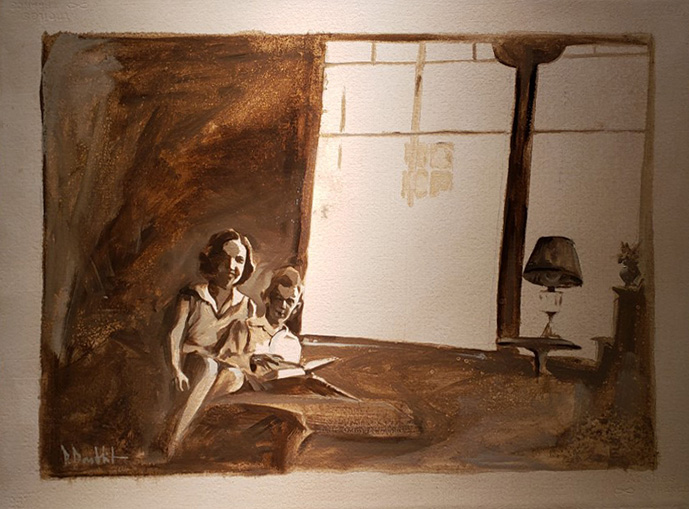 There was also a series of people at Austin bus stops, a series that, according to Prentiss, may expand to bus stops from all over the world one day. 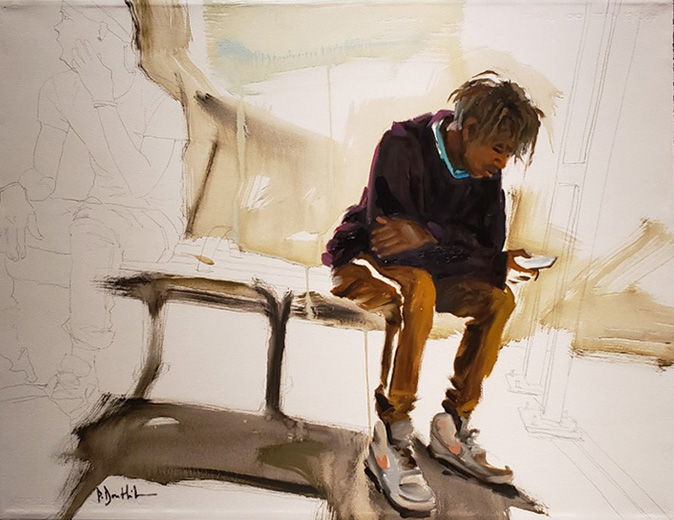 Prentiss’ paintings are a combination of impressionistic brushwork with hints of realism and in many cases, areas left only sketched, leaving the canvas “unfinished.” While his talent for capturing shadows, light, folds in clothing and a person’s expression is readily apparent (no doubt influenced by one of his favorite painters, John Singer Sargent), it’s those sketches he leaves in the background that I find the most fascinating. His work doesn’t allow for just skimming the surface. You stand back at first, take in the whole painting, but then you are drawn in, your body literally propelled forward to within inches of the canvas so you can really dive into the scene to interpret what is going on in the background. And that’s exactly what Prentiss wants you to do. In fact, it’s the reason he doesn’t title his paintings. After perusing the art, I caught up with Prentiss while he was autographing books and asked him about the works’ untitled status and he told me, “So much of what I do is about allowing space for the viewer to bring their story to it, and I think a title is a barrier to that process.” 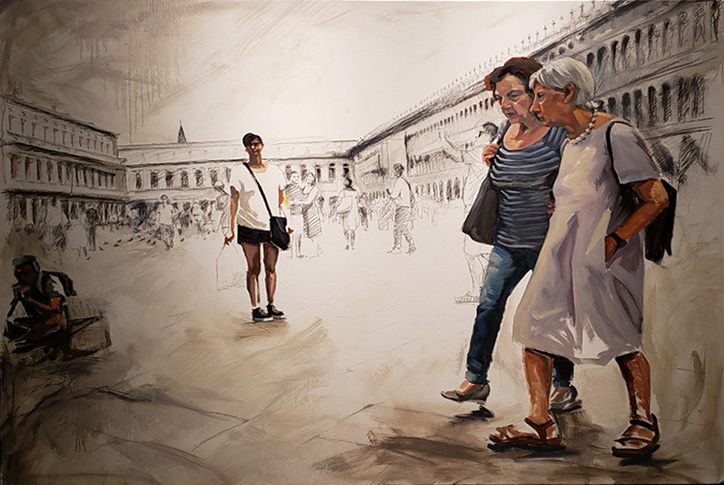 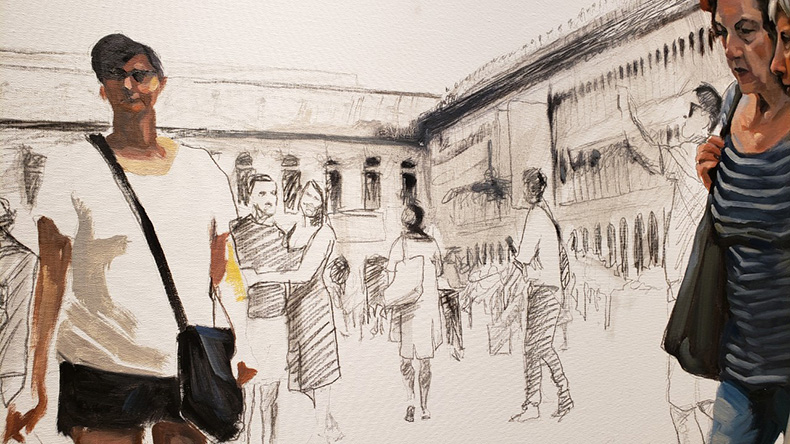 This one was another favorite — we see the woman in the red shirt walking in the sunshine. But look at the facial expression of the woman behind her. What was she thinking?! 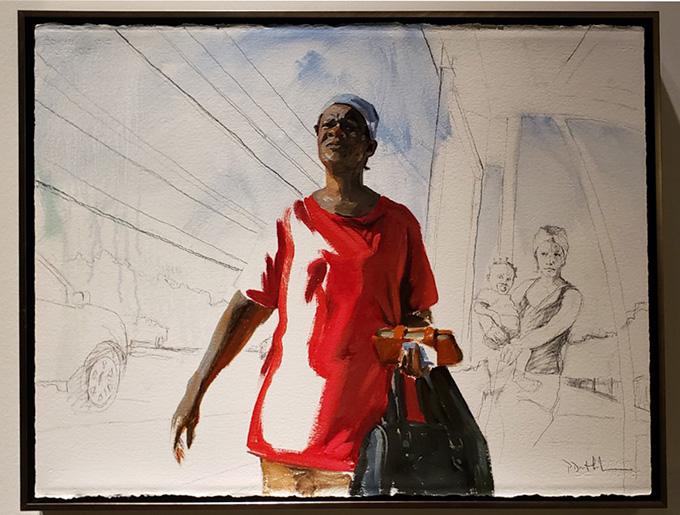 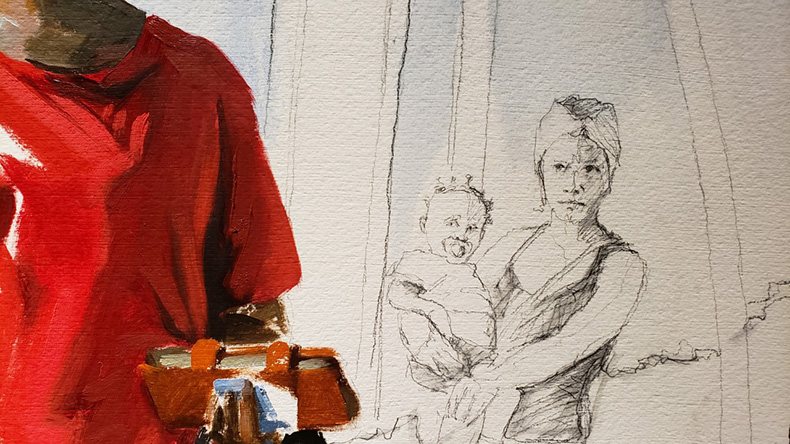 I asked Prentiss what his future plans are, and he said, “I don’t know. I didn’t allow myself to dream another dream until these things were done. I told myself to focus on the paintings and the book, so after I step away from this I’ll be open to another dream, but right now it’s just been the book and this show.” I can’t wait to see what he comes up with next. Because I have to tell you, this book is amazing. It’s a hot-off-the press 11×11 hardcover with 168 pages of his paintings, photography, personal stories and technical notes about his artistic process and vision. The book is dedicated to his mother and he notes, “Having a mother who loves you from a place of joy creates an adult who finds joy in loving.” (So that’s where he learned to selflessly spread joy. Of course.)

You may be thinking, who wants to read a book about someone else’s travels? It is so much more than that. Prentiss takes you right along with him – you feel like you’re in Mexico, Spain, Italy, Croatia, France and Switzerland, seeing with his eyes, breathing the air he breathed, perhaps even fumbling your way through a language barrier to get on the right bus that will take you to the beach. Prentiss’ flair for storytelling is as compelling as his skill with a paintbrush. And the photos he included in the book tell their own stories – the histories of the ancient cities seep out of the old masonry and the cracks in the centuries-old streets. You want to be there and this book, unexpectedly, is your invitation to go. 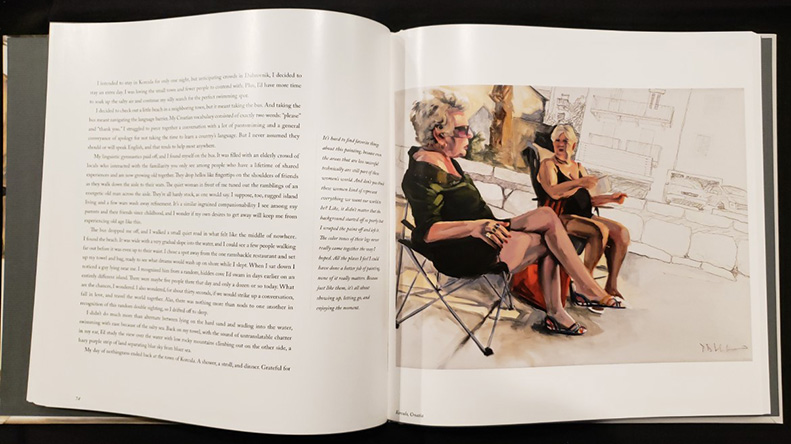 A page in An All New Light

I think the reason Prentiss titled the book An All New Light is because 1) he went through a difficult period in his life in which he felt trapped in a murky gloom – it is the reason he began traveling, and the experience of that dark place is detailed in one of the last stories in the book. And 2) because light plays such a large role in his paintings. For instance, in one work a street vendor and his cart are in shadow, but you can see a tiny bit of his umbrella peeking out from the darkness; or perhaps you might notice the glow of a lantern in a dark alleyway; or even more subtly, the dried out ends of curly hair bouncing in the warm light of the sun. Prentiss is telling us, when you are in darkness, know that there is light everywhere. You just have to be looking for it. 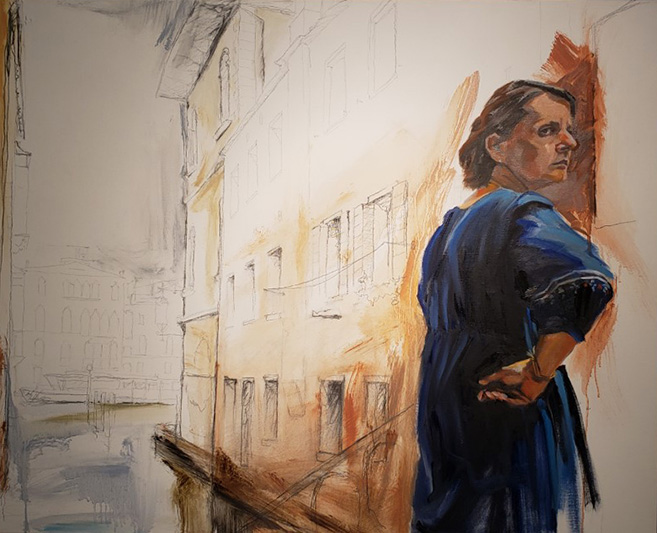 Poetically, the next to last page of photos is Prentiss himself, reflected in windows and mirrors. I find this symbolic because I think Prentiss is light, and when he reflects it onto us, we get to be light, too. And let’s face it, we could all use some light. I’m not going to give away what the last page of the book is about, but I’ll give you a hint. It ends how it began.

An All New Light is available for purchase here. 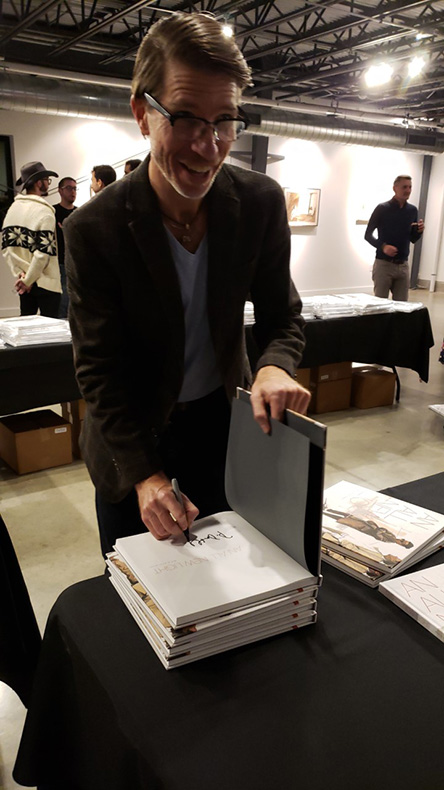