The Dance Salon: Solo Show at First Street Studio in Austin was the finale of dance company Ready/Set/Go!’s 2018-2019 season. It was also one of Austin’s most important, inspiring and downright beautiful dance shows this year. The format of the show was solo dances created by the performers themselves. They were limited to between four and six minutes in length and the material came out of the choreographers’ own introspection. Naturally, experienced choreographers answered the call, and the results were founded in modern dance and ballet technique. It is interesting to note that the choreographic bases of the choreographers’ inspirations flowed down similar channels. Four of the soloists began their pieces in floor work, and one dancer, Ellen Bartel, remained in performance on the floor effectively throughout her piece. Further, the basics of theme and variation were followed by many of the performers, who established movement and energetic themes and then explored many styles of variation on those themes. 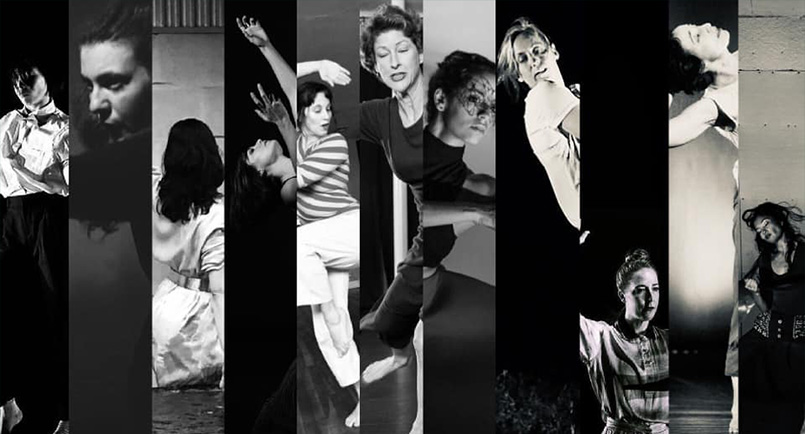 Lisa Nicks gave the show a strong start. She entered walking, through pantomime creating an imaginary street scene. Then, in imaginary shop windows she seemed to see beside her own reflected image the faces of three people previously in her life. These memories structured the remainder of the dance. Nicks fashioned homages to the three people, unnamed throughout, in powerful, sweeping passages of modern technique, finding new ways to rise from the floor and descend to it. An air of wistfulness and sorrow persisted through the dance. The title of the piece, “Will I Ever See Them Again,” without a question mark, made clear the introspective basis of the solo.

Erin Delperdang explored her own deep imagery, possibly dreams, in her piece, “A Silver Lucifer, Part 1.” It was a two-parter, with “Part 2” in the second half of the show. In darkness, Delperdang rose from the floor with a mysterious light shining from behind her back. It was a silver-bluish ball glowing and emitting light. When the lights came up, Delperdang’s costume was seen to be a flowing, floor length kimono-style robe of a silvery-coppery, almost iridescent fabric. Her athletic dance, incorporating much floor work, seemed to address the ball that she held in her hand or kept nearby the whole time. And then! In “Part 2,” she entered with the ball, but she was wearing a red patterned jumpsuit over the kimono costume. The exact meanings and purposes of her dance remained delightfully opaque, and her imagery was memorable. 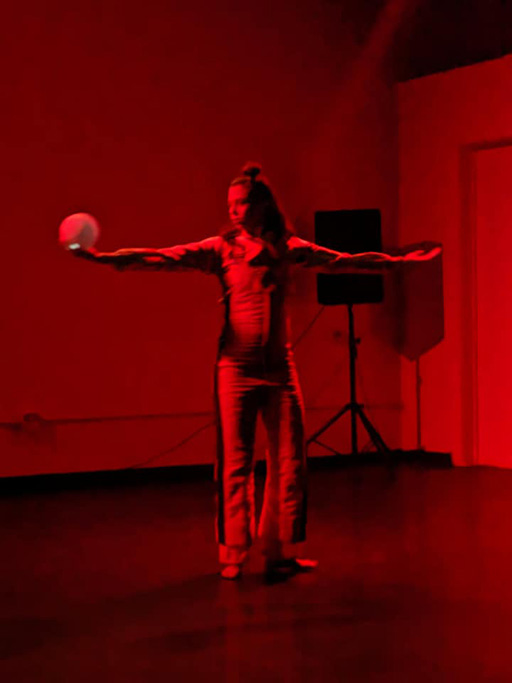 Alyson Dolan explored a recurrent theme in her career, entitled “Giving Myself Permission.” The variation here is her pregnancy in her ninth month, which doesn’t seem to have slowed her down. She entered performing an introductory crouching step with hand gestures, one she’d done many times before. Her costume fully exposed her large, rounded abdomen, and her movements grew more expansive and soulful. Late in the piece, the sound track shifted to beach and wave sounds and rhythms. I had by then already mentally renamed her piece “The Ocean Within.” Her pregnant dance continues a long-term trend of pregnant dances in Austin, beginning, in my memory, with Diana Prechter’s dance at eight months at Capital City Playhouse in the early 1980s. May the trend continue.

Sharon Marroquin seemed to take a new turn in her career. The voiceover of her piece was a reading of a poem by Afghan poet Khaled Hosseini. The story poem was wide-ranging, largely about victims of war. Remember the photo of the lifeless infant boy on the beach? While Marroquin danced, she made many hand gestures that seemed to have meaning. This became clear as it was apparent that they corresponded to the phrases on the soundtrack poem. Marroquin was teaching us her own invented sign language! Late in the piece she dropped Sharon Sign Language (SSL) as a series of rebus-like hand gestures and seemed instead to incorporate the gestures and their meanings into her body. She moved slowly in floorwork across the floor, rolling over three times, finally coming to rest and seeming to melt into the marley floor surface, as into the sand on a beach. 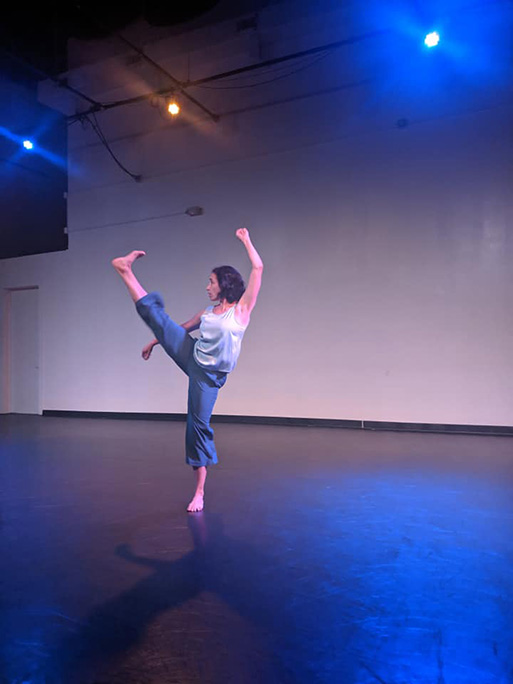 As mentioned, Ellen Bartel performed completely on the floor, wearing comfortable casual clothes. Some of her movements were as though she were lying in bed. Many of the movements that changed her position or some aspect of orientation clearly came from her considerable core strength. Making such changes without the support of arms and legs amounted to a series of impressive yet subtle feats, all of them in service to her artistic expression. 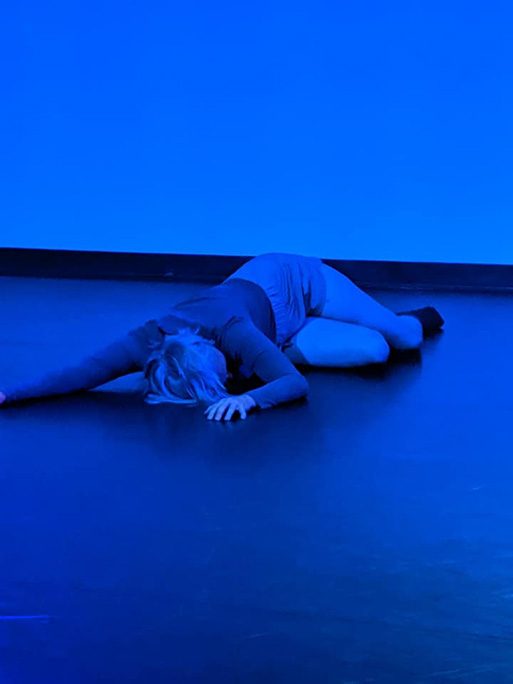 Alexa Capareda is known for a strong, wry sense of humor. Her piece, “Party Trick,” showed that trait in full as she danced highly skilled ballet phrases in sync with Camille Saint-Saëns’ Danse Macabre. Capareda slapped the macabre on the dance with facial expressions and grotesque hand and body gestures. In all of it she maintained strict ballet discipline, as when she stuck the final landing downstage, keeping an impassive face while the audience cheered. 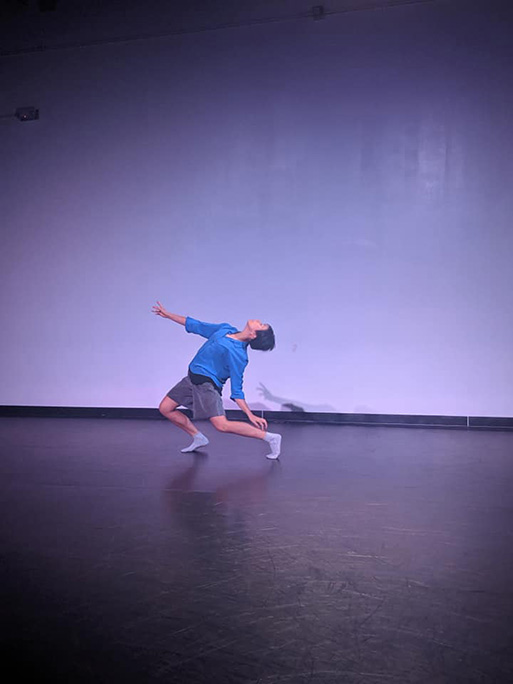 Lauren Tietz is a recognized master of the field of authentic movement. Her choreographed solo was a showcase of her own authentic movement and composed of a series of circles from which Tietz launched and explored a further series of spirals, in each series finding new ways to turn, sweep, and change. Her flowing garments and long, thick hair assisted her spiraling motions. Tietz seemed to form fractals out of her human movement.

Mysti Jace Pride showed growth in modern technique and perhaps the most thorough development of the theme and variation approach to choreography in the show. Her extensions and use of the space were impressive. She danced to a live accompaniment by flautist Meg Griffith.

Yvonne Keyrouz shares the prize for intriguing imagery with Erin Delperdang. Her piece “Keen” began with her standing in scarecrow position with upper arms out horizontally as far as her elbows with her forearms hanging vertically downward, hands and fingers limp. Her head was bent and her thick head of hair covered her face like a treetop. Then her hands and fingers began shaking like leaves. The soundtrack made the sound of something dropping, thud, and Keyrouz broke out of the shape and movement to pick up an imaginary object. This sequence of events happened again, then Keyrouz moved on to the main body of the piece in a combination of modern technique, pedestrian movement, and narrative shapes. The piece offered surprise after surprise, including a moment when her thick hair fell strategically apart just enough to reveal one expressive eye staring fearfully off to one side. Her piece-ending exit from the stage was similarly unusual and unexpected. 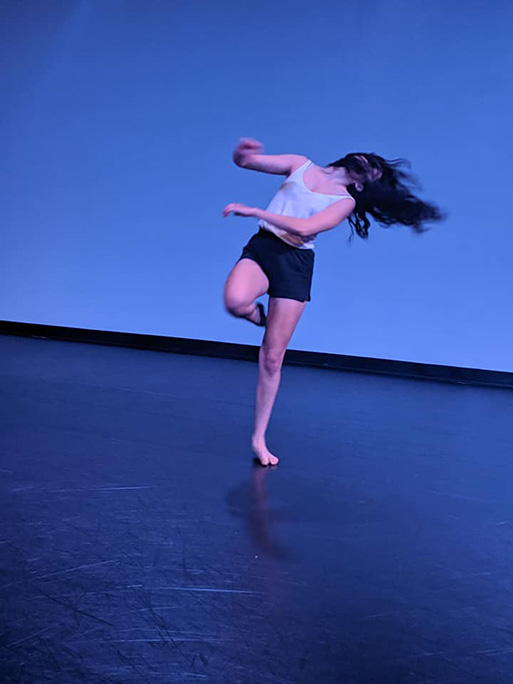 Taryn Lavery danced memories of one or more romantic beginnings. She focused seemingly on those initial moments of discovery of the significant other. This scenario was signaled by her piece’s title, “Suddenly [something]” and the intriguing program note: “Future as a past memory. Déjà vu meets clairvoyance. Sort of.” The movement was also a well-executed combination of modern technique and narrative imagery.

Lisa del Rosario ended the show with her high-energy performance to a popular 80s song. Her expert technique filled the space multiple times, as did her wide-ranging emotionality. Although some of her expressed feelings seemed to refer to loss and separation, the piece as a whole gave us an upbeat ending to a marvelous dance concert. 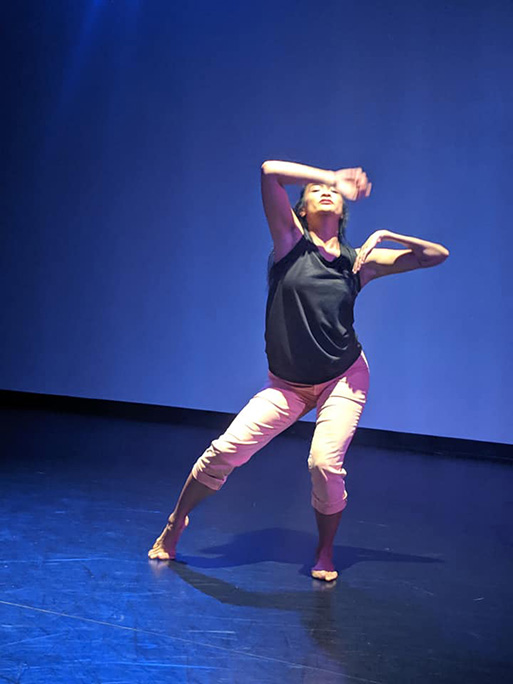