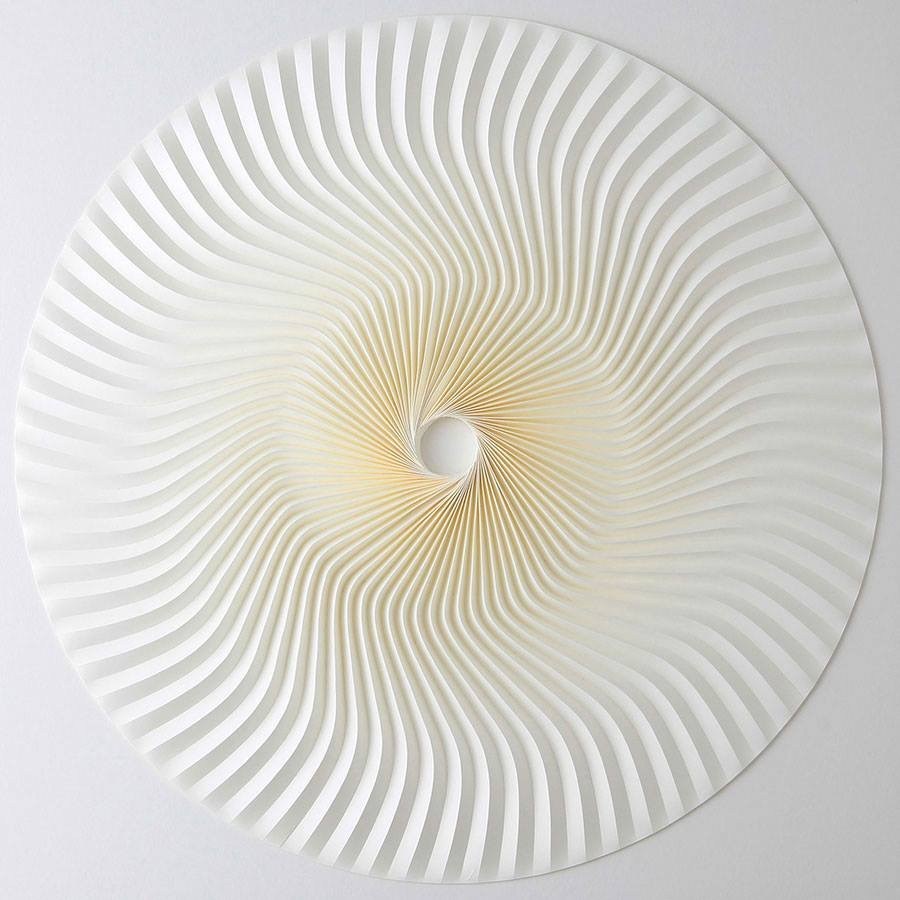 Dance Salon 2: In the Round (February 8 & 9 at First Street Studio)

Ready/Set/Go! is the dance collective of Katherine Hodges, Emily Rushing and Rosalyn Nasky, who are the producers of this innovative group dance show. Dance Salon 2: In the Round is the second in a planned series of three such group shows for the 2018-2019 season. Drawing on Austin-based talent, the collective offered a diverse, highly skilled and aesthetically pleasing show.

“Mare’s Nest” was the strong lead-off performance, choreographed and performed by Emily Rushing and Carissa Fisher with lighting design by Cody Rushing. The first innovative element was the lighting itself, a circle of lighting elements on the floor, shining upward. The dancers wore contrasting light and dark costumes, Fisher entering the dance space first. Moving with her characteristic athleticism and level-changing sequences, Fisher remained within and on the peripheries of the column of light. Rushing remained outside the circle but maintained a keen focus on Fisher; and it was clearly a focus of antagonistic aspect. Rushing created a pace of rising and falling movements and phrases and almost frenetic dynamics. The dance may have been aptly renamed “Photons at War.”

“Walking Fast with David Byrne: A Structured Improvisation.” This was exactly that, a structured improvisation for fourteen dancers directed by Ellen Bartel. The large mass of movers filled the space with knowing moves and fluctuating emotionality, some of it quite humorous. The piece, with Bartel’s signature line-ups and unusual breakouts, was reminiscent of 90s improvisation in Austin.

“H. Exotic: Chinita Banana” was a solo by Erica Saucedo, and it provided great contrast with the previous group piece. Saucedo wore a floor length floral print very much like a traditional flamenco dance dress and carried a basket of fruit. Her movement, however, was extended space-filling contemporary dance technique. This was punctuated with passages of acting and pedestrian behavior much like performance art. Saucedo stayed strictly on theme, however, addressing the prejudicial treatment of immigrants by wealthy citizens. “H. exotic” refers to “house exotic,” a pejorative term for servants hired and kept for the exotic appeal of people bearing their home culture within themselves and suffering the condescension and mockery of their employers for it. Saucedo is an Austin native but a new and rising star on the dance scene.

“Foreign Lover” was a duet by Shen Jun (Sunny) and Rachael Hanlon. The piece was well performed and highly sensual as are most duets. The theme of contesting for control in relationships was brought forward to a kind of fetishistic conclusion, one of almost arachnid predation. The piece was a feature piece also of the Shen Jun Movement Effect: A Forbidden Chapter, reviewed below.

“Oriface” was the show contribution of the Frank Wo/Men Collective, the thoroughly auspicious new ensemble of Alexa Capareda, Kelsey Oliver and Erica Saucedo. Their piece heightened the athletic impression of the entire show with strong and gymnastic and definitely orthopedically risky passages. Leaps and lifts were interspersed with periods of stillness on the floor which, because of their context and the bizarre leathery costumes and masks, evoked impressions of all manner of kink.

“It’s Not a Word” provided some of the strongest contrasts in an entire show of such. John Carr Gable held a huge skein of jute or some other rough fiber. Amy Myers took one end of it and silently formed a loose weaving knot progressively in the fiber while stepping quietly across the floor. She left a huge, loose oval strand of woven material on the floor, of which Carl G. Jung would have been proud. That was the entire piece. The dance was clearly a meditation and one into which, by its quietness and hypnotic movement, the audience was generously invited.

“Giving Ourselves Permission: A Study” ended the show. Choreographed by Alyson Dolan, it featured dancers Dolan, Jessica Boone, and Lisa del Rosario. The piece was part of a long-term study in authenticity, a leitmotif of Dolan’s choreography. Permission in this piece included discordant vocalizations, simple relaxing on the floor, and self-reflective spoken passages of impressions of the moment, how the dance was progressing, etc. The movement and stillness were against a background percussive soundscape by Drew Silverman. Although this structure seemed highly improvisational and almost casual, the audience found the piece a satisfying work of contemporary dance. Dolan is encouraged to continue exploration of this region of performance.

Dance Salon 2: In the Round was an impressive showcase of new Austin dance talent. The audience is looking forward to the next show by Ready/Set/Go!, Concatenation, on April 11, 12, 13 at Ground Floor Theatre in East Austin. 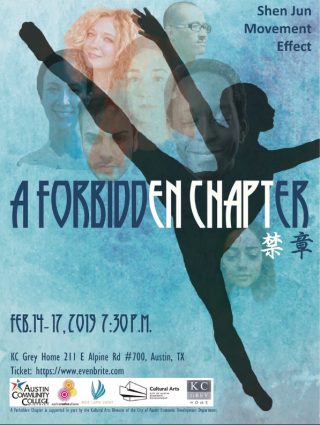 The Shen Jun Movement Effect is the new dance company of Shen Jun, known to all as Sunny. He has an impressive background in dance in Asia and North America, and now he is venturing into professional company work. His plans are to open a companion company in China, operating and building an intercontinental dance concern. A Forbidden Chapter is an auspicious showcase of his aesthetic and the talent he has drawn to his company.

A Forbidden Chapter was a single, long dance of about 50 minutes duration, not divided into individual titled dances, although the show had clear sections set off from each other by diverse musical sections. The duet mentioned above in the Ready/Set/Go! show, “Foreign Lover,” was performed within one of these sections, with entrances and exits made subtly and overlapping with other passages. The smooth flow of the show granted by the thoughtful treatment of these fundamentals was a virtue of the show as a whole. Assisting with these basics were a large sectional couch at one end of the marley playing floor and a king-sized bed at the other, with spreads, coverlets, pillows and throws all around it. Between their movement passages on the floor, the cast perched on the bed or couch, affecting meta-characters one might imagine as housemates in a shared domicile. The brightly lit stage seemed to be the dream theatre where their dreams and memories played out as 3-D holograms of their experiences.

The dancers gave us memorable images in this performance realm. Toward the end of one section, the entire ensemble descended slowly to the floor, spread-eagled. They shook convulsively for several seconds, limbs, heads and bodies quaking, their eyes staring upward. Whether they were portraying fear, extreme cold, ecstasy or Chtulhu-possession was left to the viewers to decide. Other images were created verbally, while a performer was dancing solo. Most of these seemed like spoken diary passages about lovers, the other-lover. That of Hailey Lauren, who doubles professionally as an actor, was especially memorable. The contributions of great intimacy by all the performers were laudable.

Intimacy and sensuality were themes of the show, drawing on the experiences of the dancers. The spectacular show was, as the program notes stated: “exploring how people pursue intimacy and variations thereof… Performers pulled from their own experiences of love intimacy and used movement and speech to deconstruct, reflect, interpret and share their understandings on stage.” The bold and impressive cast in addition to Sunny was comprised of Hailey Lauren, Clay Moore, Rachael Hanlon, Francis Rodriquez (female despite the spelling), Lisa Kobdish and Jack Anthony Dunlap.

A Forbidden Chapter is an impressive show that could be enjoyed in further performances. Shen Jun is a major new choreographer with a bright and creative future.