We’re going into seven months of this coronavirus lockdown/shutdown masked imprisonment. We have seen theatres, other venues, restaurants and bars closed permanently, The North Door being the most recent casualty of the viral siege. We have received and observed many online streaming performances of archival recordings of plays and dance performances and cleverly recorded Zoom meetings with characters interacting in various ways. All these efforts by Austin artists are laudable, but few are completely satisfying.

Andrea Ariel entered the plague time of Covid-19 working on a show contracted with the Long Center for a premiere in April, 2020. She had been working and fundraising for it from fall, 2019. Just before the Covid-19 shutdown hit, she decided on the title, Reimagine, because she had been reflecting on 30 years of her work, culminating in 2020, and she wanted to create a performance acknowledging that which had come before and had built her career. And then the shutdown changed much for now and the foreseeable future, primarily the staging and presentation of live shows. Undaunted, Ariel, with the full cooperation of the Long Center, restaged Reimagine as a production for streaming, with such innovations as home Zoom video performances shot in lockdown and rehearsal videos shot before the lockdown with its masking protocols. Archival videos were also used. From this mass of imagery and music by composer and long-time collaborator Graham Reynolds, the show Reimagine was created with the immense work of videographer Colin Lowry. Of greater importance, as of this writing, Andrea Ariel, her family, and all members of her company and collaborators have remained in good health and great positive outlook throughout the pandemic. 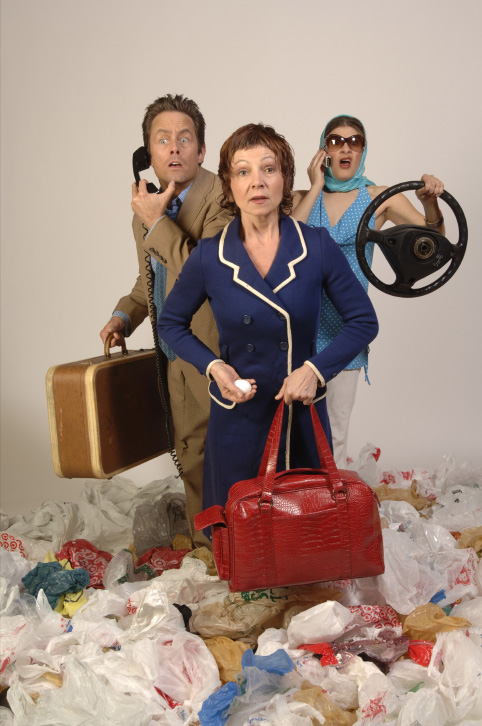 From this, one sees easily that, despite the title, Reimagine is a new creation by Andrea Ariel Dance Theatre (AADT), celebrating 30 years of Ariel’s dance work in Austin. The Covid-19 pandemic could not stop this collection of artists, only give them new program instructions on how to create new and reimagined work. Subtitles are so important in setting up expectations, and for this show the subtitle is “a virtual recreation of selected works from AADT’s postponed show REIMAGINE celebrating 30 years in Austin, TX.”

The structure of the show is a progression of dance pieces like any dance concert. The pieces, instead of being performed live for broadcast, are presented streaming from the Long Center website. As such, the videography and editing work to produce the show was massive, and great credit is due Colin Lowry for bringing it all into coherence and seamless presentation. Composer Graham Reynolds adapted new and earlier music composed for AADT shows. He has worked with AADT for well over twenty years.

The true showcase of the show is “Broken Head,” premiered ca. 1990 as a solo by Andrea Ariel and performed several times at Capital City Playhouse and Dance Umbrella’s Synergy Studio, both downtown venues of fond memory to everyone passionate about live performance. In “Broken Head,” Ariel displayed and employed the iron muscular midriff mandatory in all 90s choreographers, with which she created an athletic, virtuoso solo that remains fresh and challenging today. Follow-on rehearsal footage shows today’s company turning “Broken Head” into an ensemble piece, again choreography fresh and innovative after 30 years. 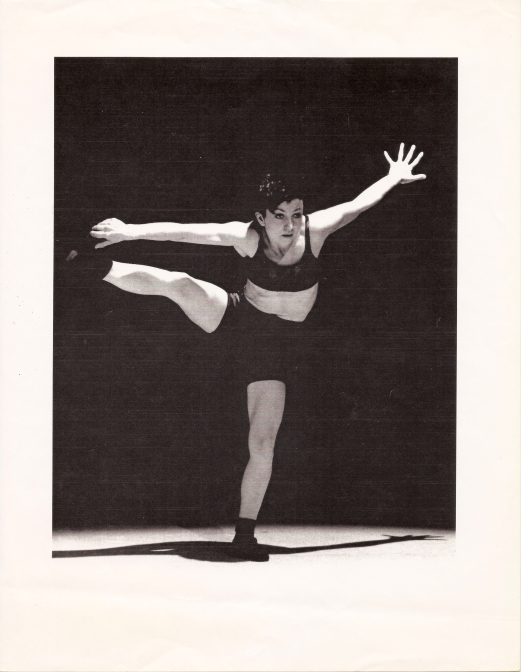 “Life’s a Circus 1996” is another archival treasure, originating as an ensemble piece in Proto, a show in the former Nalle Plastics building downtown. Reimagine shows the archival footage of the original piece in bright costumes, and then an initial rehearsal video for the current show in studio wear in a small rehearsal hall. For anyone who thinks modern stage dance is easy or a snap, it may be enlightening to watch the rehearsal footage with bodies straining, abundant oofs and oops, and commentary in progress. The physical and mental commitment of this company is unquestionable.

“Home 2020” explores isolation through an extended Zoom meeting. The performances start with common, everyday phrases, sometimes in unison. The performances build and expand to confirm and affirm new networks of connection. With those networks, we gain and keep inspiration. Reynold’s music shows restraint and follows the dance rather than leading it. The chat room beside the video and audio ran with comments such as “captivating” and “a true reflection of 2020.” 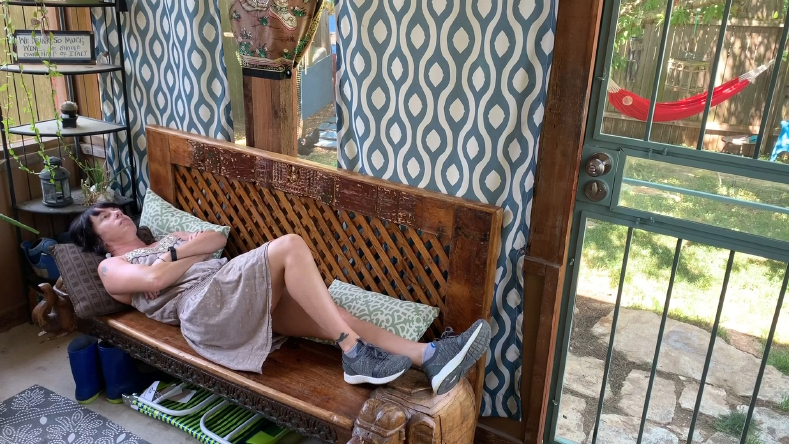 “Crossings, 2020” is the longish closing piece of the show. Beginning with individual dancers in shutdown, the opening minutes are accompanied by rather heavy, portentous music from Reynolds, originally composed for AADT’s Geometry of Proximity in 2012. He also applied much of the music in that show to additional pieces in Reimagine, thus giving us another level of reimagination of art that comes forward from the past in newness. Eventually, the dancers in “Crossings 2020” broke their confinement, and the remaining video gave us whimsical images of the dancers outside and on the streets, socially distanced of course, most charmingly with their dogs at play and in enjoyment of life. Here, too, was more of the virtuosic videographic work of Colin Lowry.

As reimagination, the show Reimagine truly re-envisions performances and artists over the last 30 years of Andrea Ariel’s career. Books could be written about that career, but a brief, magazine-style article, well-illustrated, surveying the career of AADT, can be read here. Uncowed by plagues, the company would still like to give a live stage presentation of Reimagine at the Long Center at some time in the future. But only if the uncertainties of modern life allow, of course. The streaming show of Reimagine is still up and available for viewing on the Long Center’s Facebook page. 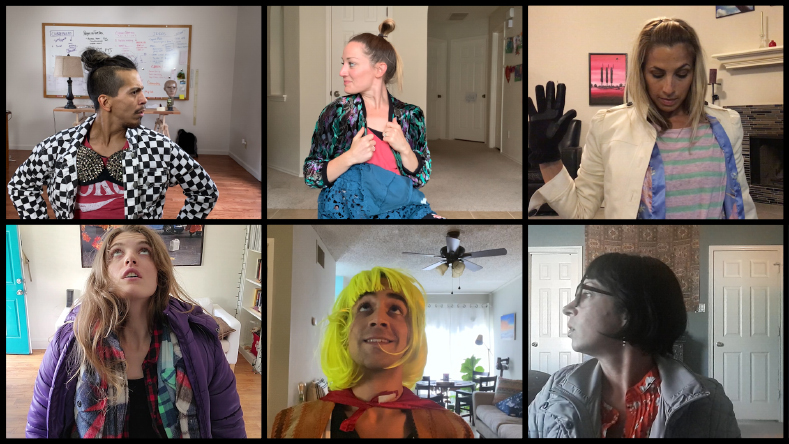 The company is planning a Sunday matinee screening with live chat on You Tube Premiere soon. Donations welcomed HERE. 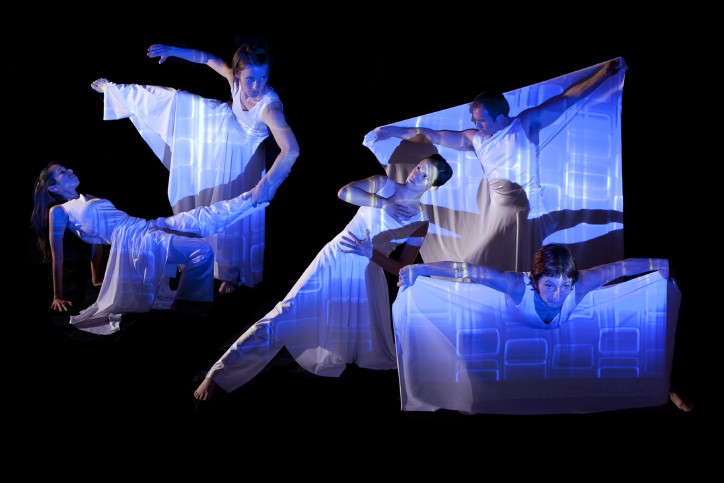