In Memory of Ruth Bader Ginsburg

Even though she was eighty-seven years old and had been fighting cancer for a long time, it was extremely shocking to me — and I think to all of us — to hear that Ruth Bader Ginsburg died today from complications of her illness. I had expected her to go on forever, one of those larger than life figures who, despite her diminutive size, was a force in American life and jurisprudence.

She was definitely a hero to women and to all those on the progressive side of politics. Nominated to the Supreme Court by Bill Clinton in 1993, she was known for her achievements in the area of gender equality and equal pay for women, as well as being a co-founder of the Women’s Rights Project at the ACLU. Women of all ages loved and adored her. She was our hope for the future and we all prayed that she would go on well into her nineties because she was so extraordinary, especially in a bleak time such as ours.

Since the news of her death broke, I’ve received dozens and dozens of texts from friends and family members, all in tears and grief-struck because she was our inspiration; she was the person whom we felt protected us and would get us through. To all of us, this is a very personal loss.

I feel honored to have painted her. While I stood in front of her image at the easel, trying to capture her startling eyes and powerful face, it was as if she was actually there and I could feel the strength of her intellect quietly sizing me up and wondering if I could do the job. I’m glad I had the chance and that, in painting her, I got to know her a little. 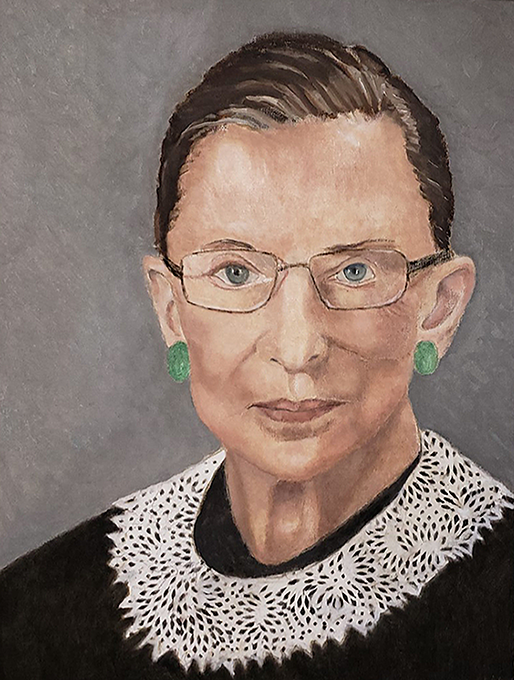 Rest in Power, you amazing woman.