On Friday, February 2, I had the pleasure of attending the 15th Anniversary celebration for Annie’s List at the Long Center which featured Senator Elizabeth Warren as keynote speaker. At the wall of windows on the City Terrace, I took note of the full lobby of mostly women as our bags were checked and we were scanned by security before entry. The air was crisp and the energy much the same, every person there was anticipating a Warren who’d inspire. Her appearance gathered a larger than life crowd who was ready to laugh, shout and propel our man-led government forward… by electing women.

Annie’s List works to achieve equality for women by changing the face of power in Texas. They recruit, train and help elect progressive women to office in Texas. The organization has raised more than $15 million to support their mission and has won more than 100 races across the state.

Annie’s List Board Chair, Heidi Gerbracht, opened the show by thanking executive director, Patsy Wood Martin, and encouraging the audience to donate to the organization by texting to a specified number during the course of the event. 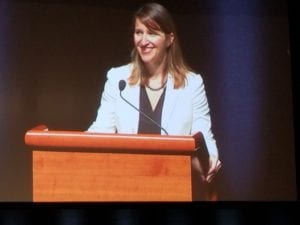 Texas State Representative Diana Arevalo took the stage and told us that men hold over 80 percent of the seats in the Texas legislature. She reiterated that it is time for women to lead without all the conflict and dysfunction we are seeing now. Annie’s List was Ms. Arevalo’s biggest financial backer. 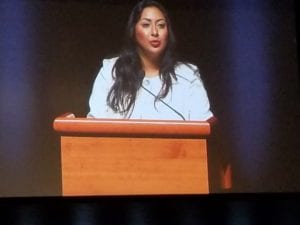 Ms. Martin, a well-known and successful fundraiser in Austin, reminded us of the policies that have been put in place that negatively impact CHIP, family planning and education. She pointed out that Texas has the highest mortality rate in the United States, and is among the highest in the developed world, stressing that this reflects a lack of priority in our government. “Electing women causes immediate benefits; un-electing women causes immediate losses… This is our moment. It is our time to win. For the sake of ourselves, our daughters and granddaughters – it is our responsibility,” she said. 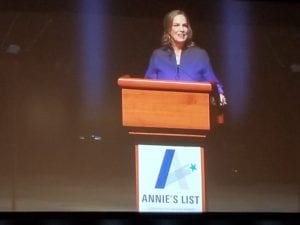 Senator Warren was on point, as usual. She entered from stage left to a standing ovation, the energy in the theater truly palpable. During her thirty-minute speech, Ms. Warren shared personal stories about her home life, the challenges of attending law school while also being a mom (the biggest of which was finding decent, affordable childcare), her struggles during the times she thought she should just throw it all away and quit. Nevertheless, she persisted.

Always the animated speaker – with logic, common sense and even humor running through her veins, Senator Warren helped Annie’s List raise over $66,000 during the one hour event. The organization’s goal was $65,000. 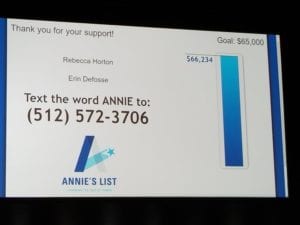 (View the video above for highlights from the celebration.)