Prentiss Douthit is our selected artist for September! ArtProfiler’s Artist Monthly highlights one artist per month for exceptional work in his or her chosen medium.

Prentiss Douthit lives, paints, laughs, and writes little stories in a sweet old house in Austin, Texas. He was born and raised in Decatur, Alabama, and earned a BFA in graphic design and painting from the University of Montevallo, a small liberal arts college in the literal center of the state of Alabama. After graduating, Prentiss worked in graphic design for the next twenty years running his own design and advertising business along with a successful line of custom invitations and announcements. There was a short time at the beginning of his design career when, after a bout of burnout, he toyed with painting portraits as an alternate path. He pursued this for a year or two but decided against it and put his brushes away for the next eighteen years.

Prentiss left graphic design and the beautiful state of Alabama in 2012 for Austin, Texas. He found himself welcomed in the arms of a giving, generous community, and so began his time as the Executive Director for the Hill Country Ride for AIDS, the largest AIDS fundraiser in Central Texas.

In 2017 Prentiss dove back into creative waters to produce a series of paintings for a near sellout show at the Lewis Carnegie Gallery in East Austin. 2018 finds him delving deeper into his creative ambitions while preparing for another one-person show in Birmingham, Alabama, scheduled for November 3, 2018.

Artist Statement
I crossed a very wide boulevard and took a turn towards the bridge over the river. There was a bus stop ahead, and I hoped to catch some shots of people waiting. A block before I got there, I saw an old man moping along. The light was nice, and he seemed to have a story to tell. There was a weight about him. Something he carried on his shoulders and just above his eyes nestled in the bushy eyebrows. The burden caused him to droop. His walk was somewhat elegant, but it plodded as if there was a very long, very heavy bag of rocks dragging behind him.

He was crossing a side street towards me while a big truck was turning left onto the street behind him. I anticipated the large plain white side of the truck making a perfect backdrop while blocking the visual noise of the street behind him if I could time my shot just right. I took three photos without slowing my own stride. 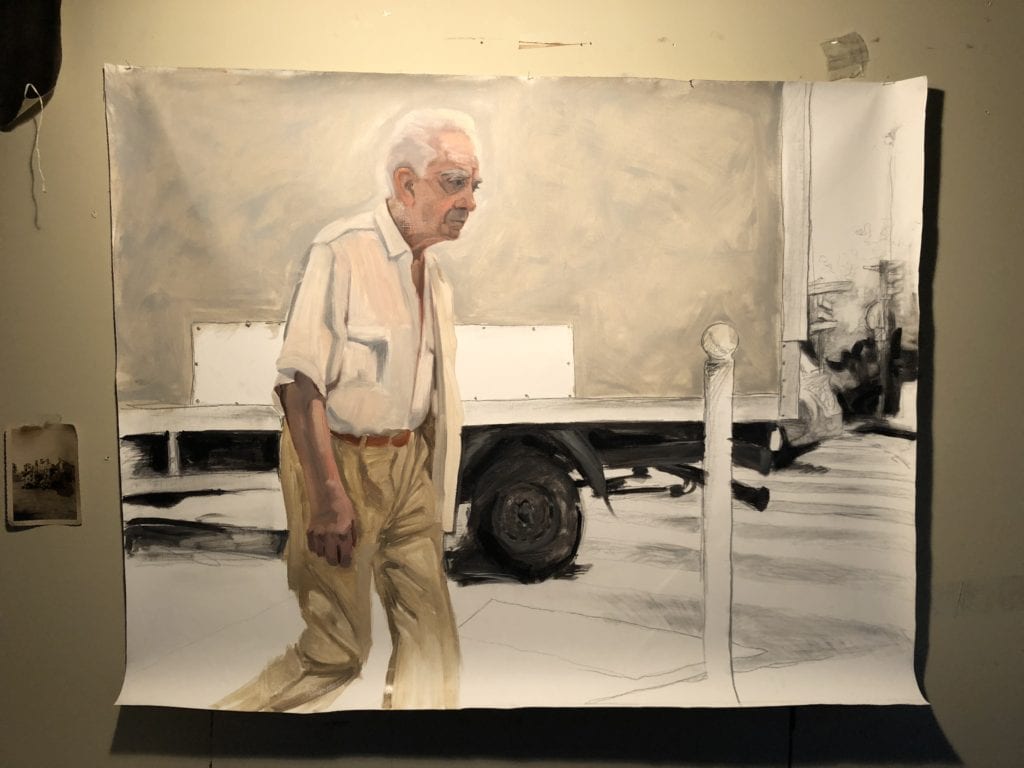 When I looked at my photos at the end of the day — not too many comparatively, as it was mostly a train travel day — I found the old man had landed square in front of the white backdrop of the truck. I loved his intensity along with his droopy spirit. I loved the framed image with the hint of cityscape peeking around the corner. Other cars, a group of people waiting at the stoplight, the striped white lines painted on the pavement. All this noise stirred outside the man’s frame, but the old man’s face was isolated and celebrated.

This is something I try to do with all of my paintings. Isolate and celebrate these people. These moments. There are unlimited moments that happen in our presence at any given time. There are people grieving, rejoicing, walking towards a breakup, or just breathing onto the screen of their phone. There are people steps away from us sitting at a table in their dark house, yet we’ll never know if the space around them is charged with bitterness or exhaustion. Couples holding hands as they walk down the middle of the street. Old ladies who sit in lawn chairs next to a harbor at sunset. 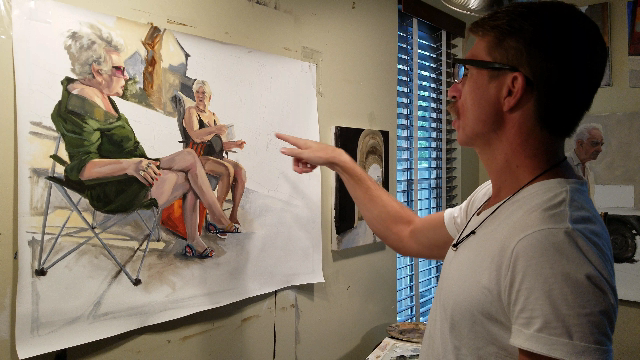 I hope my paintings act as a reminder that the person we pass on the street or the woman sitting in the cafe all carry a direct link to you, the viewer. We are connected in the most primal, graceful, spectacular ways.

There is a core space within each of us from which we all come. It’s a space that holds the answer to every question, the purpose for our journey and the link to every other being. I haven’t yet figured out if recognizing this in ourselves opens the door to seeing it in others, or, conversely, if opening our eyes to this place in others allows us the opportunity to embrace it in ourselves.

Either way, there is light and love to be discovered. In others and in ourselves… they’re the same, really. By taking the time to see ordinary moments, capture them in a compelling way, and ultimately celebrate them, I hope to train the eyes of others to do the same.

Go for that walk. Shop for your groceries. Stand in the space surrounded by conflict. But take a moment to remember this shared space. Whether you see it in yourself or in those around you, find this space and make it your home.