Exactly one year after a record breaking protest in the United States (the Women’s March of 2017), 10,000 people from all walks of life gathered at Austin’s City Hall for an impeachment rally. The most exciting thing to happen during the rally was when activist photographer Alexei Wood grabbed a Trump supporter’s MAGA hat and took off with it. (Full story here.)

The protest didn’t end there. The Texas Handmaids led the second annual Women’s March from City Hall, down Congress Avenue and straight into the Texas Capitol grounds to begin the Roe v, Wade Rally. By the time I got to the Capitol, Texas State Representative Donna Howard was mid-speech, but the crowd was so packed I couldn’t get close enough to the Capitol steps to hear what she was saying.

Saturday’s protests were peaceful. The Austin Police Department was visible in every direction, and if there were any anti-protesters (besides the MAGA hat guy), I didn’t see them. They were drowned out by the good vibes and calls to action to resist this monstrosity of an administration. It was encouraging to see so many kids, female and male, participating. Way to go, moms and dads! Teach them young. 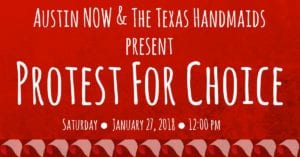 The next Texas Handmaids event is next weekend: Protest for Choice on January 27 at 12pm at the Texas State Capitol. For more information visit the Facebook event page. You could even robe up as a handmaid yourself!

Are you registered to vote, Texans? The 2018 mid-term elections are right around the corner and we need your voice! Visit https://www.votetexas.gov/register-to-vote/ and help us take back this country!