Hey, the Emperor Has No Clothes!

When the Emperor walks naked, isn’t it time for someone to say, “HEY, THE EMPEROR HAS NO CLOTHES?” 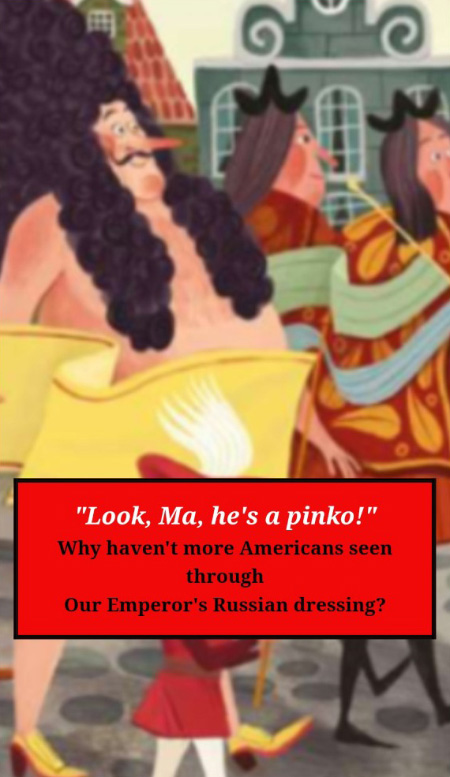 With apologies to Hans Christian Andersen

Who’s going to tell Our Lord
his Russian russe has come undone?

Because it’s now plain for all to see 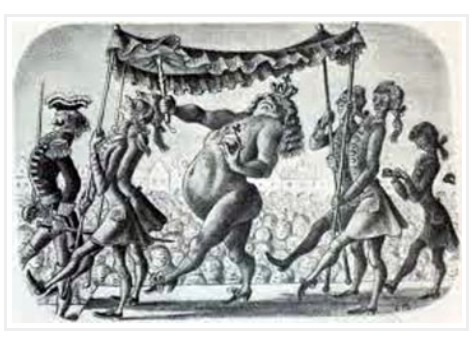 Hiding nothing,
naked in their compli-ci-tee!

No one in the media or Democratic party will dare say it out loud, largely because Robert Mueller couldn’t prove it beyond a reasonable doubt.

But events since the Mueller Report was issued, a number of them over the past several weeks, provide enough new circumstantial evidence for any reasonable person to conclude that Donald Trump is far more than an unwitting beneficiary of Russia’s clandestine cyber-support, which, rumor has it, is working overtime for Our Leader again this year.

I say “rumor has it” because an intelligence report detailing what Russia and other countries are doing to try to influence our vote has been bottled up in the Department of Homeland Security since July. When word of the report leaked, as things involving Trump’s schemes to enrich or protect himself at the expense of the American people often do, DHS Secretary-designate Chad Wolf explained the report was being withheld because it was “poorly written.”

You’ve got to hand it to the Trumpsters, they’re creative liars. Chad’s excuse was so ridiculous, I had to wonder if he’s eyeing a job at Saturday Night Live.

When asked about the delay, Bill Barr’s counterpart at DHS said the report was being rewritten, without saying when the wordsmiths in Moscow might finish correcting it. Even considering all the translating that must be involved, two and a half months seems like an awfully long time.

An awfully long time unless you suspect there might be some things in the report Don the Con and Vlad the Bad don’t want us to know about; things like the coordinated lies the Trump campaign and GRU have been circulating about Joe Biden’s purported mental health issues. It’s the kind of coincidence that might lead someone not quite as white shoe as Mueller to conclude the White House and Kremlin are working together.

But there’s more, much more. There’s Trump’s refusal to condemn the bounties Russia has reportedly offered Taliban fighters who kill American GIs in Afghanistan and the poisoning of Aleksei Navalny, the Russian opposition leader, which our disgraced former Leader of the Free World has pointedly said nothing about.

More alarming still, is the civil strife here at home Trump has been encouraging, by winking at the armed right wing militias and making excuses for the young Trump supporter and militiaman who killed two people in Kenosha, on the one hand, while condoning police violence against African Americans and branding as “violent anarchists” those Blacks and Whites who’ve joined the Black Lives Matter protests for social justice, on the other.

Add to that the five secret phone conversations the White House has confirmed Don and Vlad have had since the beginning of the year, without the customary note takers who normally listen in on conversations U.S. presidents have with foreign leaders, and you have to wonder.

Or, you become convinced, as Carol Minarick did several years ago and as I am now, the 45th president of the United States is a 21st century Benedict Arnold, engaged in the kind of collusion with a hostile foreign government that constitutes treason. 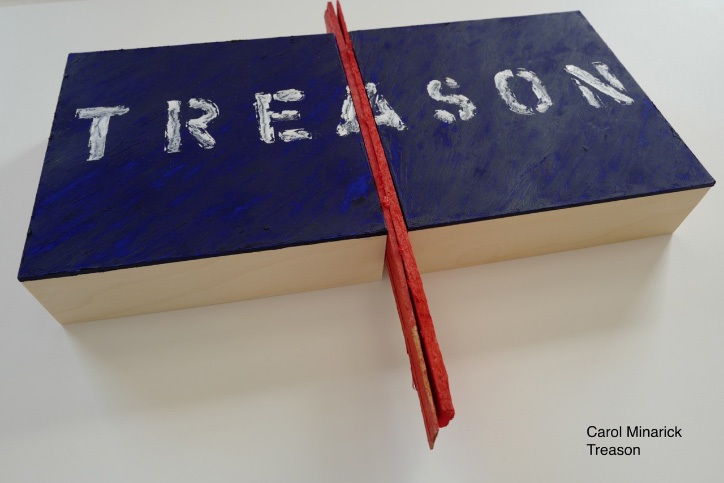 Treason by Carol Minarick (Oil on panel, acrylic on wood, 14.5″ x 16.5″ x 2″) 2018 | First exhibited in Washington, DC, as part of THE CENTER FOR CONTEMPORARY POLITICAL ART’S inaugural exhibition, The Art of Change in the Age of Trump.

Carol’s Artist’s statement was prescient: “NO WAY, fifty years ago as a political science student in Washington, D.C., could I have imagined making this image about the President of the United States of America. Over the years I worked hard to become an artist. And art is my language. So here I am at 76, along with so many other citizens, believing events do conspire to treason. TREASON, a harsh yet simple word in its appearance. Of ancient origin. I wanted to make it visible.”

Since collusion isn’t a legal term, let’s call it what it is. Trump’s relationship with Russia is a conspiracy to defraud the People of the United States and, in addition, to hide Trump’s acceptance of a campaign contribution in kind from a foreign entity, which is illegal.

And it’s a conspiracy that didn’t stop when Trump was declared the winner of the 2016 election. It’s a continuing conspiracy that began in 2016 and will continue as long as Trump is president; Russia’s help getting Trump elected and re-elected will be repaid by his ongoing efforts to further Russia’s strategic interests, by rupturing our traditional alliances and creating the kind of domestic discord that will remove the United States as a global player, and Russia’s rival, on the world stage. 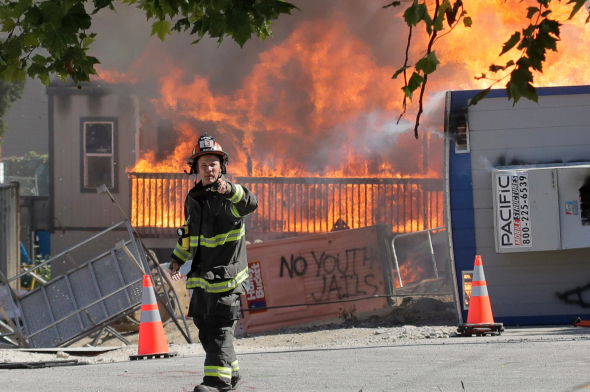 It’s impossible to believe Trump can win a free and fair election, the standard the U.S. Government itself uses to judge the legitimacy of elections held in other countries. Yet it is not beyond anyone’s imagination, including Joe Biden’s, that Trump will not leave office voluntarily.

The expectation, of course, is that he will try to find a way to have the election cancelled; disrupt the voting on election day or the counting of absentee or mail-in ballots afterward; charge massive fraud and refuse to recognize the result; or maybe the Russians will steal the election for him by hacking the voter rolls or the state computer systems that tabulate the results.

What is particularly ominous is Trump’s defense of the armed militias and worst elements of the local police forces. Judging by the reports from Kenosha, they already see themselves as allies in his war against “violent anarchists” and the threat of unruly Black mobs looting and pillaging the nation’s cities Trump has conjured up, even as he’s deliberately goaded them into most of whatever violence has occurred.

Thanks to the NRA and the Republicans (with some help from Congressional Democrats), it’s impossible to know how many guns and assault weapons are owned by U.S. citizens and others living in the United States. The accepted figure is that there is one gun for every man, woman and child in the country, which would mean about 330 million firearms.

Of those, about 15 million are thought to be AR 15s or the equivalent, the semi-automatic military-grade rifles the 17 year old militia member used to kill two people in Kenosha and most of the school shooters have used to kill grade school and high school students and teachers.

Will the militias and local police become Trump’s SS, the storm troopers he’ll need if he refuses to concede the election and decides to use terror to deter the demonstrations that will inevitably occur as a result? It’s probably a good bet Biden will concede rather than risk thousands being killed in clashes with Trump’s armed thugs. He doesn’t seem like the type who would call on his supporters to mount armed resistance. 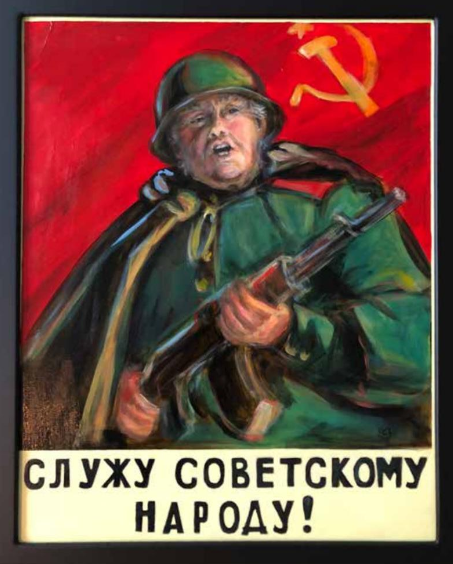 WHO’S YOUR DADDY? by Catherine Johnson (acrylic on board, 25″ x 21″) 2016 |First shown in Washington, DC, as part of THE CENTER FOR CONTEMPORARY POLITICAL ART’S inaugural exhibition, The Art of Change in the Age of Trump (Sept-Nov 2018). Catherine’s artist statement made her portrait of Trump in a Soviet army uniform all the more intriguing.

“The inspiration for this piece came from Soviet propaganda posters I saw while working for the US government during the Cold War. I recreated the background from a poster and replaced the young, fit, Soviet soldier with Trump’s image. His hands are disproportionately small to remind the viewer of the insanity of the Republican campaign banter. The caption underneath says, “I serve the Soviet people.” Indeed, it appears Trump is serving Putin’s neo-Soviet system. The likelihood of collusion between Trump and Putin is abhorrent, especially when considering the danger which my colleagues and I faced while doing our jobs.”

Putin has undoubtedly taught Trump a lesson Russia’s security services learned after Stalin died, a lesson he has used to keep himself in power for 20 years now. And that lesson is, it’s not necessary to kill or jail millions or even thousands to maintain control; assassinating or jailing one well-liked or powerful opponent every so often is enough keep the rest in line.

Putin arrested Mikhail Khodorkovsky, the richest of the oligarchs and most politically ambitious, in 2003 and kept him in jail for 10 years; it was enough to keep the other oligarchs where Putin wanted them. Same for journalists after Anna Politkovskaya was gunned down in her Moscow apartment building in 2006.

Putin’s henchmen also apparently find it necessary, perhaps as a point of honor, to poison KGB defectors who talk too much from to time, reminding others who may be thinking of defecting that leaving Russia’s secret services is not a cost-free proposition.

Navalny was poisoned en route to speak at a demonstration in Russia’s Far East, quite obviously because Putin is willing, may even find it useful, to allow opposition leaders to emerge from the intelligentsia and middle class in Moscow and St. Petersburg, where Putin knows they are not a threat to his power. But encouraging opposition to the regime outside Russia’s two biggest cities, especially in the sparsely populated Far East, near China, is not something Putin is apparently willing to tolerate.

Knowing you could be killed for crossing an invisible line or for breaking a rule you’ve never been told about, is one way autocrats keep opposition leaders from becoming too bold. That usually means they’ll never do what’s necessary to become a real threat to the autocrat in power. It’s usually the autocrat who causes his own downfall by becoming too greedy or too despotic.

If Trump prevails and remains president, the price the United States will pay will be enormous. There’s already speculation that if he has a second term, Trump will withdraw the United States from NATO, ending the alliance that contained Russia during the Cold War.

That would give Putin carte blanche to reassemble the old Soviet Union, said to be his fondest strategic goal; it would also probably make the First Amendment not worth the parchment it’s written on. By removing the United States as a major power, Russia would, by default, become China’s principal rival and the world’s other superpower.

Our weakness would be compounded by the domestic turmoil that will occur if Trump remains president. It’s likely there would be open warfare between Blacks in the cities and the White supremacist militias, which would become an “internal security” force belonging to the Republican Party, not the federal government, directed by Trump from party headquarters, not the White House.

There would also likely be anti-Trump urban guerrilla forces, some fighting to seat Biden and Harris as the country’s legitimate heads of government, some not; their principal targets would be the police and economic infrastructure in cities across the country.

If you weren’t in El Salvador or Argentina or Northern Ireland in the 70s and 80s, you don’t know what that means. And, believe me, you don’t want to know what it means, by having it happen in the United States.

What should happen, though, is that, win or lose, Trump should be tried for treason.

What will happen is anyone’s guess. But we can be fairly certain of one thing.

Our future for many years to come will be decided between now and Inauguration Day, 2021. 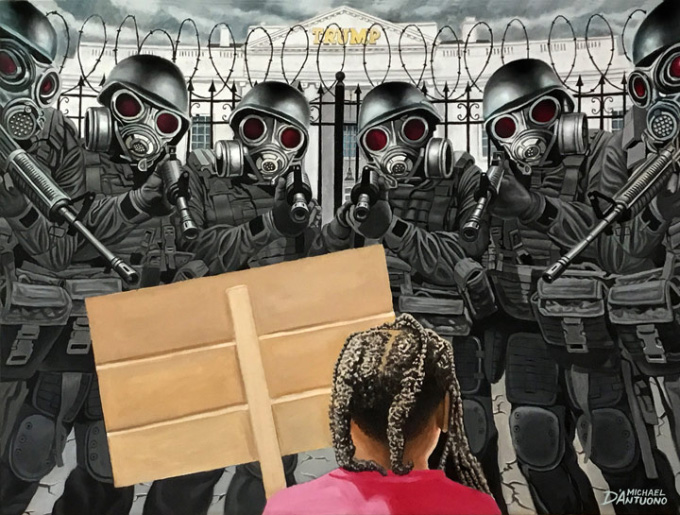 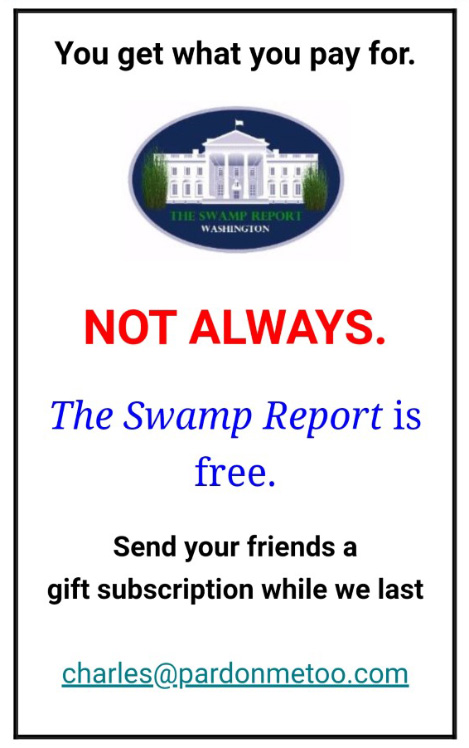 Copyright ©2020 CHARLES KRAUSE REPORTING LLC, All rights reserved.
You are receiving this because you expressed interest in Charles Krause Reporting Fine Art

Previous Article
Cirque du Trump + Postwar Era Draws to a Close
Next Article
Who Will Save Us?