“Normally I love the surreal feeling I experience in the greenbelt, gazing up that hill and seeing trains whizz by, but today was different.”

Editor’s note: Caitlin’s journal ended abruptly on the evening of Sunday, May 24, the night before George Floyd was murdered. Now it’s over two months later, the middle of August, and obviously a lot of things have happened in the time that’s elapsed since we started posting Caitlin’s journal entries. It was an editorial decision on our part to let the journal run to completion before jumping in to say what had happened to Caitlin. You can start at “Caitlin’s Story Continued, 1” to catch up.

The path into the greenbelt behind my house was completely overgrown. Since it was out of the question to beat back all those thorny brambles, Nicole, Caitlin and I entered through some broken fence boards behind an apartment complex at the end of my street.

We had to sit on our butts and slide down a slanted concrete wall into the drainage ditch (basically a tree-lined sidewalk enclosed on one side by neighboring backyards, and on the other by a steep hill leading up to the train tracks). Normally I love the surreal feeling I get gazing up that hill and seeing trains whizz by, but today was different — my nerves were shot. 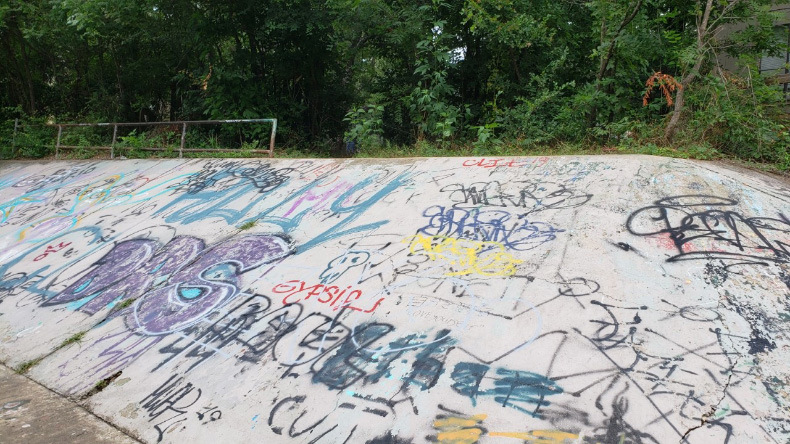 This is the concrete wall we had to slide down to access the drainage ditch leading to Caitlin’s campsite.

Considering that Caitlin had just fainted in my driveway, she did much better on the hike than I thought she would. As we walked along, she told us about her crazy fallout with V, explaining that the woman had been her personal shopper before Covid, one of the only people she saw on a regular basis. “When I returned to Austin after Li disappeared, she seemed like a good person to ask for help. She invited me to stay at her apartment and even let me bring Lola. But it turned ugly quickly.”

Caitlin hesitated. Then she said, “In the middle of the night, she climbed in my bed and tried to have sex with me. I fought her off and she went nuts, throwing a glass of water at my head! I got out of there as fast as I could.”

“Drove over to Nicole’s and slept in my truck outside her house. But there’s more about V, it gets worse.”

She paused as a train shrieked past. Then she told us that V had called her the day before, saying she’d been beaten up by two Asian men. “According to V, these men claimed that my husband is still alive and that they’d give me information about him in exchange for the key fob. Oh, and she sent me pictures.” Caitlin stopped and pulled out her phone, showing us several images of a butch-looking woman with a bulging black eye and bruises on her throat.  Something about the woman was familiar. Nicole said so too, but neither of us could figure out where we’d seen her.

“I was supposed to meet with V this morning to discuss the exchange,” Caitlin continued, slipping her phone back into her pocket. “But before that could happen, the two Asian guys I told you about showed up at your client’s house and I had to run!” She thought a minute. “I wonder if they’re the same guys who beat V up.”

“That would make sense,” Nicole said.

Caitlin slapped at a mosquito. “Except that my friend Henry Sullivan, who does research for me and has my computer, called to say he’d found spyware that traces back to an IP address connected to V. Apparently she’s been watching my online activity for months!”

We’d reached the creek at this point and had turned west to walk along its edge to the spot where Caitlin would be camping. The first thing I did when we got there was dig a hole with my son’s beach shovel and bury the key fob in the dirt. I didn’t care if it had the cure for Covid hidden inside it or not, the key fob was so dangerous that it had to be made to seem as if it had totally disappeared from earth.

After that, I unfolded the tent and began setting up. My thoughts raced. Nothing about V made sense. Why would she have hacked into Caitlin’s computer? Why didn’t the men who’d roughed her up make her disappear like they had Dr. Wang? And why had V hung up on me just after I’d told her that Caitlin would be camping out in a tent behind my house?

I had a sinking feeling that V was one of the bad guys, and worse, that I’d been the one to give her exactly what she wanted — Caitlin’s location.

We are publishing this story on Mondays and Wednesdays until it’s told in its entirety. We highly recommend starting at the beginning with our series of videos, when we first announced that Caitlin was missing til when we finally found her and met in person for the first time. If you’d like to start in the middle with her journal entries, click here.

Cover photo: The walk to Caitlin’s campsite before the drainage ditch dead ends at the creek.