The World of Franyo, Part 17: Love & Some Bad Habits 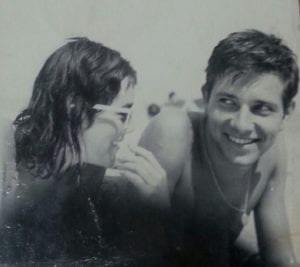 The summer I was fifteen, I fell in love for the first time and this led to a very dark phase of life for me. I don’t want to turn this into a drunkalogue but I’d already picked up a few bad habits – well, really just two: cigarettes and booze. My parents always had wine with dinner and cocktails before, no big deal. They were avid non-smokers. Totally cool. But the spring I turned thirteen, they gave a huge garden party and I traipsed around the property in the waning light, drinking from the bottoms of the guests’ glasses. I remember feeling good, so good that I raised my arms skyward, praising whatever God might live up there, and telling myself that this was the way I always wanted to feel. A few months later I started in with the cigarettes. My parents had made the mistake of sending me on a rather unsupervised trip to Europe while they themselves were traveling in Africa. I wanted to seem older than I was, so I accepted a cigarette – not a sissy American cigarette, mind you, but a Gauloise, black and strong. OMG! I didn’t cough or choke. No, my lungs expanded happily and the nicotine receptors in my brain lit up like a switchboard and demanded more, another puff, immediately. So my routine over the next few years was as follows: Stay up until every person in the house had gone to bed, then lean out the window and smoke five cigarettes in a row. Didn’t matter if it was freezing out, that was my practice. Same with booze. I’d drink at night, when everyone was asleep, adding water to the bottles so no one would know.

The summer I was fifteen I went to a French-speaking camp in Bar Harbor, Maine. On the flight up there, I sat next to a dirty-blond pony-tailed girl who asked a lot of questions with a directness I wasn’t used to from my peers, and then proceeded to get airsick all over me. Her name was Nancy. She became a lifelong friend. The camp was beautifully situated: sun-lit woods, stone walls, a long sweep of lawn overlooking the sea. As far as I was concerned there were two good things about the place: 1) We were allowed to smoke as many cigarettes as we wanted whenever we wanted. 2) Not too much was expected of us either in the realm of sports or studies. And then a third good thing developed. A few nights after we arrived, the entire camp gathered on the lawn for a message from the director. As we were sitting there listening in the redolent twilight, a very handsome young man in a blue blazer wandered past and sat down at the edge of the circle. Our eyes met – was that my imagination? All sorts of receptors started zinging in my brain. 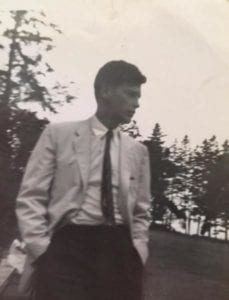 Turns out he was the camp gardener, a recent Princeton graduate who would be entering the army in the fall. His name was John. For weeks he was all I could think about. Meanwhile, my new bff, Nancy, had her own developing situation with one of our teachers, a skinny twenty-six-year-old guy in glasses from Belgium. Far too old for a girl of fifteen, but it was an unusual summer and unusual things happened. For me, the romance with the Princeton gardener actualized. He was the first man to really kiss me, the first man whose body I touched and wow I didn’t know how to handle the torrent of emotions flooding my system on a daily basis.

Especially when the summer was over. For six weeks I’d lived in the eternal present and now it was done, finished, we’d never see each other again. What lay ahead of me was an antiques-buying trip in Austria with my parents (deadly) and a new boarding school in the fall (too frightening to contemplate). At least Nancy, who went to a very progressive private school in Manhattan, didn’t have to face that particular upheaval. But here’s where a weird kind of repetition or synchronicity clicked in. Only as we were leaving Maine did we discover that our mothers had spent a summer together in Germany when they were teenagers. Nancy’s mother had been sent to Hamburg to brush up on her German. And who was her new, mischievous good friend, but Franyo. 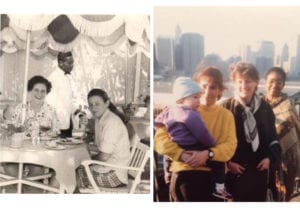