The decision to go to boarding school was entirely my own. Till then I had been at a very traditional Episcopalian day school that went up to the 8th grade for boys and the 9th for girls. It was the sort of place that had wood-paneled walls, morning hymns, and lots of field hockey. I’d been bullied my first year there, mainly for being in the armpit of adolescence with a bad haircut and an ungainly body. But by the second year, which was also the year I started smoking cigarettes, I’d bloomed into a graceful, dark-haired girl with talent – I was put into a special English class, six of us hand-picked for our writing skills. The teacher, who was also our assistant headmaster, was uncompromising. If you didn’t write to the top of your skill, he’d flunk you. He wanted me to follow him to his next job at an all-girls boarding school in upstate New York, but at the last minute I opted out. I wanted to go to The George School, which was co-ed and Quaker. My parents would have been happy if I’d stayed home. But I’d romanticized boarding school, and how bad could it be if it were co-ed? Plus Quakers were pacifists and I liked the idea of their silent meetings. 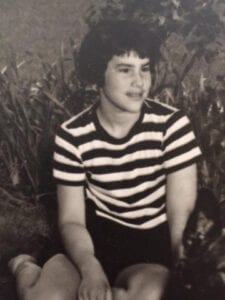 The George School was in Pennsylvania. From the minute I got there I was miserable. It was strict! There was an atmosphere of pent-up tension and secrecy that went against my grain.

Teachers were always spying on students, sniffing at them to see if they’d been smoking in the woods, or yelling and motioning at them if they walked too far from the main building with a member of the opposite sex. There were pregnancies, like the prefect at my assigned table in the dining hall who always wore a loosely belted trench coat to cover up her growing belly (this was in the early 60s before Roe V Wade). She was sent away with lots of rumors. And there were suicides, bleakly acknowledged but barely spoken of, such as a hanging the year before I arrived.

It was at this school that I had my first exposure to epilepsy, a French teacher who had a seizure while in class. I began to grow more and more depressed, not just sad-depressed, but something worse and deeper: a constant flat blackness or despair that took away all interest in life. We were going to die anyway, so what was the point? As Freud wrote: “The moment one inquires about the sense or value of life, one is sick.” That was me, caught in a despondency I didn’t understand and couldn’t get out of.

Part of it was caused by the abrupt end of romance the summer before, and part by the inhospitable and unsupportive policies of the school for students like me. But I can’t pretend that part of it wasn’t also an underlying tendency for melancholia. To be fair, I never spoke to anyone about what was happening, not even my advisor who was an ordained minister and probably could have helped me out. I just kept to myself, going flatter and darker every day, listening to a stony inner voice that whispered, “What’s the point, we die in the end anyway.” The only thing that even halfway interested me was an ice cream cone sold at the school commissary, soft chocolate with a marshmallow filling. To this day I associate ice cream with depression.

Finally it was Christmas vacation. The despair followed me home. I was supposed to go skiing with a friend in Stowe, Vermont. My governess, Suzanne, was designated to chaperone us. We were to stay in the house of a local ski instructor who rented out rooms. I still remember his name, Rudi. And I still remember that expressionless voice that kept whispering, “What’s the point? We’re going to die anyway.”  After two nights in Stowe, my friend and I conned Suzanne into allowing us to go to a tavern, or club, where lots of kids our age hung out. It was a big, beery, smoke-filled place. When we saw none of our friends were there, we had the brilliant idea of hitching up the road to another tavern. A perfectly respectable-looking, middle-aged man in a sedan stopped for us. My friend got in and I climbed in after her. This was before the age of seat belts and the road was icy. We hadn’t gone very far when I looked up and saw we were headed straight for a car stalled on the side of the road. We were going to crash and I didn’t have time to brace myself. I jammed my eyes shut and was aware of my head going through the windshield but it all happened so fast, and the next thing I knew I was on the floor of the car. Thank God I had on contact lenses instead of glasses or I’d have been blinded. I spat out teeth. Otherwise I had no idea I’d been hurt.

But when they took me out of the car, I saw blood on the snow. I thought maybe someone else had been injured, but it was only me, the other two were fine. I was helped to a nearby hotel where I waited in the lobby till the ambulance came. I was in a complete state of shock, felt no pain, nothing, not even the blood draining down my back and side. The only thing I was conscious of was Suzanne’s scream when she saw me.

The ski instructor, Rudi, was there too, and he insisted that the ambulance take me to Burlington, where there were good surgeons, instead of a hospital closer by. As they lifted the gurney into the ambulance, I realized the life was draining out of me. In that moment I told myself to think of my mother, and then, no, to think of God, a strange thought as I’d been brought up without the concept of religion or even spirituality. As soon as I heard that word, God, in my head, I left my body.

I was totally conscious. I traveled through darkness toward a being of light. I had no sense of time or space, only that there was this candescent light that knew everything about me, that was the epitome of wisdom, kindness, peace, serenity, love. I wanted to get to it, fuse with it, be with it, but I was pushed back toward my body. I felt loss, a vast sadness. And then suddenly I was pulled to the light again. I thought, “Good. This time I’ll remember what it told me.” But I was overcome by darkness. When I became conscious again, a surgeon with a masked face was leaning over me.