They Called Them Freejacks (The Gray Zone, Part 3)

“We were labeled as ‘high yellow’ or ‘freejacks.’”

Editor’s note: This is a four-part story that will be published on Wednesdays during the month of September 2020.

Part 3: They Called Them Freejacks

When I came up with the idea to write this story, I reached out to all six of my dad’s sisters to gauge interest (he had seven sisters, but Aunt Iris passed many years ago). Aunt V and Aunt B responded almost immediately, and while it would have been nice to talk with the others, it’s probably a good thing I didn’t interview all of them because the story would go on forever. After my aunts, there was one person left to ask – my dad. I’m so grateful he agreed to talk with me because I learned so much from him about his childhood and family culture that makes me even prouder to be a Turkin (see My Creole Heritage – part 2 of this series).

This third section is the most challenging for me to write because it delves into the bowels of racism my family has faced (from both Blacks and whites), and each time I read through my interview notes I feel my chest tighten and a growing discomfort rise in the pit of my stomach. But on with it I go.

My grandparents didn’t have direct conversations about race with their kids. “Conversations generally centered around behaving and acting right,” Aunt V told me. Dad thinks that the choice to not talk about it was so that maybe no one would make a big issue of it. Since they were old enough to remember, my dad and Aunt B both identified as mixed race while my Aunt V identified as Black. To me it is surprising and fascinating that siblings in the same family identify their race differently.

As a child, my Aunt B hung out with all races even though she was told by peers to “stick to your own kind.” The problem was, she didn’t know what her own kind was. “We were labeled as ‘high yellow’ or ‘freejacks,’” she said. It wasn’t until adulthood that she learned the term Freejack was a reference to the color of her skin and harks back to the days of slavery when light-skinned Blacks or those of mixed race weren’t enslaved. 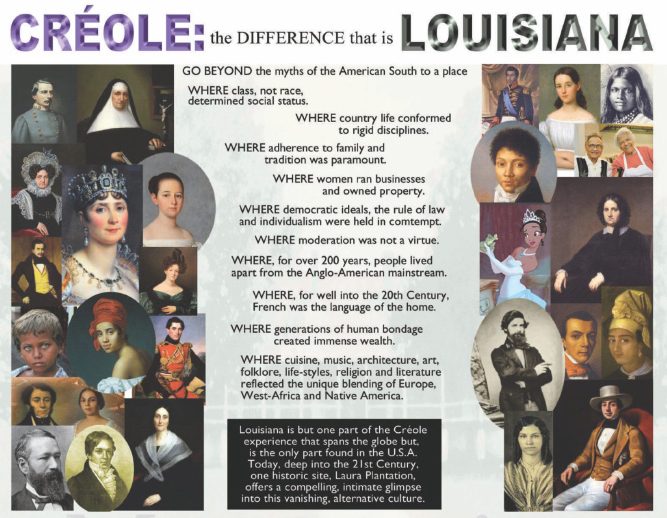 Laura Plantation Promo Photo | Located in Vacherie, LA, this old plantation home is a permanent exhibit that features first-hand accounts exploring the lives of four generations of one Louisiana Creole family. (It is on my to do list to visit!)

I had never even heard the term Freejack before all three of the family members I interviewed mentioned it, so of course I looked it up. Darrel A. Posey’s essay, “Freejack Lore and Anomaly,” offers a concise history of the term’s origin. In short, a Freejack is someone of a mixed-blood group who doesn’t fit into any of the “pure” categories (white, Black or Indian) that permeate the ideologies of Anglo-America. They are considered a mysterious people rejected by whites and held in contempt by Blacks. The essay states: “They are suspended, so to speak, between two social worlds, reflecting in their lives the tragedy of a people doomed to racial isolation.” Because of this, many mixed-bloods chose to remain obscure. Is this why my grandparents didn’t talk to their kids about race? I wish I could ask them.

When two of my aunts were in elementary school, a Black female teacher whipped them on the hand with a tree branch for reasons unknown. There was hell to pay for that — my grandparents took the issue up with the principal and school board and that teacher was fired. Around the same time, when my dad was in first grade, he began noticing that the other kids at school were darker than he was (schools were still segregated at this time). The Black children called him “white boy.” He and his siblings would eventually figure out that some Blacks hated them. Why? Because they had lighter skin. 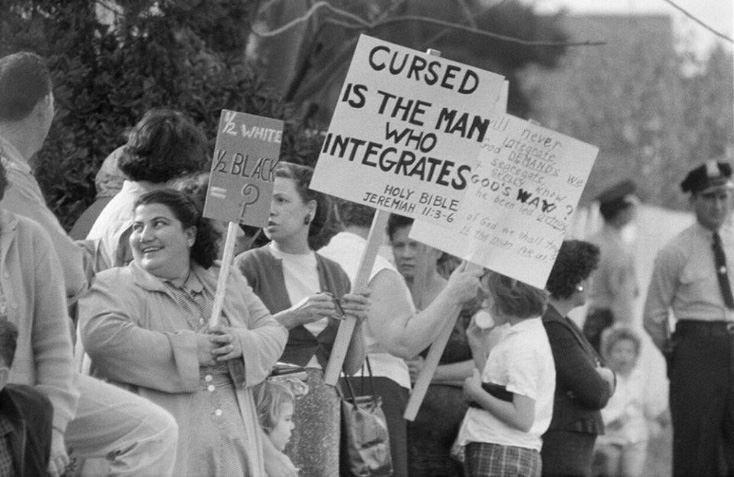 But their lighter complexion didn’t make them any more accepted by some of the white people either. In 1969, my nine-year-old Aunt V had to take a 5th grade placement exam at her new school which had just been desegregated literally two days earlier. Not only did she finish the test first, she scored 100%. When she handed the (white) teacher her test, the teacher accused her of cheating and threatened suspension. I imagine that school integration was in and of itself unnerving for a young child, and now she’d found herself in hot water with the teacher but didn’t understand what she had done wrong. She went home scared that she would be in trouble with Lu-Lu (her mom, my grandmother). The following day, my grandmother had a conference with the teacher. Lu-Lu asked the teacher if anyone else scored perfect on the test and when the teacher said no, Lu-Lu challenged her further and asked who the hell Aunt V had cheated off then. “This was the first indication my Mama was a bad ass,” Aunt V told me. But for the rest of the year, Aunt V was forced to sit in the last row of the class, and every time the teacher asked a question and Aunt V raised her hand, the teacher ignored her.

There are so many stories like this, too many to detail here. Like the time the (white) high school home ec teacher found out one of my aunts (not Aunt V) was marrying a white guy. “I don’t approve of biracial marriages,” the teacher said to Aunt V, having held her back after class. Aunt V told her it was probably a good thing my aunt wasn’t marrying her then. The teacher threatened to suspend her for a day and Aunt V told her, “Lady, you don’t want to have my Mama up here ‘cause she don’t play!” Aunt V was taking a page out of Lu-Lu’s book. (For what it’s worth, that fire lives in my mixed blood, too — when I feel like I have been wronged, my words can be extra spicy.)

The most disturbing story I heard from my aunts was about when one of their brothers, they don’t remember which of the five, started dating a white girl. Someone left a burning cross in their front yard. If you are unaware of the symbolism here, the burning cross was a method used often by the Ku Klux Klan to terrorize people of color. My grandparents grabbed all the kids and put them into the farthest bedroom from the front of the house and told them to stay there until they came back. I can’t imagine the fear my grandparents felt, but I think my aunts were too young to really understand what was going on. Aunt V remembers that my grandfather went outside with a gun, the rage in his eyes murderous. But the look on Pa-Paw’s face the next day, when he was assessing the damage to his beautiful gladiolas and roses, was one of hopelessness. 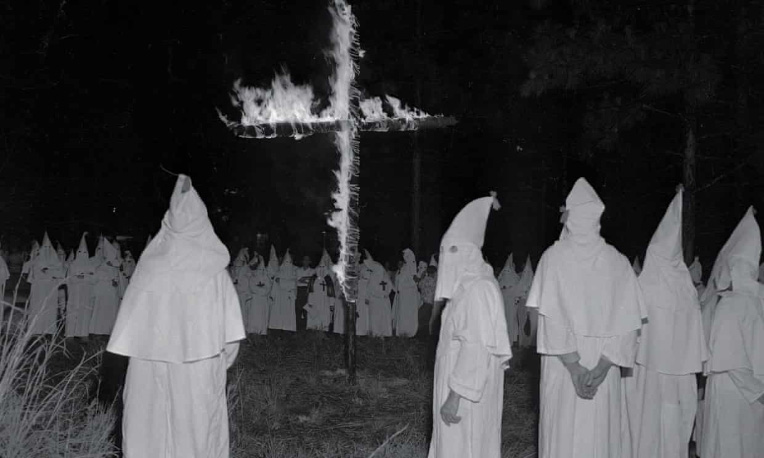 Ku Klux Klansmen burn a cross as part of a statewide demonstration against racial integration in Talluah, Louisiana, in 1962. Photograph: Pet Finlayson/AP

Aunt B told me that she only thinks about that night when she sees old movies like Mississippi Burning or A Time to Kill. “It’s a part of my past that I really wish I could forget about,” she said. But that has been difficult. Long after her adolescent years, when Aunt B married her husband, a handsome man with darker skin and green or blue eyes (depending on the color of his shirt), they had two stunningly gorgeous children. The first was born with a fair complexion and straight blonde hair, and the second with fair skin, straight blond/ brown hair and green eyes – they looked as white as the next white child. The family felt so uncomfortable at times, like when walking into a restaurant where everyone would stop eating to stare at them with confused looks on their faces… why do these black people have white children? My cousins were very confused about this and started asking questions about why people gawked at them every time they went out. “How do you explain this to your own kids?” my Aunt B wondered. “Where do you start when you are teaching them at home that skin color does not matter?”

I will attempt an answer to this question in The Gray Zone, Part 4, which will be published on Wednesday, September 30.

Author’s note: The three family members interviewed for this story are the sixth (b. 1953), ninth (b. 1959) and tenth (b. 1961) born in a family of twelve children. The older siblings’ school experience was much different – they went to school with only Black children because desegregation didn’t happen in their school district until after they’d already graduated. Because of this, the older siblings did not associate with white people at all. One of the older children, my aunt (b.1950), tells me that it took a long time for her to know that not all white people were prejudiced, which was eye opening for her after being called the “N” word so many times while growing up. It was only after schools were integrated that her younger siblings began to befriend white people. Indeed, Aunt V’s best friend in high school was white, but even then, in the mid-1970s, integration was not accepted by everyone. Aunt V’s friend was in love with a young Black man, and the three of them would meet up at the local burger joint after school. But the young man had to sit next to Aunt V, across the table from her white friend, because they couldn’t be seen sitting next to each other.