I’ve become involved with a woman who’s perfect in every way except for one thing — she has too many cats. We met on an online date a year ago and there was instant chemistry. I liked everything about her, the way she looked (gorgeous!), her sense of humor, her intellect, her view of the world, etc. From the start we couldn’t keep our hands off each other, even though we tried to take things slowly. I introduced her to my friends, and she was a total hit. She introduced me to hers — same thing. We even like each other’s parents. But here’s the problem. At the time I met her she had two cats. Fair enough. She keeps her apartment extremely tidy and she’s fastidious with the litter box, so no horrible smells. But when we were in our third month of dating, she acquired a third cat, claiming she just had to have a trio and this one was too cute to pass up. Fine, I could deal with that. Then, a few months later, I moved in with her and everything was copacetic until she came home with another cat, a rescue. I began to wonder if there was a problem here. Now we’re up to five cats, most of them rescues which makes her little addiction okay in her mind. I don’t know what to do about it. I love her and want to have a life with her, but sometimes it seems as if she loves the cats more than me. And her apartment is too small for so many creatures. I have talked to her about how I feel regarding the cats, and she just looks at me as if I’m crazy and says, “Oh honey, the poor things need a home.” She also promises there’ll be no more cats after this last one, but I don’t believe her because she’s said that before. Can you please give me some advice? 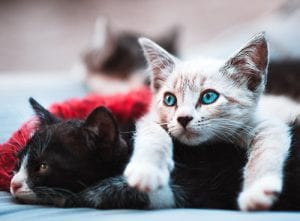 Well, it sounds as if your beloved is on her way to becoming a cat hoarder, although, from what you’ve written, she seems young for the condition. (Most animal hoarders start in their fifties, though of course there are exceptions.) Cat hoarders can have as many as twenty cats (or more) and generally they delude themselves into thinking they are great caregivers, while in reality their animals live in overcrowded, unhealthy circumstances, with poor nutrition and zero medical attention. Their cages will be filthy, feces everywhere along with the terrible reek of urine. Your girl is obviously not at that point yet. Her animals are well cared for — but watch out! She already has five cats and from there it’s a quick jump to ten, which I would say is the beginning of a hoarding situation. What causes this behavior? Obsessive compulsive issues, childhood trauma, attachment disorders. So be aware that this kind of hoarding is possibly a sign of mental illness. My suggestion? First you must decide how much you’re willing to put up with. Then, of course, therapy with a practitioner who specializes in hoarding behavior as well as perhaps an intervention of friends and family. All that may have to happen for your relationship to work. Be aware, however, that if your girl is a true hoarder, she very likely will hang onto her animals and put them before you. Sorry for the bad news. 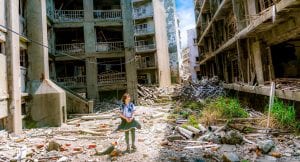 Well, I’m not quite like Knowles. On matters like war, I’d rather sugarcoat things and protect my kids by telling them everything’s ok and under control, and nothing will ever hurt them. In other words, I’d rather lie than have to live through sleepless nights with terrified kids asking a million questions. Seems a lot easier than telling the truth.

Hey, I think patriotism is important and that’s what I want to instill in my children. If they come to me with worries about war, my attitude is we will fight for the glory of our country, so toughen up and get ready: it’s everyone’s duty to be loyal and honor the flag. So, none of this namby pamby snowflake stuff for me or my family. If there’s a war, we’re in.

Previous Article
What to Tell My Children?
Next Article
A Seasoned Wife