Donald Trump gave his “I’m reopening the government for three weeks until I have another temper tantrum” speech in the Rose Garden this afternoon playing the part of a real American hero. He could have done this any number of times the House passed a bill to end the shutdown. So, why’d it take so long?

I have a few theories:

Of course, just yesterday the president was calling on the federal employees working without pay to make a deal with their local grocer. That’s right, he suggested they go to the grocery store and ask for free food. (This is real life, people.) So, that makes #4 very unlikely. I’d say this overnight turnaround is 1, 2, and 3 put together. You go, Mr. President. You’re a real American hero. 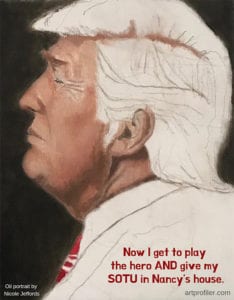