President Trump has directed the Office of Presidential Libraries to begin land acquisition for the construction of a tweetary to serve as a repository of the President’s tweets. The Trump Presidential Tweetary will occupy some of the most expensive real estate in the world, the six blocks between Trump Tower and St. Patrick’s Cathedral on 5th Avenue in New York City.

The president tweeted, “This will be a 125-story tower. It will cost billions. Think of that. Billions! It will be the greatest building in the history of mankind, so much better than all the rest, including the Babel Tower, which was built so poorly that it fell down.”

Presidential spokeswoman Patience Impatience was asked if there would be books in the Trump Tweetary. “We would like to have some books,” Impatience said, “but there isn’t room for them, and really, there aren’t that many that tell an accurate story of this administration. As you know, most books are fake news.”

When pressed about why there was no room for books in a 125-story tower, Impatience explained further, “The book space in the original plans is needed for President Trump’s millions of tweets. A state-of-the-art electronic index system will allow future generations to find out in a few seconds what the greatest leader of the 21st century thought about everything. If he didn’t think it, it won’t be there, and if it’s not there, it doesn’t matter.”

Impatience later returned to the press room after a meeting with an unidentified Oval Office staffer to correct her statement. “Of course, I meant to say the greatest leader of all time, not just of this century.”

The upper 100 floors will be reserved for use by the Trump family interests, including a luxury spa and hotel. Madame Tussauds has contracted to provide lifelike figures of the president and his family. The wax figure of the president will be dressed in the blue suit and seven-foot red tie he wore at his first inauguration. The figure of the First Lady will have a replaceable head in the case of future divorce. The First Lady’s body will not have to be changed inasmuch as all the president’s wives have had the same body measurements.

“That alone will save hundreds of thousands of dollars,” Impatience said, “depending, of course, on how many more wives the president takes. That is just one more example of the great judgment and foresight of this president.”

It is unusual for a presidential library to be constructed during a president’s term, but President Trump’s staff expects that he will be serving many more terms, and they do not want to delay construction any more than necessary.

“President Trump will be president for several more terms, perhaps forever, and it will be much easier to get Mexico to pay for the Trump Tweetary if we build it while he is still in office,” Impatience said.

The Russians have also expressed an interest in participating in the financing. Rumors that the Russian consulate will relocate to the new tower could not be confirmed, but Russian spokesman Igor Strontiumninensky said, “We are paying enough that we should get the penthouse, but your president is such a hard bargainer that we will probably settle for poolside space on the 100th floor with private access to the presidential offices—similar to our current arrangement.”

Spokesman for St. Patrick’s Cathedral, Monsignor Unaware Debaucherie was asked if the church was concerned about the Tweetary being built next door.

“Not at all,” Debaucherie said. “We will have millions of people coming to St. Patrick’s after going through the Tweetary to pray to God to have mercy on their souls.” 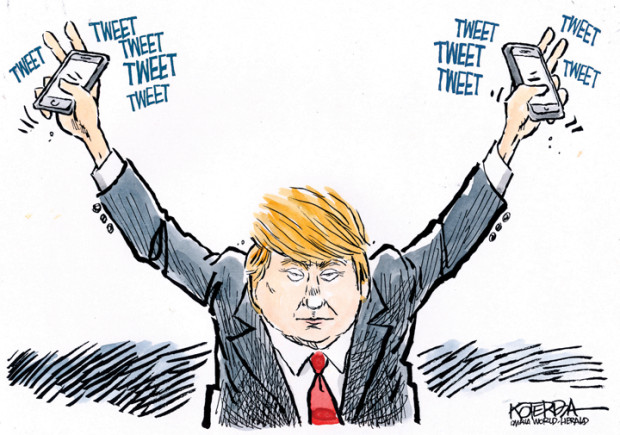 Previous Article
Spinning Upside Down, Relief From Trump Disorder?
Next Article
People Not Dying — What Next?