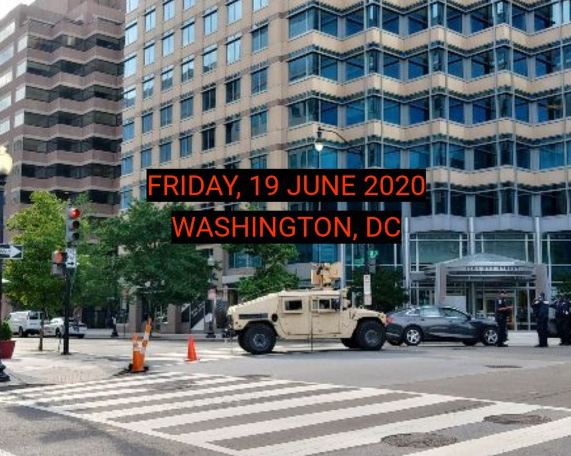 I took this photograph at the corner of 12th Street NW and I Street NW, five blocks from my home in the occupied city where I live.

Now published most weekends to chart the ebb and flow of the Washington Swamp,
a leading indicator of the nation’s dysfunction and political uncertainty,
by CHARLES KRAUSE/REPORTING FINE ART

Why would he want to infect his own supporters? 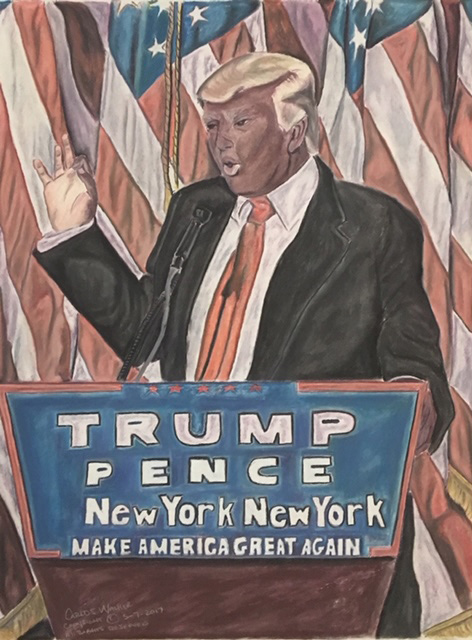 African American artist Carlos Walker was in prison when he saw a black prison guard discipline a white inmate and thought, what if whites had been the oppressed and blacks the oppressors throughout American history? By reversing racial roles in 48 chalk pastel drawings, he hopes white Americans will see for themselves the injustices African Americans have endured for 400 years. And once they feel what they see, the artist hopes their prejudices will disappear. Of course, some of those he portrays might just get angrier.
WHAT IF? The prison drawings of Carlos Walker,
now on display at THE CENTER FOR CONTEMPORARY POLITICAL ART
in Washington DC thru July 5th.

The President of the United States appears to be suffering from an
advanced case of malignant Narcissistic Personality Disorder.

This analysis of Trump’s condition
is not hyperbole or a joke.

There is only one rational reason why Our Leader would have chosen Tulsa to hold his first campaign rally since May, when he was forced to abandon his daily White House campaign appearances after suggesting the American people drink bleach to ward off the coronavirus, the ostensible subject the daily briefings were about.

The rational explanation for Tulsa would be that, three or four weeks ago, when he and his beleaguerd campaign staff looked at his polling numbers, they saw that Oklahoma was one of the states that had escaped the brunt of the pandemic and that God-fearing Oklahomans had largely ignored his bizarre corona care advice.

In short, he was still popular out there, where the wind comes sweepin’ down the plain (right behind the rain, to be precise).

It would never have occurred to Our Leader or his staff —pre-George Floyd or probably post-George Floyd, either, until it hit them in the face —that the date they chose for the rally, June 19th, would turn out to be so controversial and offensive to many Americans, not just African Americans.

OK, that was then; a month ago. But there is really no rational reason for Trump to have continued to insist on going to Tulsa this weekend, even if he and Barr found the Tulsa uproar a convenient distraction to try to bury their decision to fire Geoffrey Berman.

There were, however, several irrational reasons for his going this weekend and they all point to an even more serious problem, which is Donald Trump’s mental health.

As I’ve observed Donald Trump from afar over the past five years, and then up close during the startling and revealing White House briefings, his behavior increasingly reminded me of Jim Jones’ behavior, which I observed for eight or nine of the last 24 hours of Jones’ life, in Jonestown,

What I observed in both men were the inconsistencies in their answers to questions; their mood shifts; their unwillingness to admit or take responsibility for well-known facts that disproved the stories and lies they wanted others to believe about them; their sexual appetites; their disloyalty and infidelity; and, above all, their need to be the center of attention, to be in control and their willingness to jeopardize the happiness or reputations or lives of others to benefit themselves.

Then I matched my impressions of both men against the clinical definition of a pathology known as malignant Narcissistic Personality Disorder, which seemed to fit.

Then I discovered that Jackie Speier, the congresswoman from California, who had observed Jim Jones at the same time I had, had come to the same conclusion about Donald Trump’s malignant Narcissism.*

With this pathology in mind, much of Our Leader’s irrational behavior, and the danger he presents to those around him and to the country, becomes abundantly clear.

Why would Trump not have postponed or cancelled the Tulsa rally, for example, in the aftermath of the George Floyd murder; the insensitivity of scheduling the rally on Juneteenth; and the sudden spike in COVID-19 cases and deaths in Oklahoma that will almost certainly explode in two weeks? Why would he take the risk of holding the rally in an indoor arena where social distancing was neither possible nor desirable, given Trump’s desire to fill every seat to show how popular he is?

The answer is that persons suffering from malignant Narcissistic Personality Disorder typically do not care about what happens to others, only what’s best for themselves at the moment, not long term; because they never admit they’ve made a mistake; and because they cannot lose control, which is what it would have seemed to Trump had happened, had the spike in COVID-19 cases forced him to cancel the Tulsa rally.

And, above all, because Narcissists crave attention and recognition and approval, which is what the rallies give Trump. And because he fears he will lose the election without them, which would mean disapproval and prosecution for the hush money he ordered Michael Cohen to pay the two women he was having affairs with before the 2016 election, and jail time if convicted—the ultimate loss of control.

To make matters worse, from his perspective, the rally was judged a failure because the Tulsa arena was not full.

Since narcissists never admit failure or acknowledge their own shortcomings, Trump will blame the mess he made in Tulsa on someone else, maybe his campaign staff; maybe Antifa; or maybe the CDC.

And heads will roll. Or something worse.

*Jackie Speier was Congressman Leo Ryan’s legislative assistant in 1978; she was badly wounded when I was slightly wounded and the Congressman was killed by Jonestown gunmen, shortly before Jones ordered his followers to drink the cyanide-laced punch that left more than 900 of them dead. 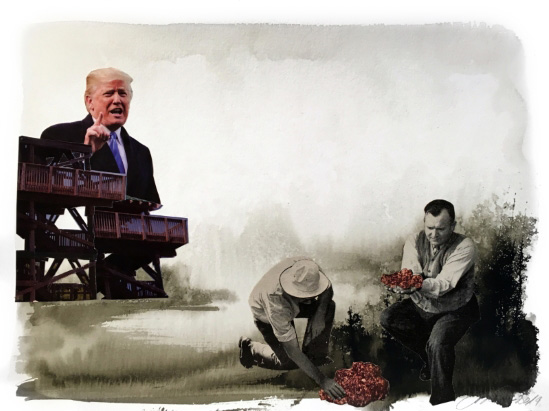 Mining the Swamp, Jim Boden’s collage and watercolor on paper, speaks to the artist’s well-founded suspicion that Our Leader has found gold in the Swamp, which he has, of course, kept to enrich himself.

While it could be argued Our Leader has at least tried to fulfill most of his campaign promises, from recognizing white supremacists as “very fine” people to adopting xenophobia as a central tenant of our foreign policy, he has done nothing about the Washington Swamp he promised to drain.

Presidential historians say that during Our Leader’s administration, dishonesty in government, abuse of power, policies harmful to our national security and welfare, personnel turnover and corruption—all of which contribute to the Swamp’s toxicity—have reached record levels.

As a result, the Department of Homeland Security, which is responsible for measuring the breadth and depth of the Swamp— when DHS is not pepper-spraying demonstrators near the White House or using its border security aircraft to harass and surveil American citizens exercising their 1st Amendment rights—reports the Swamp is three times larger and twice as deep as it was when Our Leader took office three years ago.

Meanwhile, DEA, which measures the Swamp’s water quality, reports the filthy, smelly swampwater is now so polluted even the Capital’s rats refuse to drink from it, deserting the Swamp as they might a sinking ship.

“It’s criminal,” a DEA water-sample-taker was recently quoted as saying, speaking of the rats but asking that his name not be used for fear his comment might be interpreted as a description of the Administration as a whole.

Washington think tanks and other observers have been warning for some time that the Swamp’s spread and its polluted water pose an existential threat to the departments and agencies closest to the White House, focusing mostly on State, Treasury and the FBI.

But it appears Justice may, in fact, be most at risk.

Since our report last week detailing the reasons William Barr is unfit to be Attorney General, The Swamp has learned the AG is personally involved in trying to prevent the release of a GAO report documenting the extent to which the long-admired pillars at Justice have been weakened by the torrents of polluted swampwater that gush daily from Barr’s office.

Even before the Berman firing this weekend, the GAO report said Justice Main smelled like a cesspool; looked like a hastily-abandoned Antifa hideout; and would soon provide an unacceptably dangerous work environment for its employees.

That would be especially true, the report noted, for those lawyers hoping to take advantage of the Department’s revolving door to high paying jobs in the so-called private sector, defending the corporations and individuals they and their colleagues have themselves accused of the collusion, coercion, fraud, insider trading, bribery and other criminal activity long associated with Wall Street traders, real estate developers and public officials who never think they’ll get caught.

“By early September, our inspectors warn the toxic swampwater will likely be further contaminated by the Attorney General’s efforts to ensure the President’s re-election. At that point,” the GAO report warns, “our engineers estimate the swampwater will have weakened Justice Main’s foundation to such an extent, we will be forced to declare the Department structurally and morally unsound.”

Barr has told the President, according to our sources, he better pray that day won’t come. 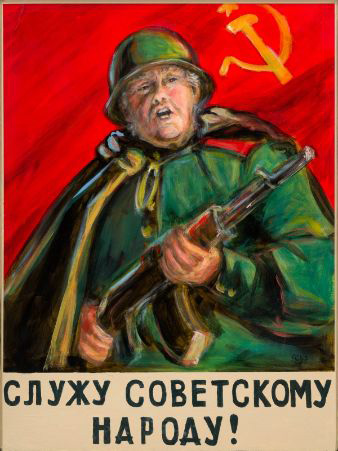 NEWS FROM THE SWAMPLAND
YOU WON’T FIND ANYWHERE ELSE

AND INTEND TO REMAIN SO

Previous Article
The Constitution Issue, Part 2: Why a Religious Zealot Shouldn’t Be Attorney General
Next Article
The White Power Issue (The Swamp Report)