As the title suggests this exhibition is bringing two fundamentally different artists and ideas together. Blasto, a graffiti artist, whose work is graphic and bold in style and Ernesto Walker, his antithesis, who employs mathematics and machinery in sculptural installations. Coka Trevino, curator of the show, strove to unify these two artists to display not only opposite ends of the spectrum but the diversity present in the art of their hometown of Monterrey, Mexico. Speaking with Coka I was intrigued to learn about the bustling art scene of the city and how it has produced these singularly unique artists. 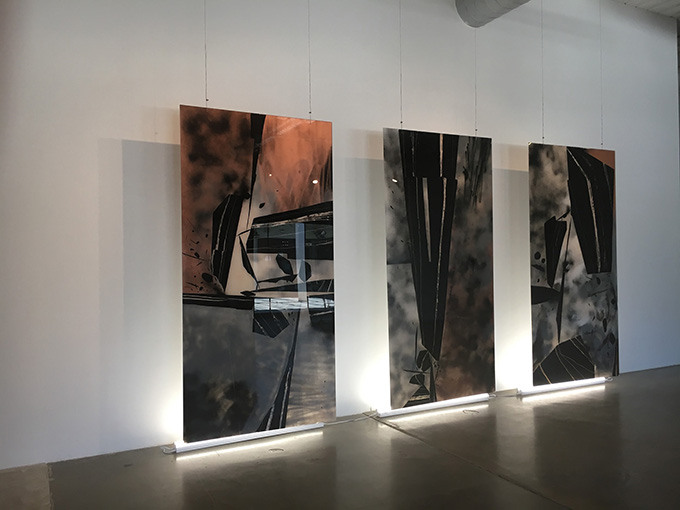 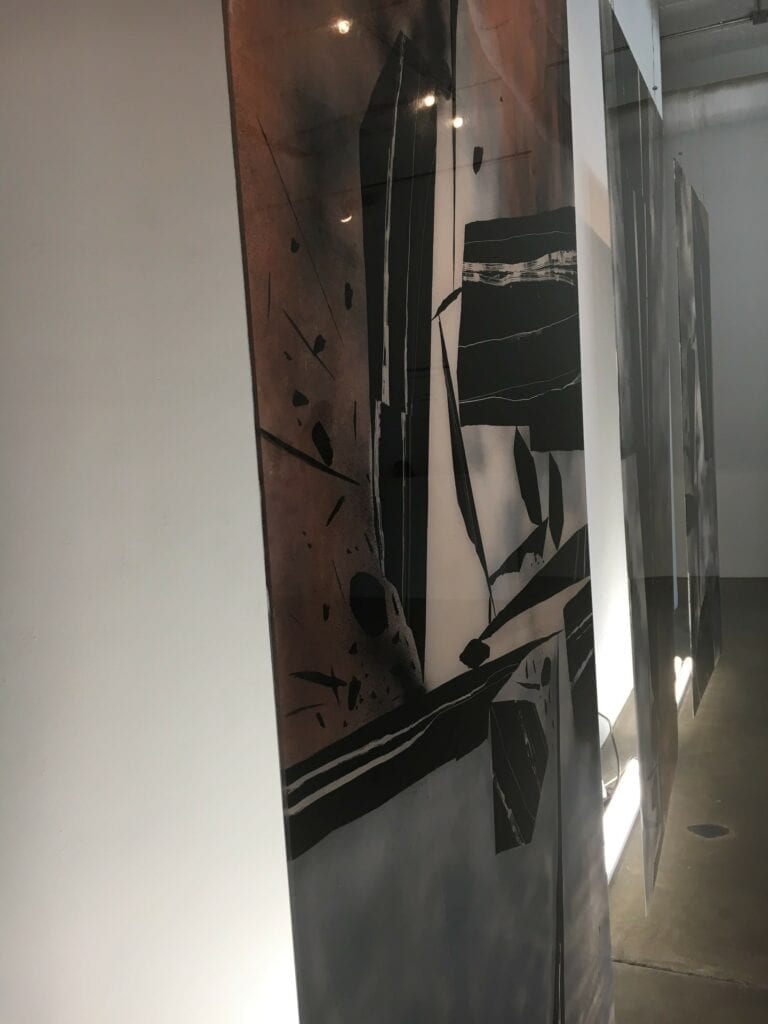 The work of Blasto focuses on the visible and the tangible as well as the mutable. Known primarily for his graffiti found in and around Monterrey, the artist’s style has a graphic sensibility that is heavy on shapes and tonal colors. In this exhibit, Blasto takes his practice inside the white cube space, but does not shrink his work to fit within the four walls. The Capsules series displays three 48 x 96 inch acrylic panels suspended from the ceiling with fluorescent lights anchored on the floor. Building up the surfaces of each panel with various layers of vinyl paint and spray paint, each Capsule (shortened to C 01, 02, and 03) seems to push and pull in the space. The abstracted forms are reminiscent of geological forms found below the Earth’s surface — almost like shifting tectonic plates. 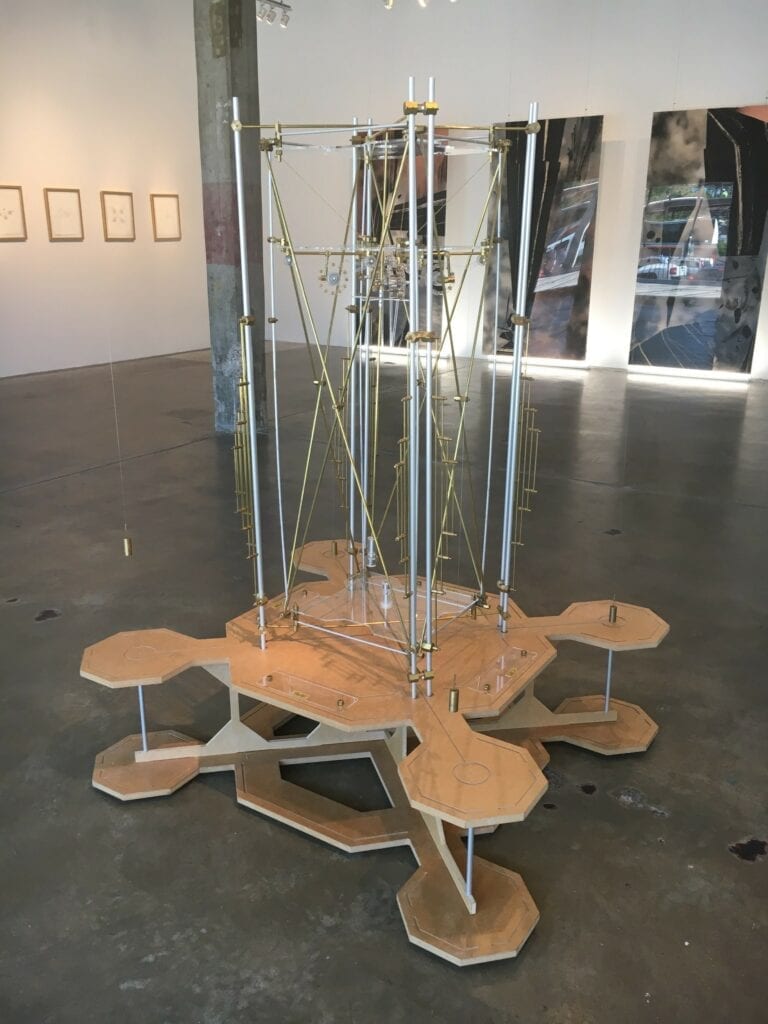 Ernesto Walker, Study No. 2 from the “Conflicts with the Center of the Earth” series, 2019 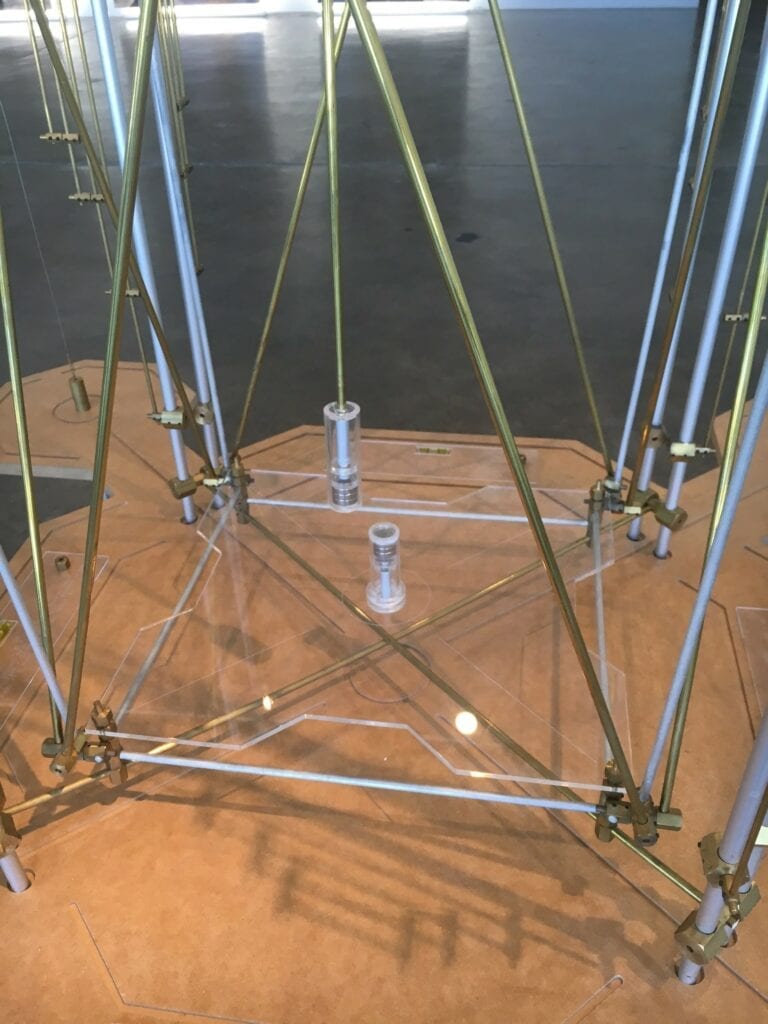 Detail of Ernesto Walker’s Study No. 2

While Blasto’s art is concerned with the moment and spontaneity, Ernesto Walker’s art is about rigidity and preciseness. Study No. 2 from the “Conflicts with the center of the Earth” series displays a beautifully crafted machine that has no actual purpose. It is a pendulum whose natural oscillation is impeded by two opposing magnets, making it completely nonfunctional. The sheer craftsmanship and scale of Study No. 2 is impressive — especially to be noted are the brass and acrylic parts that seem too attractive for operational use. It is the over-sophistication of nothing that I find humorous and irreverent, and similar to work by artists Peter Fischli & David Weiss.

Opposites co-substantiate one another and in Unity of Opposites, Blasto and Ernesto are working at either ends of the spectrum; but it is the tension they create within their subjects that is the unifying force.