On the Verge of a Breakdown in Chicago

I’m at a loss. My husband and I have been married for 11 years, together for 14. When we met he was a waiter at a downtown restaurant, a job he used to supplement his income since he is an unpaid writer At least he calls himself a writer. Mostly he just shuts himself up in our bedroom for most of the day leaving me to deal with the family. And also to be the breadwinner. I have my own business, a refinishing shop, and he sometimes contributes his time to help me there, but it is all on me to make the money to pay our rent, feed our three kids and pay all the rest of the bills. My mental and emotional health are suffering. I feel so underappreciated. What makes it worse is that he won’t work, saying that to be a writer, one mustn’t have another job, but he criticizes the choices I make for my business. I feel like I have a 4th child. I love him very much and want this to work out, but he, being from an Arab country, looks at himself as the man of the house, and it makes me want to slap him.

On the Verge of a Breakdown, Chicago, IL 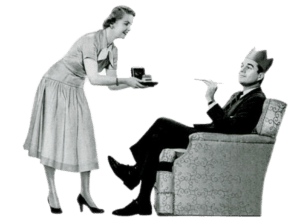 Ah, the familiar story of the unemployed wanna be writer! I know this one because, for awhile there, it was me. That’s right. People would ask what I did in life, and it felt so good to let those words slip from my mouth: “I’m a writer.” Didn’t matter that I hadn’t actually written anything. I could always say I was working on a novel. Eventually, of course, I put my money where my mouth was and wrote quite a number of novels, but that was because I really had a desire to do so. Your husband, from the sound of it, just wants an excuse to hang around the house all day doing nothing. What a lazy bum! And you encourage him by allowing his behavior to continue. You think you are being a virtuous wife taking the burden of the household on your shoulders, but you’re simply being a fool. Doesn’t matter how much you love him, he’s taking advantage of you. And he’s setting a bad example for your children. It interests me that you didn’t mention until the end that your husband’s from a Muslim country. In an ultra orthodox Jewish family, the husband might spend his entire day in prayer while the wife works. That’s part of an acceptable tradition. However, your husband neither works nor (I would hazard) spends his days in prayer. Your love for him must be growing very thin. You are run down, weary. While I’m sure it frightens you to stand up to this guy with his attitude of I’m-the-boss-just-because-I’m-male, you have no choice if you want to stay sane and healthy. So I suggest you pull yourself together and give him an ultimatum: contribute or get out. I’m sure friends and family will support you in this. In the end, if your husband continues with his BS excuses, do yourself and your children a favor and kick him out. His love for you is meaningless unless he puts it into action and gets a job. Nuff said. Good luck and stay in touch.

Here’s another one from Honed to Kill:

You’re a stupid ass, Knowles. What do you know about the deadliest compulsion of all? Nothing. Have you ever seen someone, perhaps a woman in a store, and known you had to possess that person? You look at the woman and know your mission in life is to capture her, love on her, hold and adore her. I really doubt you know anything about that.

You’re right, Honed, I don’t know anything about the deadliest compulsion. Why don’t you explain it to me? 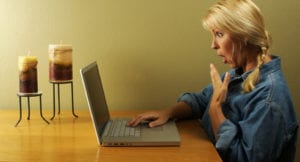 REACTIONS TO FREAKED OUT MAMA

Did it ever occur to you that maybe your son has the right idea? Why should he think just like you? The world is made up of all sorts of people and if he doesn’t agree with you, too bad. I say live and let live. He’s probably had liberal garbage stuffed down his throat his whole life and of course he’s going to react. My guess is you have to rethink your role as parents. So far it’s clear you’ve done a lousy job. Cheers to your son for exploring his own ideas!

I’m an Orthodox Jew and in my community we rarely have such difficulties. We observe dietary laws and Shabbat — two intertwined practices that hold families lovingly together. Our rabbis have answers that make sense. Children respect their parents and are much happier for it than those who rebel in other, less close-knit groups. Clear, cohesive guidelines are necessary for all individuals if they are to become contributing members of society with strong values and worthy goals. I am very sorry for you. Wishy washy liberal ideas are well meant but don’t give young people the real guidance and example they so badly need especially in these difficult times.

I say cut him off without a dime. I don’t necessarily agree with you namby pamby liberals, but if it were my son and I came from a history of persecution, I’d show him the door for lack of respect and treacherous thinking. Gotta be tough. On the other hand, whether you like it or not, your son may have the right idea regarding TOO MANY IMMIGRANTS in this country. Think upon it.