From the Editors 5 months ago

Vindman Fired for Telling the Truth

It’s a sad day for this country when a true patriot is fired for telling the truth about our corrupt president. Trump promised revenge. And so it begins… America descends down the path to dictatorship.

On Friday, LTC Vindman, who testified under subpoena during the House Impeachment inquiry, was escorted from the White House after having essentially been fired. He has been transferred back to the Defense Department, along with his twin brother, Yevgeny Vindman, a (now former) senior lawyer for the National Security Council, who didn’t participate in the impeachment hearings at all.

Vindman, a Purple Heart recipient, testified in October that he considered Trump’s “perfect” call with Ukraine president Volodymyr Zelensky inappropriate and flagged it for a top White House lawyer because Trump’s request to withhold aid undermined national security. Since that testimony Vindman has come under repeated attacks from the president’s allies and been under Army security due to receiving death threats from Trump’s cult supporters. 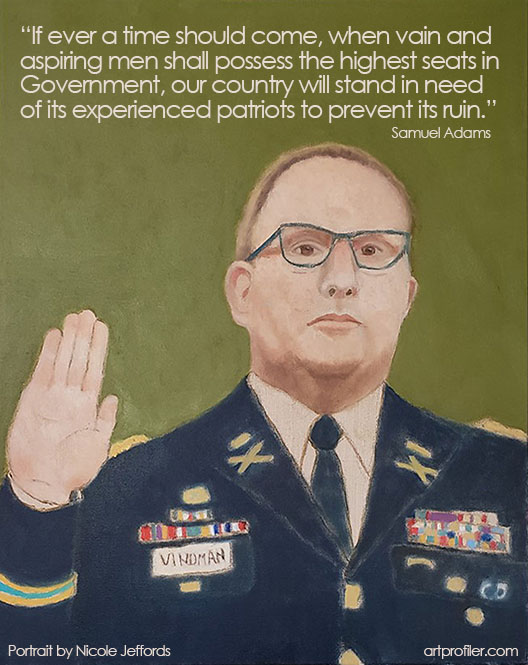 His firing, along with EU Ambassador Gordon Sondland’s, another key witness during the impeachment hearings who testified that “we followed the president’s orders,” came only two days after Trump was acquitted on charges of abuse of power and obstruction of Congress by brainwashed and scared Republican senators. On Saturday, Trump gave his first official response on Twitter: “Actually, I don’t know him, never spoke to him, or met him (I don’t believe!) but, he was very insubordinate, reported contents of my “perfect” calls incorrectly, &. was given a horrendous report by his superior, the man he reported to, who publicly stated that Vindman had problems with judgement, adhering to the chain of command and leaking information. In other words, “OUT.””

An adviser to Trump said the firings of the major impeachment witnesses was meant to send a message that siding against the President will not be tolerated. In other words, blind loyalty over truth under oath is what’s important to this administration.

But Vindman’s attorney, David Pressman, countered Trump accusing him of waging a campaign of intimidation against impeachment witnesses. He said, “There is no question in the mind of any American why this man’s job is over, why this country now has one less soldier serving it at the White House. LTC Vindman was asked to leave for telling the truth. His honor, his commitment to right, frightened the powerful.” He added, “Truth is not partisan. If we allow truthful voices to be silenced, if we ignore their warnings, eventually there will be no one left to warn us.”

Vindman was further backed by House Speaker Nancy Pelosi: “The shameful firing of Colonel Vindman was a clear and brazen act of retaliation that showcases the president’s fear of the truth. The president’s vindictiveness is precisely what led Republican Senators to be accomplices to his cover-up. The firing of this patriotic soldier is a sad and shameless loss for America’s security.”

Even retired Marine Crops Col. David Lapan, a former Pentagon spokesman and the vice president of communications at the Bipartisan Policy Center, got behind Vindman, saying he “absolutely” believed the ouster of Vindman and his brother was a retaliation from the White House.

When asked on the stand how he had overcome his fear of retaliation in order to testify, LTC Vindman testified, “Congressman, because this is America… and here, right matters.”

And right he is. As Samuel Adams once put it, “If ever a time should come, when vain and aspiring men shall possess the highest seats in Government, our country will stand in need of its experienced patriots to prevent its ruin.”

Trump MUST BE STOPPED.

Previous Article
Brain Injuries
Next Article
Coronavirus: Trump Plays Doctor with His Own Version of the Truth