At Big Medium through November 18

Steve Parker, an Austin-based artist and composer, has created a glorious multiverse of sound performances and interactive installations rooted in the history of conflict in WAR TUBA RECITAL. As the latest winner of the Tito’s Prize, Parker receives $15,000 cash prize and an exhibit during EAST studio tour at Big Medium. 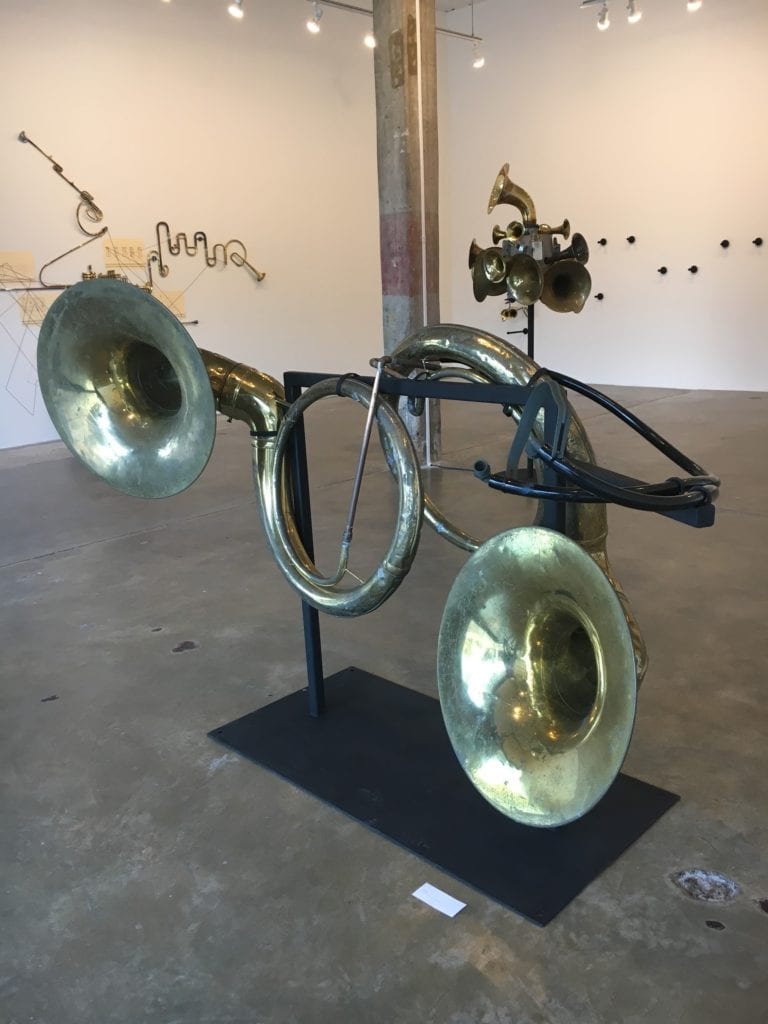 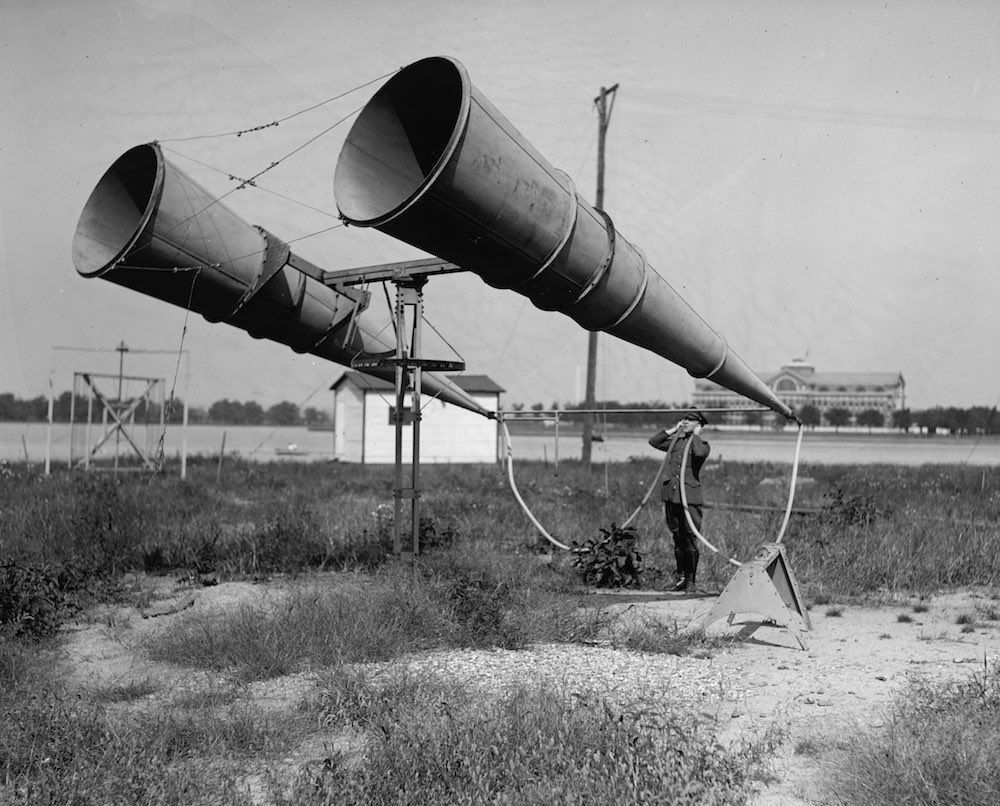 War Tubas at Bolling Air Field Base circa 1921 via Mashable

An installation of two brass tubas arranged at opposite ends on a steel bar sits at the entrance of the show with a pair of ad hoc earbuds attached. WAR TUBA emits a slew of gargled noises creating a random mash-up of sounds. The beeps of Morse Code and air raid sirens can be heard and intermingle with other anachronistic war-like noises producing an auditory tingle in one’s ear. Parker was inspired by an actual device of the same name used during the early 20th century as an acoustic locator. With hulking proportions and outmoded technology, the original war tubas appear as clownish relics today. They definitely served an important role in the war by detecting enemy aircraft; however, with the invention of radar they were rendered obsolete. 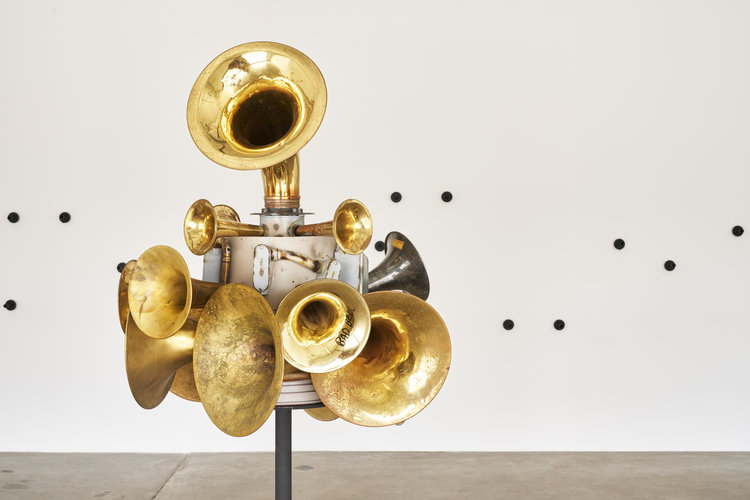 The siren is another type of wartime auditory device cleverly employed by Parker in his show. Sirens displays a shiny brass bouquet of loud speakers affixed to a steel pole. It is a miniaturized version of a siren tower commonly found on military bases that issues warning signals of approaching danger. However, Parker strips the device of its original purpose reconfiguring it to interspersedly play recordings of songs of distress. When I visited, “You Are My Sunshine” was playing and overlaid with an operatic voice singing a wistful tune. Walking around the sculpture one can hear disparate noises blending with the songs as the volume fluctuates to create a sonically mesmerizing scene. Parker is also alluding to the sirens of Greek mythology: hybrid mixtures, part bird, part woman that lured sailors to shipwreck on their islands with their bewitching music. Like the sailors, I fell prey to the beguiling sounds as I circled around the installation, putting my ear up against the work. 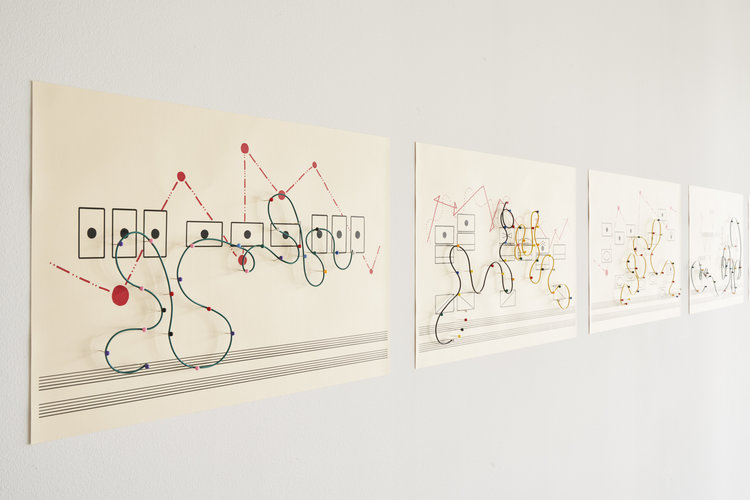 Parker takes us behind the sound with Ghost Army Scores, a series of works on paper that line one wall of the exhibition. These pieces are reimagined ideas of musical scores, but with a twist. Combining fragments of musical notation with tactical maps and symbols, Ghost Army Scores are reminiscent of a wacky playbook with looping and zig-zagging lines fashioned out of wire. The artist was influenced by the Ghost Army of WWII which was a military deception unit of the Allied Army that impersonated other Allied forces to deceive the enemy. 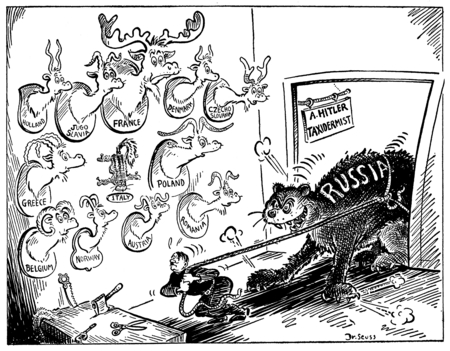 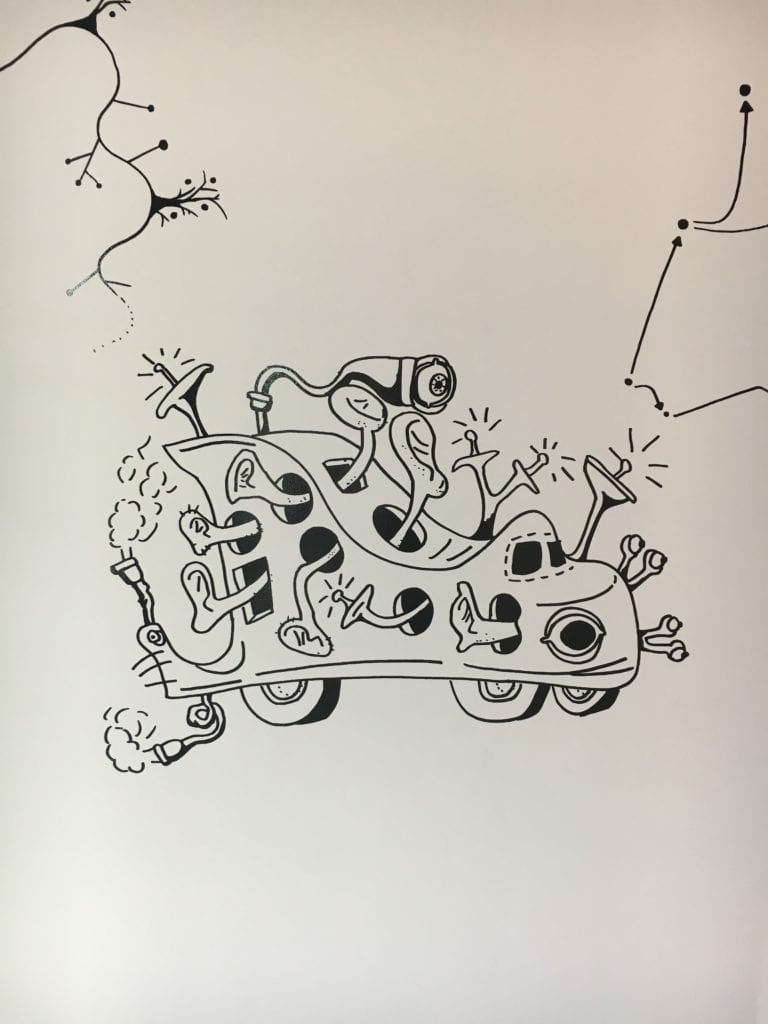 Parker delves further into the history of WWII with references to Dr. Seuss. A little known side to Dr. Seuss was that he was a prolific creator of wartime propaganda and controversial political cartoons during this period; his satirical cartoons lambasted both sides of the war though he was clearly on the side of the resistance. The curling lines and discordant symbols employed in Ghost Army Scores are further explored in Parker’s Seuss Scores, which are scattered around the gallery as vinyl cutouts on windows and walls. One illustration displays a wonkily shaped car riddled with holes like a hunk of Swiss cheese, but with ears and radars popping out of the holes as it putters along. These Seuss influenced drawings combined with Parker’s sound installations add levity and a childlike sensibility that is at once disarming and refreshing to the show.

Sound, like other senses, has the undeniable ability to transport, and Parker harnesses this energy within his work. In WAR TUBA RECITAL, he has orchestrated an exhibition that adeptly commingles the strident sounds of conflict with cleverly reconfigured instrument installations laced with historical narrative.

I recommend going to see this show before it closes on November 18. It’s right at the heart of the EAST Austin open studio tour, so you can combine your visit with checking out the many fine artists in their studios at Canopy, the huge complex of galleries and studios that includes a cafe and art school on Springdale Road.