If you’ve been wondering why Penn is afraid to disown its Most Prominent Alumnus, then you must see Where’s My Roy Cohn? 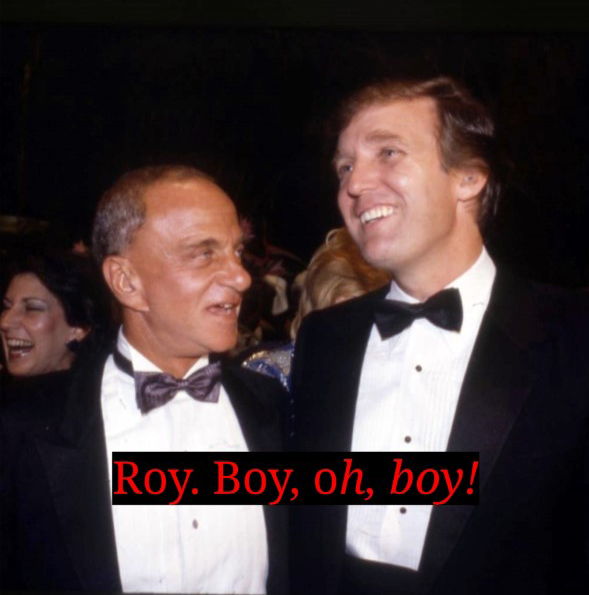 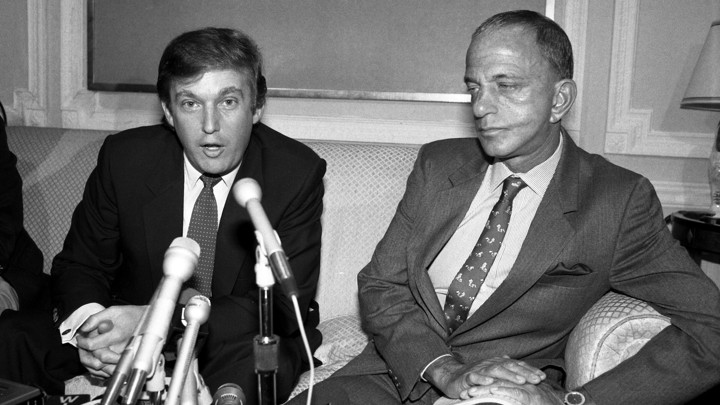 WASHINGTON—Even as Our Leader’s tweets left the country digging out from under a record number of misspelled words and dangling participles this weekend, the University of Pennsylvania’s president and Trustees continued to resist calls to investigate how Donald Trump managed to graduate from the University’s prestigious Wharton School with the vocabulary, spelling and writing skills of an inattentive 10th grade high school student.

While the circumstances surrounding Trump’s admission and graduation from Penn may seem unimportant, given the harm he’s caused the nation, the University’s decision to protect the President at all costs could easily tarnish its reputation beyond repair. Ironically, or perhaps fittingly, one of Penn’s more prominent alumnae has co-produced and taken a star turn in a fine new documentary film that examines where, when, and by whom, the University’s Most Prominent Alumnus was educated.

The film, of course, is Where’s My Roy Cohn?, which I saw Friday night at the E Street Cinema in Washington, just a few blocks from where the infamous Roy Cohn’s best student, and Penn’s gift to the nation, now resides and practices Cohn’s teachings each and every day—by breaking the law, unabashedly lying to the American people, offering foreign leaders deals they can’t refuse, and never saying he’s sorry or admitting he’s wrong.

Perhaps the film’s most instructive moments are Cohn’s last interviews with Larry King and Morley Safer, when he denies, to the bitter end, that he’s gay and dying of AIDS. It’s not the lies themselves but how he lies, with the sangfroid of the Mafia consigliere, hired gun and hypocrite he was, and taught The Donald how to become, that’s so telling and worth the price of admission.

Looking into the camera with pancake make-up hiding the dark rings under his eyes, he denies he’s ill by asking viewers, without the slightest blush, if he looks ill. Of course not, even as Nancy Reagan is making appointments for him at the National Institutes of Health and tout New York somehow knows he’s lying. It’s the ah-ha moment when you see how the cold-blooded chutzpah Cohn had—and instilled in his protege—has been far more useful to Trump over the years than whatever he did, or didn’t, learn at Penn.

The More Prominent Alumnae we have to thank for Where’s My Roy Cohn? is Marie Brenner, a long-time contributor to Vanity Fair and author, whose brother, Carl, was a fraternity brother of mine at Penn, and whose sorority sister, Claudia Cohen, was also a good friend of mine. We were all at Penn during or immediately after the two years, between 1966 and 1968, when Young Donnie Trump was occasionally in West Philadelphia preparing for his assault on American values and Our Way of Life. 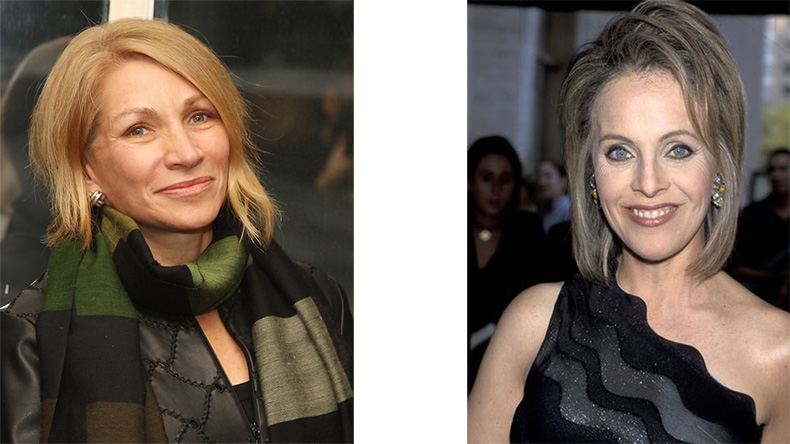 I didn’t know Marie all that well, maybe in part because most of the underclassmen in the fraternity were terrified of her older brother. So it seemed better to steer clear of her, too, which really wasn’t fair. But I did know Claudia, who got her start, as a journalist, that is, at The Daily Pennsylvanian, Penn’s student newspaper, in 1968; I was editor-in-chief when she was a freshman.

We continued to see each other while I was in graduate school at Princeton and remained friends after I went to work for The Washington Post in 1972 and she went to New York, where she became the no-nonsense and highly regarded editor of the New York Post’s Page Six gossip column in its heyday; had her own gossip column for awhile at The Daily News; did television gossip for Regis and Kelly; and later married and divorced Ron Perelman.

Those were the years, too, the 70’s and early 80s, when a handful of Wharton alums, a few years older than Claudia, Marie and me, became fabulously wealthy, Perelman and Trump among them. I met a couple of the Wharton billionaires when I served as Penn’s first Young Alumni Trustee between 1972 and 1975, and I suspect that was about the time Claudia first got to know The Donald.

Even though he might deny it now, I have no doubt they did know each other because when Claudia sadly died of ovarian cancer in 2007, no less an authoritative source than Jared Kushner’s Observer newspaper reported The Donald and Melania attended her funeral (along with almost everyone else in New York, it seems). 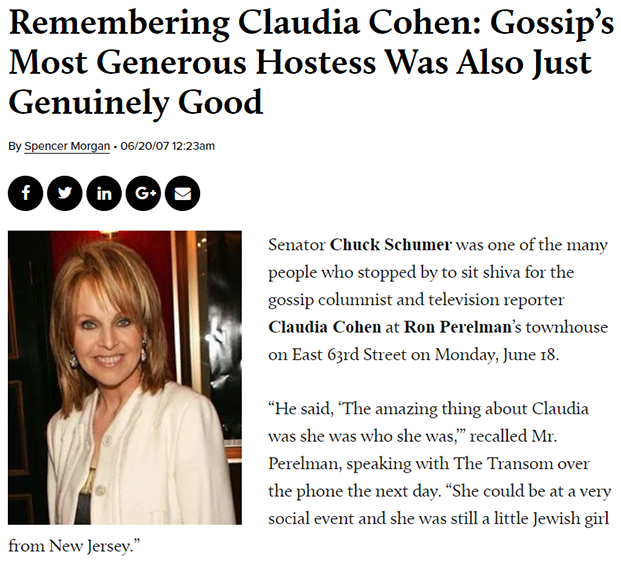 Why my acquaintance with Claudia and her acquaintance with The Donald in the 70s, when Cohn became his lawyer, teacher and link to the Mafia-controlled building trades unions in Manhattan, is important now, is this: it establishes the provenance of the information I forwarded to the president of the University of Pennsylvania, Amy Gutmann, last January, asking her to undertake an investigation that could lead to Donald Trump’s degree from Wharton being rescinded, exposing another lie in the chain of lies that has taken Donald Trump to the top.

Because I’m quite certain it was Claudia who told me, in 1979, when I was in New York to receive an award from the Overseas Press Club for Jonestown, that Donald Trump was admitted to Wharton as a transfer student in 1966 only because his older brother, Freddy, knew someone in the admissions office, who “arranged” for Young Donnie Trump to be admitted after he nearly flunked out of Fordham, where he spent his freshman and sophomore years.

There have also been persistent rumors, which I won’t attribute to Claudia, that, once he was admitted, The Donald paid some of his Wharton classmates to take the exams he needed to pass in order to receive his undergraduate degree from Wharton two years later.

If true, this would help explain how Our Very Stable Genius, who often cites his Wharton degree as proof of his intelligence and preparation for the job he now holds, managed to get into and out of Wharton without any evidence of the skills and knowledge he would have presumably needed to graduate.

I couldn’t help but think, as I watched Where’s My Roy Cohn? —its title being Our Leader’s oft-repeated lament when his woefully naive and uptight first attorney general, Jefferson Sessions, failed to protect him—that in William Barr, he finally found his Roy Cohen, the second time around.

Because Barr has proven to be more than willing to use Cohn’s playbook to try to obstruct and delay the impeachment investigation, using the courts against the Constitution to legally disrespect the rule of law and keep his client in office.

Is the Cohn playbook also why the University of Pennsylvania continues to refuse to investigate the circumstances that allowed its Most Prominent Alumnus to graduate with a Wharton degree? Is it afraid of the letter Michael Cohen told Congress he was instructed to send Penn during the 2016 campaign, warning its Most Prominent Alumnus would sue if his SAT scores or transcripts were ever made public?

Is that any reason for the University to join in the conspiracy to protect this President by hiding what they may reveal? 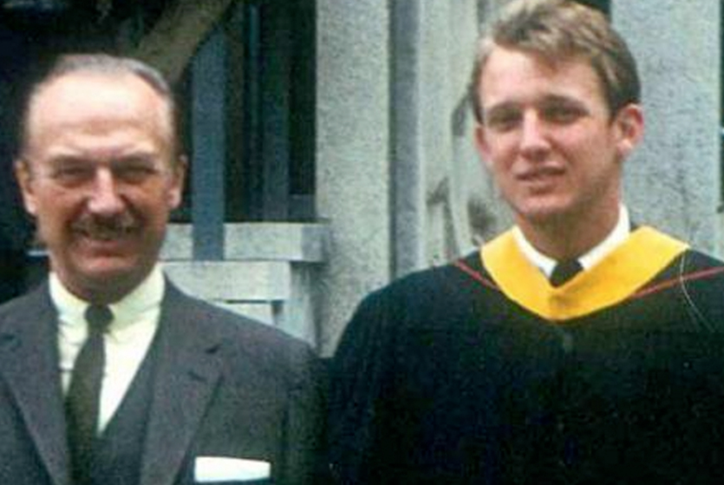 The Trumps, father and son, attend Donald’s graduation from Penn, 1968.

The University of Pennsylvania has a duty to protect its reputation and our degrees.

Since I first publicly released my letter to Penn’s president, Amy Gutmann, asking the University to investigate the circumstances that resulted in Donald Trump being admitted to, and graduating from, Wharton, I’ve been asked more than once what I wanted to happen and why.

First of all, it’s embarrassing for all of us, I think, that we have a barely literate President. Adding insult to injury for those of us who were at Penn during the years he was there, it degrades the value of our degrees because his every tweet suggests the minimum skill levels required to graduate were very low. 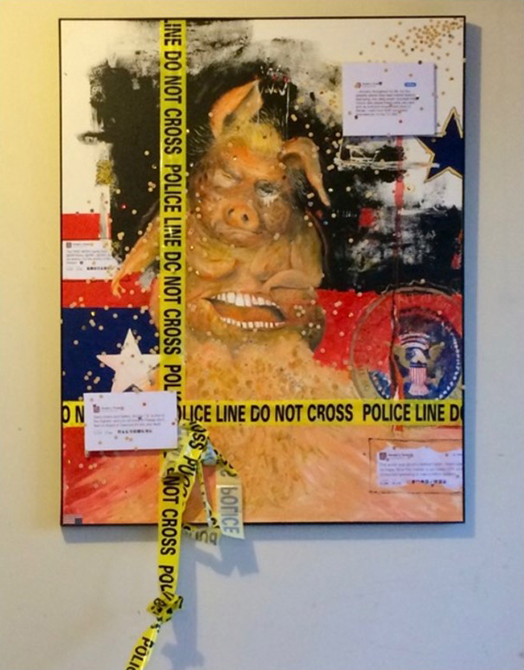 Clearly, Trump was admitted because a good friend of his older brother’s, Jim Nolan, who was recently interviewed by The Washington Post, worked in the admissions office and interviewed him as a favor to Freddy Trump. Nolan said he must have given The Donald a favorable rating or his candidacy wouldn’t have gone any further.

Nolan also acknowledged in The Post interview that Fred Trump Sr, who accompanied young Donald to the Philadelphia that day, tried to “ingratiate” himself with Nolan. But if the reporter asked what Nolan meant by that or whether Nolan accepted, the published interview doesn’t include the question or Nolan’s response.

Nolan made it seem as if any student with half a brain who wanted to study at Penn back then was admitted. That wasn’t true, especially for transfer students applying to Wharton’s undergraduate program.

And several people I’ve talked to have told me it would have been nearly impossible, even for a genius, to transfer into Wharton as a junior and graduate two years later, as Trump did, because Wharton had a core curriculum that it took the first two years to complete.

Then, there were a certain number of elective courses that were also required. Even if Trump had been given credit for every course he took at Fordham, where he studied his first two years, it’s highly unlikely they would have been enough to give him the credits he needed to graduate at the end of the two years he was there.

Maybe Trump was the genius he says he was and what he learned at Wharton was that he was smarter than most of the other students, as he’s said on more than one occasion. Or maybe he outsmarted the other students by using is connections to gain admission and his father’s money to buy his degree.

That’s what I object to and that’s what I think the University has a duty to investigate. And if it turns out that Trump’s SAT scores and grades from Fordham were not high enough to be admitted, or there’s evidence of cheating once he got there, then it would be appropriate for the University to rescind his degree.

Even at this late date, it would show Trump that lying and misrepresenting oneself can have consequences and that it’s not always possible to bluff your way in and buy your way out.

It would also be another episode in Trump’s deceitful life the American people could understand, chipping away another chunk of his base and reducing the chances of the armed rebellion he’s predicting if Cohn’s playbook doesn’t work this time and Congress actually impeaches and convicts him of the high crimes and misdemeanors he commits…every day. 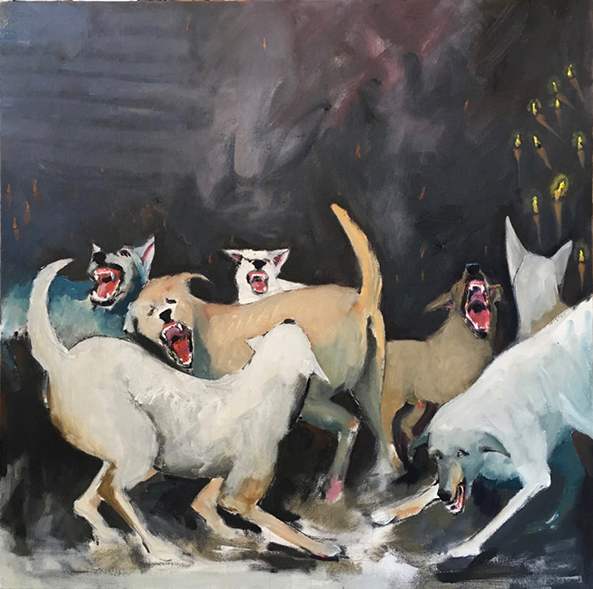 The Hounds of Charlottesville, Robert Cox (oil on canvas
30” x 30”)

Previous Article
His Crime is Treason
Next Article
Before Our Coup Runneth Over, A History Lesson