Who Will Save Us?

Who Will Save Us? 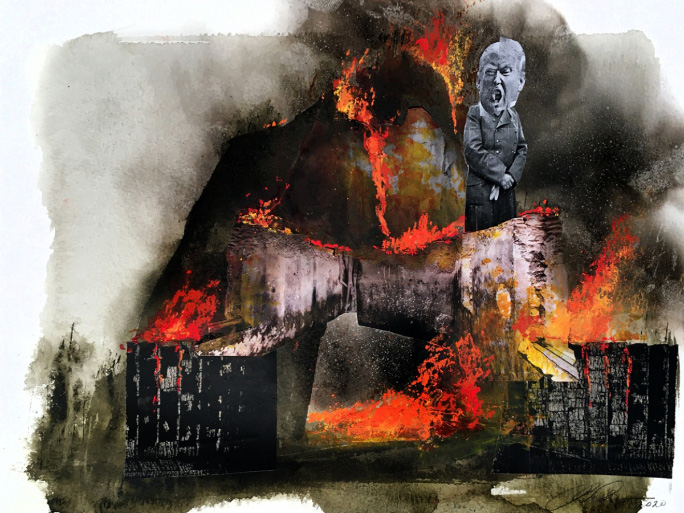 An artist’s image sums up our Dystopian Age

Published this weekend when wildfires are burning, our president is hiding the truth of his betrayal for all to see, the pandemic is raging, Dr. Fauci
will soon be leaving and it seems as if our society is crumbling
by CHARLES KRAUSE/REPORTING LLC

WHO WILL SAVE US?

When we accused Donald Trump of treason last weekend, we offered as circumstantial evidence the Department of Homeland Security’s failure to release an intelligence report detailing Russia’s cyber-warfare campaign to influence, and possibly disrupt, our November presidential and Congressional elections.

Mid-week, Brian Murphy, former head of Homeland Security’s Office of Intelligence and Analysis, filed a whistle-blower complaint suggesting Our Leader’s betrayal was even more complete than we had suspected.

According to The Washington Post, Murphy said “that on two occasions he was told to stand down on reporting about the Russian threat and alleged that senior officials told him to modify other intelligence reports, including about white supremacists, to bring them in line with President Trump’s public comments.”

The president, of course, has maintained the Russians did nothing in 2016, and are doing nothing now, to influence the election in his favor, despite consistent U.S. counter-intelligence reports to the contrary. The “badly written” July report we cited last week, intended to warn state election officials of potential threats to their computerized election machinery, had still not been released as of this weekend.

We’d be willing to bet that, by now, the Russians know a lot more about what’s in that report than our state election officials do. And we wouldn’t be surprised if they’d made some changes to the ones our side has detected.

Also last week, former intelligence officials revealed the Obama administration had reason to believe the Russians had developed additional measures to affect the outcome of the 2016 election, which they hadn’t used. The consensus was they were holding them in reserve for this year.

The Swamp believes those measures may be related to 2016 reports the Russians had successfully hacked the computer systems of several states, including Arizona and Illinois, giving them them the capability to manipulate the outcome of the results.

Rudy Giuliani was also in the news again last week when the U.S. Treasury Department sanctioned a member of the Ukrainian parliament for his efforts to interfere in this year’s U.S. election. The parliamentarian, with whom Giuliani met several times in Kiev last year and from whom Giuliani received information intended to smear Biden, was described by a Treasury Department communique as “an active Russian agent for over a decade.”

There was also a report on foreign interference in this year’s election from Microsoft that seems to have been deliberately misinterpreted by Murphy’s successor at DHS. Microsoft said the Iranians and Chinese were also trying to influence the election’s outcome, though not necessarily by spreading false information, and that the Russians had hacked, or attempted to hack, computer systems belonging to both the Democratic and Republican state and national committees, clearly a feint by the Russians meant to suggest their efforts were nonpartisan rather than pro-Trump.

On Friday, Mary Trump repeated her plea, during an interview with MSNBC’s Ari Melber that’s worth watching if you missed it, asking Americans to think “very carefully” about their vote because her “very sick” uncle “is never going to get better.”

“If it suits his purposes,” she warned, “he will take this country down with him.”

Whether all of our votes will be counted as intended is uncertain. The Russians and Republicans are thought to have the capability of changing the outcome in certain key Congressional districts and possibly in several states.

What they may not be able to do is counteract a massive vote, overwhelmingly in favor of one candidate, or the other.

This weekend, THE CENTER FOR CONTEMPORARY POLITICAL ART and its partner, MILLENNIUM ART SALON, issued a Call for Art for nine issue-oriented, visually striking, get-out-the-vote posters. We will display them in Washington and online beginning October 9th.

The wording for the posters is non-partisan, mentioning neither the parties nor candidates, reminding those who see them that in a democracy “U DECIDE” and urging them  to “VOTE NOVEMBER 3rd.” 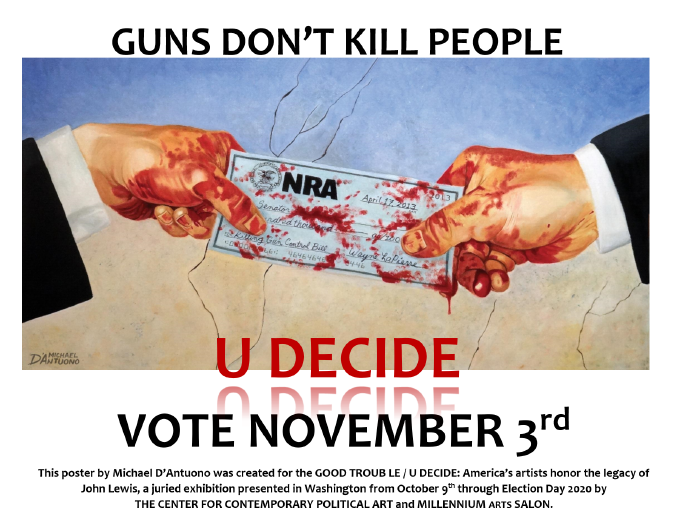 John Lewis was a Democrat, yes. But if you believe in the principle enshrined in the Voting Rights Act of 1965, that every American citizen of voting age has the right to register and vote, regardless of race, religion, sexual orientation or any other impediment, including poll taxes and poverty, then John Lewis nearly gave his life for a cause that benefits all of us.

We don’t pretend our posters will change the course of history or save the country from the wildfires, pandemic, Russians, centuries of racism or the filthy swamp we’re drowning in, here in Washington. But we’d like to think that if We the People, all of us, do something to reclaim our destiny by voting on November 3rd, somehow…We will prevail.

GO TO www.politicsartus.org/good-trouble if you’re an artist who wants to create a get-out-the-vote poster.
CONTACT US at GOODTROUBLE@politicsartus.org  if you’re a citizen who’d like to help off-set the cost of printing and distributing the posters.

SCROLL DOWN to see the Open Call; why we think Dr. Fauci is about to be fired; our take on the campaign so far, including the impact of Bob Woodward’s tapes and The Atlantic‘s report on the President’s disdain for the “suckers” and “losers” who fought and died in World Wars I and II. 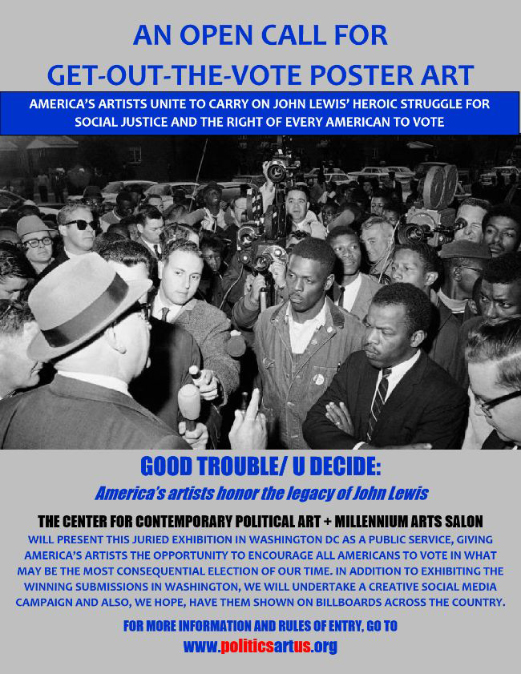 WASHINGTON—It wasn’t an ambush interview by an ambitious reporter looking for roadkill.

Nor was the interviewee a newcomer to the rodeo.

Andrea Mitchell was in good form Friday and knew what to ask. Maybe she even knew what he wanted her to ask.

More importantly, it sounded like Anthony Fauci knew what he wanted to say.

Which was, in effect, that he was appalled by Trump’s deliberate and ongoing lies, and that he, Fauci, wasn’t going to be polite any longer.

In fact, it sounded like he was daring Trump to fire him.

And that’s exactly what we should expect Trump will do. Sooner, rather later.

But what will the rest of us do?

Without Fauci, who’s left to believe?

Who’s going to save us?

We’re only halfway through the pandemic. And, according to what Fauci told Mitchell yesterday, the worst is probably yet to come.

Who’s going to save us?

THIS WEEK ON THE CAMPAIGN TRAIL

WILL TRUMP’S OUT-OF-CONTROL NARCISSISM SET BACK
THE CAUSE OF WHITE SUPREMACY?

I must admit I hadn’t realized how important a figure in the civil rights movement, and in American history,  John Lewis was until he died of natural causes in Atlanta two months ago, seven weeks after George Floyd died of unnatural causes in Minneapolis.

The deaths of those men are shaping this political year, even more than the pandemic, because Trump has managed to turn the election into a referendum on his Nativist white supremacy sympathies; promises to wipe out the “violent anarchists” he sees leading peaceful protests everywhere; new commitment to law and order for everyone but himself, his family and cronies; and support for our armed forces (versus the pacifists running on the Democratic ticket).

The latter, however, has become something of a double-edged sword, so to speak, since mid-week, when The Atlantic published Jeffrey Goldberg’s bombshell of an article, quoting Our Leader’s disregard for the “suckers” and “losers” who fought and died in World Wars I and II.

Biden and Harris, meanwhile, are trying to re-focus attention on what we now know, thanks to Bob Woodward’s tapes, were Trump’s deliberate lies about the coronavirus pandemic, when it still could have been contained last February.

Sang froid doesn’t even begin to describe what Our Leader did when, one cold winter day seven months ago, he told Woodward he knew the virus was contagious and much more deadly than the flu; then, two or three days later, turned around and told the American people the opposite of what he knew to be true. That is, he told us— not to worry, the virus was under control; it wouldn’t spread; and would magically disappear all by itself, in time for everyone to go to church on Easter Sunday.

Sang froid may describe Trump’s demeanor when dealing with the Russians, right under the noses of the “dark state.” But it’s a far-too-elegant term for the cold-blooded murder of the 190,000 Americans who’ve so far died because Donald Trump wasn’t prepared to see the stock market head south and unemployment head north, jeopardizing his chances for reelection. 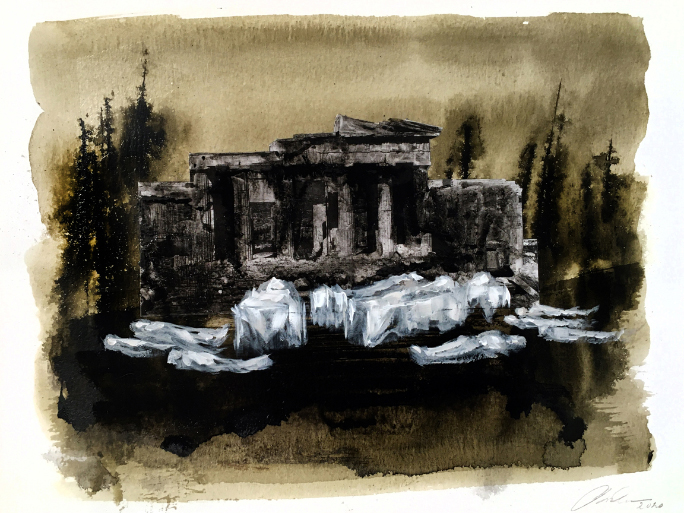 Crypt by Jim Boden; collage created the day the number of COVID-19 deaths reached 100,000 in the U.S.

Should we be surprised to learn that he refused to put the lives of a couple of hundred thousand losers ahead of his own hunger for power and need to remain president to repay the debt he owes the Russians?

It’s still a powerful issue and Woodward’s tapes place responsibility for many of the deaths right where it belongs.

At the same time, I think Biden and Harris could make more of their opponent’s obvious efforts to ignite civil unrest in Black ghettos across the country and then try to scare undecided voters into believing Biden and Harris won’t do anything to stop it.

I think many decent white Americans are disgusted by Trump’s winking at the supremacist militias and his praise for cops who haven’t-as-yet-murdered an unarmed Black man, as maligned pillars of society.

They now realize institutional racism afflicts probably all of our state and local police departments and are deeply troubled by the pattern of abuse George Floyd’s murder has made them aware of. At the same time, they were deeply moved by what they learned about John Lewis’s life of bravery and sacrifice, and his belief in our system of representative democracy, after he died.

Trump’s absence from Lewis’s funeral and failure to even acknowledge Jacob Blake’s family or his suffering, when he visited Kenosha, confirmed for many Americans that their current president is a racist bigot, unworthy, for that reason alone, of the office he currently holds.

Biden and Harris should not, in my opinion, be afraid to use the words, “racist bigot,” or similar, to describe him. He is what he is, to paraphrase the words he used to describe the Americans who’ve died of COVID-19, because he didn’t think what he could have done to save them would be good for him.

It’s impossible to see how Trump could win a free and fair election, given that he’s alienated virtually every constituency that might have voted for him except for, perhaps, the Mitch McConnell Republicans, who haven’t a shred of human decency—and, one suspects, bad breath to boot—and his base, the white lumpen proletariat, who have a right to be angry, but still haven’t figured out that Trump’s racism will take them only so far.

He may be a good ‘ole boy, of sorts, in their view. And, they may enjoy watching the bully in the china shop.

But even they may come to see Trump’s raging Narcissism is out of control.