The World of Franyo, Part 1: A Jewish Girl from Hamburg

I know only these few facts about my mother’s childhood: she was born in Hamburg, Germany, shortly before WWI (she lied about her age, advising me to do the same by as much as ten years). Her name at birth was Marga Victoria Horwitz, though she changed her first name to  Franyo (her nickname in art school), and her surname to Herridge, probably because of antisemitism. Her father, Sigmund, was in the insurance business and died of tuberculosis when my mother was five. All she remembered of him was he was very tall and bought her ice cream cones. Her mother, Alma, an opera singer, was Sigmund’s second wife. His first marriage had ended in divorce and, no doubt, scandal since there were three kids involved, and two of those kids remained with Sigmund, while the third, rumored to be very difficult, stayed with her mom. (Another rumor has it that this child, Bea, died of an abortion.) I don’t know if Alma broke up the marriage. She was a sweet old lady when I met her, so it’s hard to imagine her engaging in any kind of questionable behavior. What I do know is she had a career, a busy social life, and she had my mother late – around forty. 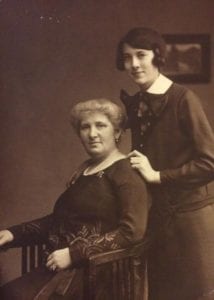 About Franyo’s schooling and childhood I know next to nothing. She had a great love for Hamburg, the canals, misty fog, many ships and bridges. The way she spoke, no city could ever equal it in atmosphere and beauty. But she was a Jewish girl. There was no way to escape that fact, and dark times were coming.

Next Article
The World of Franyo, Part 2: Crimes Worse than Murder