The World of Franyo, Part 35: Let’s Get Out of Here

The purpose of our trip to Morocco was to continue work on Werner’s book, “Cities of a Thousand and One Nights,” (which I was supposed to be writing). So far I had done nothing, zero, zilch. I had a very loose agreement with the publisher: Come up with a decent sample chapter and synopsis, and we’ll sign you on. I knew the photos for such a book were more important than the text, and who reads that dry, boring stuff anyway? I really didn’t know where to begin. Perhaps Morocco, with its fantastic bazaars, medinas and kasbahs, would inspire me.

I bought a djellaba within the first few days of our arrival and began to pose as a Muslim woman for some of the photos as I had in Iran the year before. Again this elicited trouble. People would come up and yell at me – What was I doing with a European man? I should be ashamed! – and I’d just smile benignly and tell them in English that I didn’t understand what they were saying.

We drove all over the country, down the Atlantic coast, through the desert, up into the mountains. Werner took hundreds of amazing photos. I took copious notes, still looking for inspiration and coming up with nothing but images that collided and went nowhere in my head. 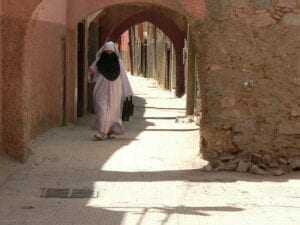 When we reached Marrakech Werner’s main goal was to find an important fountain he’d read about. The holy grail of fountains. For this purpose we hired a guide, which was unusual for us, a thickset, somewhat sluggish man named Ahmed who took us to every fountain in his repertoire. None was right. We broke for lunch and Ahmed suggested we go to a town up in the mountains that had the sort of architecture we were looking for. He would accompany us. It was about an hour’s drive.

Ahmed’s English wasn’t terribly good and his French wasn’t much better. We went back to the hotel for warmer clothing, grabbed a bite to eat and set out – Ahmed in the front seat so he could give Werner directions. What a drive! We started on a normal asphalt road ascending into the Atlas Mountains, took a cut-off onto a muddy dirt road that continued climbing but grew narrower and narrower until, many miles later, it dwindled into nothing more than a path. We were in the middle of nowhere, getting a little anxious. What was this place? Ahmed told us that he was a nephew of the Glaoui, Chieftain of the Atlas Mountains, whose kasbah was a little further on. As if on cue, a group of men arrived with a string of mules. 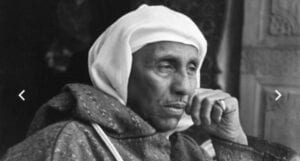 Werner had never before ridden a horse – no less a mule – and was uncomfortable with the whole situation. There was that long, muddy, primitive road to negotiate back to the asphalt main road and we were already well past mid-afternoon. Ahead of us lay a wide, rock-strewn, active stream that had over-flowed its banks and was filled with boiling twists and eddies. And beyond that, etched into the mountains like a vision in a dream, was the village Ahmed had been talking about. Werner clung to his mule with determination, teeth gritted, cameras close to his chest. I’d ridden horses all my life and was none too sanguine myself about fording that wild, racing stream. And where had the guys with the mules suddenly appeared from? I posed this question to Ahmed and did not receive a satisfactory response. But then, he didn’t look too comfortable on his mule either. 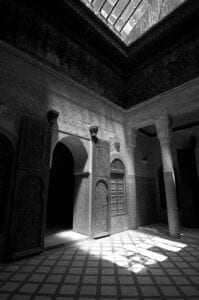 Somehow we got across the stream and began to climb a zigzagging stairway of rocks to the village above. It was one of the most majestic sights I’d ever seen. Even the muleteers were silent as the waning sun slanted down on the kasbah walls, turning everything pink and rose gold. At the top of the rock stairway, just inside the entrance to the kasbah, a man appeared, waving us forward, welcoming us. “Hello! Hello!” he cried, his voice overpowered by the clattering of the mules’ hooves. “Bienvenue à…” but I didn’t catch the village’s name, though now, thanks to Google, I know it was Telouet. As we dismounted, the man told us he, too, was related to the Glaoui – would we like to have a glass of tea before he showed us around?

It was clear we didn’t have much of a choice. We followed him into a low-ceilinged house and up some stairs into the main living area. There, arched Moroccan windows looked out over the valley we had just traversed on muleback. Intricately woven carpets lay scattered on the floors and low slung, cushiony couches beckoned one to lie down beneath the windows. Tall glasses of iced tea were brought in. I noticed Werner’s looked different from mine – more mint leaves, more sugar. As he happily sipped at it, our host suggested we spend the night. “In fact, I insist,” he said, widening his arms in a gesture that meant mi casa, su casa. “We will have a beautiful dinner and you will relax, have a nice time.” By now Werner had finished his tea and was playing with his cameras, adjusting lenses and figuring out angles to shoot from. “Yes, we should stay,” Ahmed chimed in. And to me, in a low voice, he added: “You should accept his hospitality, Madam. It is a rare gift.” 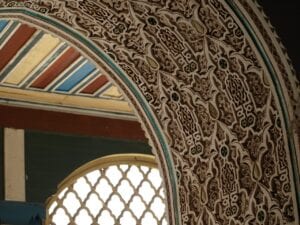 I certainly didn’t want to stay, and neither did Werner. He’d brought the wrong lenses with him. His preference was to spend the night in Marrakesh and return the next day with more camera equipment. Not pleased with this, our host began to argue in a sugary, obsequious way that set off warning bells somewhere in my brain. Suddenly it seemed there were more men in the room than a few minutes ago – and no women. Werner’s mood had changed. He was very obsessed with getting down the mountain before dark, but there was a slowness and uncertainty to his movements that I’d never seen before. “Let’s get out of here,” he said in a dreamy but determined voice, grabbing for my arm.