The World of Franyo, Part 36: Moonlight on My Skin 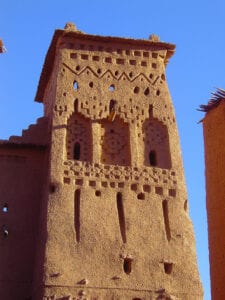 Our host smiled creepily and tried to stop us as we moved toward the door, but Werner tapped at his watch and said we had to go: We had dinner plans in Marrakech. A tight knot of anxiety formed in my stomach. It seemed a long way from the house we were in to the entrance of the kasbah where the mules awaited us. At least I hoped they awaited us. By now dusk had fallen. Werner had me by the hand as he strode calmly and purposefully down the steps. “We’ll come back tomorrow!” he called out in English to our now sullen-faced host. 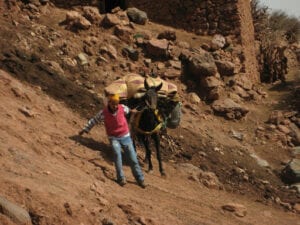 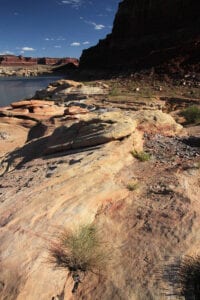 Ahmed, our guide, followed us out. I didn’t dare look back, just kept moving. Beside me, Werner showed no signs of distress or anxiety. In fact, weirdly, he seemed to be enjoying himself. The mules were still there and we mounted quickly and started back down the rock-hewn stairway to the roiling stream below. This was the scary part. It was already quite dark and I glanced over at Werner, expecting him to be frantically safeguarding his cameras as he clung to the mule’s neck, but instead he was sitting atop that thing with the ease of a practiced horseman. “I love this!” he called out happily. “I can feel the moonlight on my skin!”

Moonlight on his skin? Uh oh. The mules were having a difficult time gaining purchase on the slippery rocks of the stream. I remembered the weird glass of iced tea Werner been served. He had to be drugged. My heart was in my mouth as we wound our way through the racing water. I was short of breath, a complete wreck. But when we made it to the other side, where our car was, Werner announced that this had been one of the best experiences of his life. 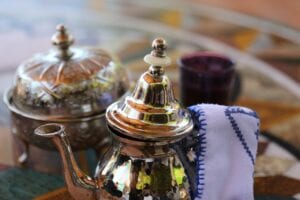 The drive back was treacherous. At the wheel, Werner relished every minute of it. We hadn’t gone terribly far when he decided to get out of the car and play with his cameras. We were at a hairpin turn and he wanted to see how the view looked, even though there was next to no light. Ahmed chose that moment to get in the back seat and kiss me. What!? “Stop that!” I yelled, shoving him off. “What do you think you’re doing?”

“Your husband is too old for you,” he said.

“And you’re too ugly,” I wanted to respond. Instead I pushed the door open and shoved him out.

Werner climbed back in the car, unaware anything had happened, and continued his blissful drive. He was so indebted to Ahmed for having taken us to the high mountain village of Telouet that he wanted to invite him to dinner and give him a big tip, but I nixed that. “We need to be alone,” I insisted. 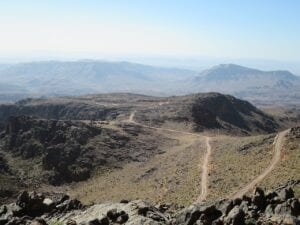 We went to a restaurant near our hotel. Werner couldn’t stop talking about Telouet – how beautiful it was, how perfect the kasbah with its magnificent vistas would be for our book, “Cities of a Thousand and One Nights.” He couldn’t wait to go back the next day. I wasn’t so sure given the dangers that had nearly befallen us. The strange iced tea, the ogling men, the racing waters of the stream, the steep muddy dirt road with its hairpin turns. It was good to be in a comfortable place, about to put food in our bellies. Werner still had that beatific look on his face. Our waiter brought us wine and he took a sip. I, meanwhile, quaffed down half the glass, enjoying the warmth of it spreading through my system. When I looked back at Werner a moment later, his face had turned bile green and his head was jutting forward from his neck at an odd angle as if it were about to snap off. I could see his eyes had rolled back in his skull. Was he having a stroke? I screamed for help as, in slow motion, he slid to the floor, looking for all purposes as if he were dead.