I had willed Jofka’s birth three weeks early, and my body rapidly switched gears as if it were a plane getting ready for an emergency landing. I could literally feel the shriek of cells, the start of openings, the crazy beginning of that descent. Oh my god, what had I done? In the mirror my face was stark white. 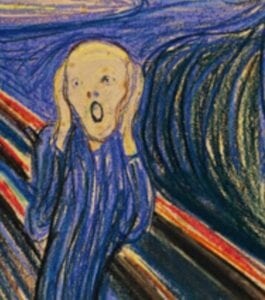 But then things seemed to even out. I had a full night’s sleep and woke refreshed and normal. I figured I’d played a trick on myself until a few hours later when I was attempting a nap on the couch. Suddenly the flat seemed eerily quiet. I glanced up. We had a very spoiled female cat and were looking after Celia’s female dog. The two animals did not get along and avoided one another, but there they were, sitting side-by-side, staring at me out of eyes as large as saucers. In that moment I knew. I stood up and water started trickling out.

At that time births were very different. You lost a little water, they wanted you at the hospital immediately. They wouldn’t even let me wait for Werner, who was running errands; they sent an ambulance to get me. As I entered the maternity home, a very pregnant girl came out and rolled her eyes at me. “Good luck,” she said. “I’ve been here three days and finally persuaded them to let me out. False labor.”

Ew. Other than a little water loss, I had no symptoms. They put me to bed. There were only two of us on the ward, a woman expecting twins and me. I woke around three AM in pain. By six AM the ward was full.

What I remember mainly was kicking my feet with each contraction. Up and down the ward, women were kicking their feet. The woman next to me, an orthodox Jew, was wearing a wig and looked more pulled together than the rest of us. It was Maundy Thursday and Passover at once… so holidays, and things were a little crazy. Werner came to visit me and announced that what I was going through was normal, but he had a stomach ache and might be seriously ill. After that everything kind of shut down and grew hazy (plus they gave me pain meds). All I knew was I wanted an immediate caesarian to put me out of my misery. 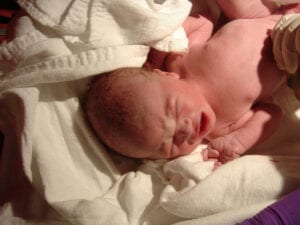 Jofka was born at six-thirty PM, easy peezy, sixteen hours of labor, not terrible once the urge to push set in. They allowed Werner into the delivery room to see her. She lay on her stomach, head lifted, looking slowly around her at this strange new world, perfect despite arriving three weeks early. Werner circled the crib equally slowly, as if he were studying an art piece, his eyes as large and wary as our cat’s had been the afternoon before. 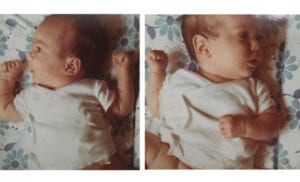