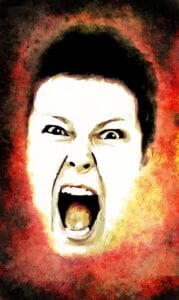 It was one of those situations where time slows to a crawl, each second freeze-framed. Cornelia was in my room. Her hand was raised in the air, wielding a knife. Her face was clenched and very focused – a mask of insane fury. I knew that what she was seeing was not me, but a projection of all her fears, worries and delusions. I also knew I had to get out of there fast. My desk was in the middle of the room, an obstacle between me and Cornelia. I grabbed my typewriter, keys and handbag. Jofka was still at daycare. Cornelia was muttering words that made no sense. She was staring at me out of eyes that were not registering reality, a crazy person’s eyes. I held my typewriter up like a shield and began to move around the desk. I could feel the sweat pouring off my skin. My heart was in my throat, beating loud as a clock, hard and unevenly. I inched around her toward the door, anticipating that knife slashing into me like something out of the movies. And then suddenly her ex-husband was there behind her, along with another relative, grabbing her by the shoulders, sweet talking her. 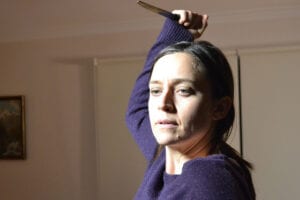 I don’t know what happened to Cornelia after that. Her daughter went to California with her ex. I believe Cornelia stayed on in the house for awhile. Jofka and I moved in with a friend for a few days while we looked for a place of our own. Funny how one can live in such close quarters and share so much with someone, and then the world shifts by just a few degrees, the bonds loosen and snap, and one never sees or hears of that person again. I remained in Cambridge for another three years, moving into an apartment not far from Fayerweather Street, developing a whole new life and set of friends. Cornelia became a ghost of the past. But we have Facebook and Google now, right? When I looked up Patsy for this story, I saw that she was a lecturer at a very decent college, had written a few books and married a prominent man. When I looked for Cornelia, her obituary popped up. She died in California in 1994. She was in her early fifties. Despite all that happened and the many years that had passed, I mourned her loss and the struggling young women we both had been in those dark, long-ago times.

The apartment Jofka and I moved into was a dream come true. It was on the first floor of an old Cambridge house, two bedrooms, big living room and kitchen, tiny study, and a back stairway that led down to a derelict yard. The landlady lived on the ground floor, a hardworking woman named Mary who’d grown up in the house, never married, and was in her mid-seventies. She had a heavy New England accent, pronounced “dark” as “dawk,” and, while not the sharpest blade in the drawer, was a lot cannier than I thought she was. We shared a front porch and Mary was often out there at the end of the day, surveying the mysterious comings and goings of the street. It was the first place I’d ever had on my own, the rent was cheap and there was ample room. I was to learn quickly, however, that there was no such thing as privacy on that narrow, tree-lined street with its close-set houses and extremely nosy neighbors. 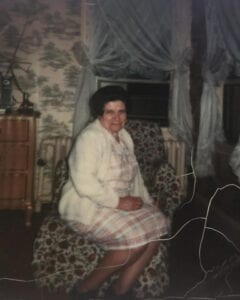