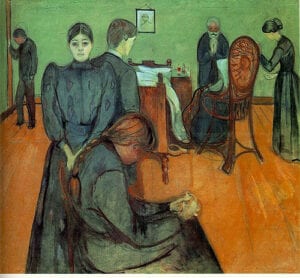 I remember my mother’s half-brother, Waldo, as a tall, skinny, humorless man in the kind of thick-lensed glasses that made his eyes swim around like pale helpless fish in a bowl. I had very little contact with him growing up. He was twenty years older than Franyo, so very old to me, and when I did see him, he always asked the same two questions: 1) “Do you know who I am?” 2) “How is your Latin?” Questions that comprised the sum total of our relationship… that is, until the very end. 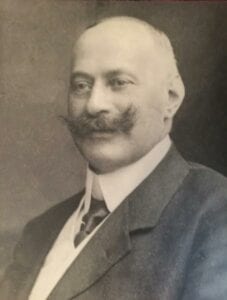 He lived in Queens with his wife, my aunt Alice, whom I saw frequently because she was my pediatrician and whom I adored. The story I was told went like this: as a young man Waldo was sent from Germany to Japan where he had a business opportunity. He remained there for the next ten years, had an affair with a Japanese woman who bore him a daughter, and then, perhaps because times were changing or because his job went sour or because the fact of his daughter had to remain so hidden, returned to Germany, somewhat defeated. On the trip home, however, he met his wife-to-be Alice, so there was reason to rejoice and not all was lost. The couple never had children of their own. The Japanese daughter remained in the country of her birth, veiled in secrecy, while Waldo emigrated to the United States with his new bride. From there, as Hitler gained power, he was able to obtain visas to the States for a number of friends and family. It remains a joke with me and my cousins that three generations of Waldo’s tall, large-nosed descendants could now be running around Japan, clueless about their origins and their awkward German Jewish great grandfather. 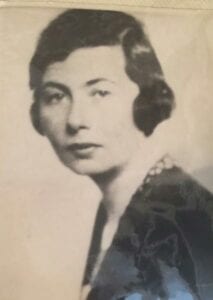 Although Franyo was able to leave Germany with Waldo’s help in 1938, she never had a kind word to say about him. It seems he had a bad temper and was not liked by many people. He lived into his early nineties, a crotchety beanstalk of a man who worked in the insurance business and whom I barely knew… until the very end when I had a deathbed experience with him. I was still temporarily living with my parents. It was a cold, grey November day and my mother asked if I’d like to go to Loehmann’s with her for some clothes shopping. I was hungover and not too into it. “Or we could visit Waldo in the hospital,” she suggested, unenthusiastically. I could see from her face that this was not the option she favored. Waldo had been in a small private hospital on the upper east for the past few weeks, apparently on the brink of dying. “I think we should go see him,” I said. 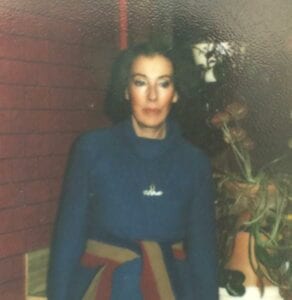 So off we schlepped to Gracie Square Hospital on 76th Street. The door to Waldo’s room was open. He lay on the bed, so tall that his feet – which pointed to heaven – extended over the edge. His eyes, without glasses, looked wide and alarmed. Intermittently he would open his ancient mouth and bellow, “Hallo!!! Hallo!!!” My mother stood in the doorway and refused to budge. She wouldn’t take off her coat. She wouldn’t enter the room. Her face wore a childish, sucked-in look of petulance as if she were being asked to perform an odious chore, like wash every single pot and pan in the kitchen. “Go and sit with him,” I said quietly.

“No!” she snapped. “I don’t like him. I never did. He’s…” And she began in a low hissing voice to list all his faults, most of them boiling down to he was a mean old shit who never had a single nice thing to say to her or anyone else. 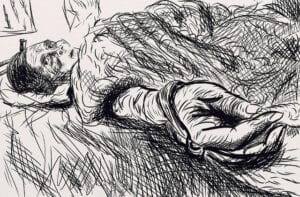 “Well, all right then,” I said, taking off my own coat and going to sit by Waldo’s bed.

Close up, his face was wizened, already pale and ghostly. The upper part of his long body was slightly raised against a bank of pillows and I could see he was looking at someone, but whoever it was, wasn’t in the room. Gingerly, I reached out and touched his arm. No reaction. He was unaware I was there next to him, his focus entirely fixed on that invisible being only he could see. I wondered if it was Alice, who had died of cancer six months earlier. She had passed with her wits intact. Waldo, who suffered from dementia, had been living in his own separate universe for a number of years now. I got up and began to rub his long spiny feet, first one, then the other. With each little squeeze, his foot would push back against my hand, wanting more. All the while he shouted, “Hallo! Hallo!” with what seemed like increasing anxiety. A nurse came in to check on him, smiling as if he were her favorite patient, tickling his chin, tucking his sheets in a little tighter. “He’s so cute!” she exclaimed. “We all just love him.” Franyo still stood in the doorway, her face stony with old grudges and anger.

“Does he always shout hello like that?” I asked. His voice could be heard all over the ward.

“Just the past day or two.”

“He’s calling to a specific person, isn’t he?”

She nodded. “That’s what a lot of them do when their time approaches.” 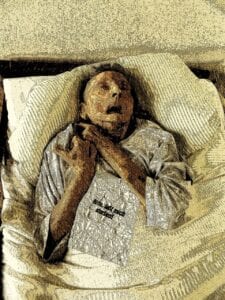 So he was shouting out to Alice. Or maybe the Japanese lady. Or maybe his parents. There was something about him – that insistent, imploring voice – that seemed like a child desperate to get home, only in this case home was a place none of us knew about, except for Waldo who was catching a glimpse of it.

And maybe, in an eerie way, Franyo who kept her eyes averted, shifting from foot to foot, anxious to get the hell out of there. 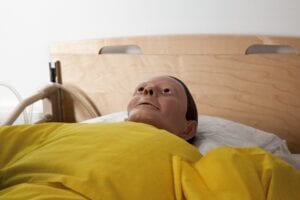 I continued to rub Waldo’s feet for a few minutes. Then I put on my coat and joined Franyo in the doorway. He died that night without her ever having said goodbye.