The World of Franyo, Part 86: Abandoned 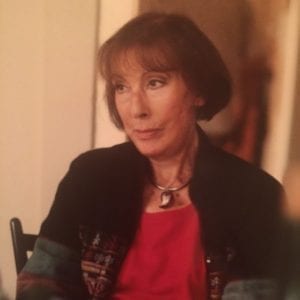 When I think of Harold Ganz and what he did to my mother, I feel a cold quiet fury that is mostly directed at myself. Writing about this period of Franyo’s life, I am shocked by how little the family protected her from predators. In fact, by how little we protected her at all. She had a housekeeper, Inez, who, as the years passed, became more and more of a caregiver. A big burly Jamaican who’d spew a mix of profanities in patois and English when rattled, Inez was my mother’s single greatest defense. 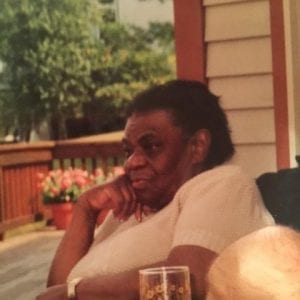 But all the other close connections abandoned her. Werner Forman, my ex-husband and Franyo’s closest and most beloved friend, stopped visiting her after Gustavo’s death. In the past he would travel to New York two or three times a year, always staying with my parents in their Park Avenue apartment, often for weeks at a clip. It was mi casa, tu casa, but once Franyo became a widow, Werner more or less disappeared. I understand that he had a fear of being pushed into the role of companion or “pseudo husband,” subject to Franyo’s many whims and fancies, but when he vanished from her life, he also vanished from ours, only rarely communicating with Jofka, his daughter. 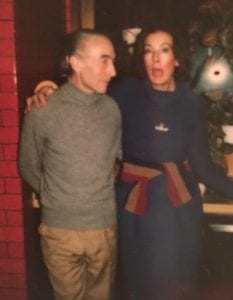 For Franyo this was a stinging blow and she complained about it often – where was Werner, why didn’t he come visit? I would receive long, bad-tempered phone calls on the subject and did not know how to respond beyond soothing “um hums.” That was the thing about Franyo: once she had a resentment against someone, she couldn’t let go of it. Her life became more and more filled with grievances, how this person and then that one had disappointed her and was no longer a friend. It grew increasingly difficult to be in her company. My sister, Vivi, thin-skinned about Franyo’s constant fault-finding, saw her as little as possible though she lived only a stone’s throw away, across the park. And I moved to Texas. 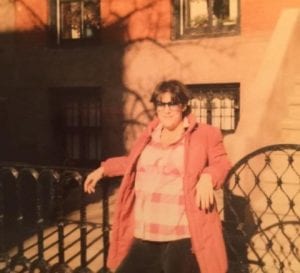 Me in front of Brooklyn house 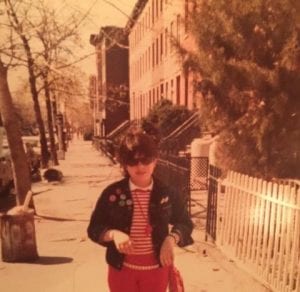 Jofka in front of Brooklyn house

We left for business reasons, but there was a subtext – secretly I wanted to get away from my mother. I would never admit that, of course. Closer to an acceptable truth was the fact that we now had three children (my son, Julian, was born in 1990) and life in New York was extremely expensive. And not safe. In our neighborhood you could leave nothing, not even a crumpled-up paper bag, in your car or someone would break in. One morning George left for work and came back five minutes later, scratching his head. Our totally empty car, parked just outside, had been broken into and the back seat had been stolen. The back seat! Poor car looked like a shiny, well-tended mouth with a gaping hole where a tooth had been knocked out. Well, that was it, the proverbial straw that broke the camel’s back. My late father-in-law had owned citrus groves in south Texas; George, a real estate lawyer, wasn’t crazy about his job, so we decided to relocate to the Lone Star State, oversee the groves, and basically start over. The furthest south we could move was Austin, then still a sleepy town. We sold our house in Boerum Hill, then a still truly crap neighborhood (now one of the trendiest in the five boroughs), called the movers and were off on our next adventure. For Franyo, a bitter, regal widow whose face was still beautiful, but whose mind was going, this was one of the worst desertions. 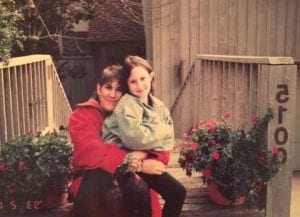 Gabi & I in front of our Austin home